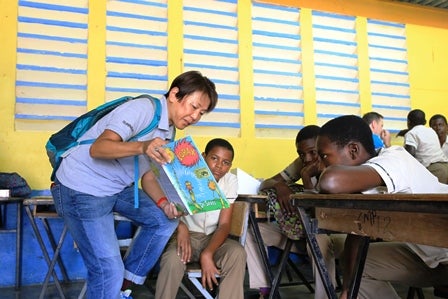 “The biggest headache is getting the men to walk away from certain things,” says Adenike Stephenson, when asked what gave her the most difficulties at her job as regional coordinator for the Citizen Security and Justice Program.

Those things are actually two: stopping kids from smoking marijuana first thing in the morning, which makes them lethargic for the remainder of the day.

And the second is a bit of a surprise: “Scamming.”

I’ll get back to scamming in a bit but first an explanation of why I was in a vehicle in the winding roads in the hills around Montego Bay with Stephenson and her colleague, Desmond Stewart.

The IDB’s Institutional Capacity of the State division held in Montego Bay its annual “knowledge week.” Around 65 IDB staff and consultants, armed with enthusiasm, books, sports and gardening equipment, scattered to several locations that were benefiting from the Citizen Security and Justice Program (CSJP), funded by the IDB and the Governments of Jamaica, the UK and Canada. Some painted school rooms or tutored at-risk kids. Others were playing a “Jamaica vs Argentina” soccer match in the sweltering heat (Jamaica won 3-2). And I was getting a quick education of what a citizen security program looks like from the ground up.

A few years ago, Stephenson explained, drug gangs battled for turf. Today, young people fight over phone leads. This brings us to scamming.

With a good list of phone numbers, a local youth can make over a thousand of dollars in a couple of days by calling gullible, mostly senior citizens in the United States about, say, collecting lottery winnings or owing back taxes. It is the Jamaican version of the Nigerian prince inheritance scam.

A good list, which is sometimes smuggled from local call centers, means lots of money. A bad one produces many calls that get hung up or go to voice mail. Young men will fight and kill over the spoils of a good list. And the Montego Bay area has become a hotbed for scammers.

Working with youths to lure them away from a life of marijuana and scamming is just one facet of CSJP. We visit a local school, where kids that fail an elementary school graduation test are put in the hands of Rohan Williams, a remedial teacher. He says he has to use creative techniques to engage these kids to read, such as a recipe to cook Jamaican dumplings, and coins to reflect costs and basic arithmetic.

At the Farm Heights Community Center, Orville Simmonds, the CSJP Senior Coordinator, is explaining how parents and youths are trained to develop better skills, and how they train mentors to engage with high-risk youths and their parents in counselling activities. He says the program is going to be subject to a rigorous evaluation so it was “critical to start in the right way.”

In the back of the room, a stark reflection of just how difficult it can be to contain violence in the surrounding neighborhoods. A half a dozen soldiers with big guns and flak jackets are getting ready to go out on patrol. They have cots in the community center because their barracks are far away. This is not the community policing tactics that most experts espouse, but Simmonds explains residents trust soldiers more than the police and their presence helps the community feel safer. They can’t make arrests so a constabulary officer goes out with them.

Later, Simmonds briefs us on CSJP. Now in its third phase, CSJP is one of our earliest and longest-running multi-faceted violence prevention programs, and results are encouraging. Between 2009 and 2013, murders declined 43% in communities benefiting from CSJP, against 35% in those that did not. CSJP also made people feel safer, with 44% saying crime had dropped versus 27% in non-CSJP communities.

Even so, crime and violence remain huge problems, absorbing 12% of Jamaica’s annual healthcare budget. One in four Jamaicans reported being victims of a crime in 2012-2013. Communities have a high violence tolerance and lack economic opportunities and channels to resolve disputes, he says.

Going forward, the idea is to focus in youths that are especially at-risk, such as those in prisons, or those who have been expelled from schools. He uses terms such as improved monitoring and evaluations, greater labor market “attachment” and changed behavior of both youths and their parents.

Adenike Stephenson and Desmond Stewart are helping make this happen on the ground. She says there are many success stories that make a difference, but challenges remain, including a stagnant economy that provides few opportunities.

“We reach a lot of young men, we give them the skills they need but there are no jobs,” she says. “So they are going to get back into what they were doing before.”

And for too many, that involves scamming.

Subscribe to our email blog alerts. Most blog postings are in Spanish