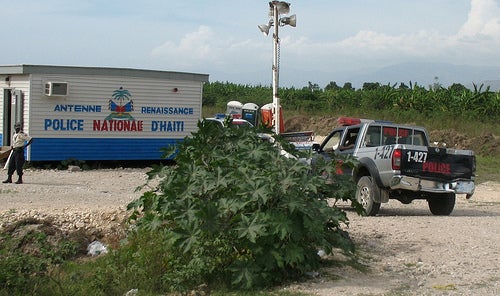 Until recently, abductions in Haiti were rampant and almost always happened the same way: ski-mask-clad kidnappers would surround a house, force entry, ransack the place and leave with a vulnerable victim—usually a woman, child or elderly person. The family would pay ransom, and if the victim was released alive, law enforcement would call it a success.

That began to change two years ago after the United Nations introduced anti-kidnapping support led by Robert Arce, a veteran American cop and law enforcement consultant who spent more than three decades on anti-drug, kidnapping and human smugging units along the U.S.-Mexico border and in Bosnia and Iraq.

Thanks to a strategy of cell phone log exploitation, community policing, and some cultural diplomacy, Arce helped Hatian police turn the tide on a limited budget. By the end of 2013, the number of people arrested for kidnapping had nearly quintupled. In the first nine months, police arrested 15 people for kidnapping; in the last three months, the number jumped to 72, and only one new kidnapping was reported, Arce told the Inter-American Development Bank during a phone interview from his home in Phoenix.

“What I encountered was a mess,” said Arce, who served as a U.S. Department of State anti-kidnaping advisor for Haiti’s National Police under the United Nations Stabilization Mission in Haiti (MINUSTAH) from August 2012 to December 2013. “There was a kidnapping almost every day, and a lot of victims were being killed. The police were demoralized and overwhelmed, and I didn’t know where to start.”

Even François Henry Dossous, chief of the Haitian National Police’s anti-kidnapping unit, was on the verge of leaving. But after the new strategies resulted in a few successful stings, Dossous rallied his officers behind the new program, says Arce.

The initial plan was to bolster police training and introduce more sophisticated equipment, not solve crimes current cases, but the bureaucratic red tape was endless. Besides, things could take a turn for the worse if equipment like a $300,000 Stingray, a cell phone triangulation device, got into the wrong hands.

To further complicate matters, Haitian law does not require phone companies to share phone records  with law enforcement. In fact, Arce was alarmed to find cops had never asked phone companies to cooperate with investigations, so convincing them to make that request would be key.

“Listen, you go to cell phone companies and I guarantee you they’ve known someone who’s been kidnapped,’” Arce told his unit.

Indeed, just about every phone company executive said they could relate, and most were willing to help, so officers worked with them to create a detailed log of calls tracking the suspects’ general vicinity. From there, they could hone in on them by developing neighborhood informants.

“When I started as a rookie cop in 1981, you’d go out and meet everybody in your neighborhood. You’d go fix broken doors and roofs as a way to gain the trust of the community, and they will start calling you with tips,” Arce explained. “It was the same in Iraq. You’d partner with the population, live in their neighborhoods, and also partner with the local media.”

In Haiti, the first barrier was linguistic. Arce says the United Nations had been recruiting cops from French speaking countries, but realized fewer and fewer Haitians are speaking French. Recruiting Creole speaking police of Haitian origin from Canada and the United States facilitated the communication.

Then came the challenge of operating in a tiny, impoverished nation run by powerful elites.

“One of the hurdles we had to overcome was small island politics where people know each other and favors are owed,” he said.

Arce relied on Haitian-American Brunel Bienvenu to execute his plan. The retired New York Police Department officer was well-versed in community policing and at mentoring other officers. He and the unit spent a lot of time talking to locals in target neighborhoods and monitoring Haitian radio and television talk shows to gauge the public’s willingness to cooperate in investigations.

“They were fed up with kidnappings,” said Arce.

Cops like Bienvenu harnessed this sentiment to gain community support and convince the media to set up a 24-hour kidnapping tips hotline.

“They were reluctant at first, but saw the positives when they started getting tips,” said Arce.

Maintaining that momentum was the tricky part. For instance, phone companies might have ties to the victims as well as the perpetrators, and nothing stifled morale like the murder of a kidnapping victim.

In March 2013, kidnappers abducted and murdered the 12-year-old son of a Haitian pastor who had returned to his homeland with his family after years living abroad to serve the 2010 earthquake victims. The boy’s body was found in a ditch with bullet wounds in his head.

The incident left Arce and his team totally distraught.

“I shed a tear for that kid,” said Arce, “but I told them, ‘we’re not doing any good if we feel sorry for ourselves.’”

The next day, police jumped into a heavier investigation, which culminated in the arrest of seven people. The public also responded with a tip about where the alleged shooter would be picking up his own eight-year-old from school. Police swooped in and arrested their suspect.

The work of the anti-kidnapping unit is one of several law enforcement capacity building programs taking place in Haiti. In fact, that unit is operating under Central Directorate of the Judicial Police (DCPJ) Director Normil Rameau, who spent three years training in Chile. He recently sent some of his top ranking officers to Colombia to train in tactical operations and intelligence gathering and analysis.

Arce believes Haiti’s law enforcement progress can be furthered with reforms to communications laws and the prison system. He wants investigators to have the ability to  subpoena records, and he believes getting prisoners to trial faster would ease discontent in jails. As it stands, most of the alleged kidnappers his team arrested are still being held without trial. The Haitian government is working with the United States Agency for International Development to address both concerns.

Arce recently left Haiti to take a full-time job doing similar advising with the U.S. Bureau of International Narcotics and Law Enforcement Affairs in Northeastern Mexico, but he is confident Haiti is in good hands.