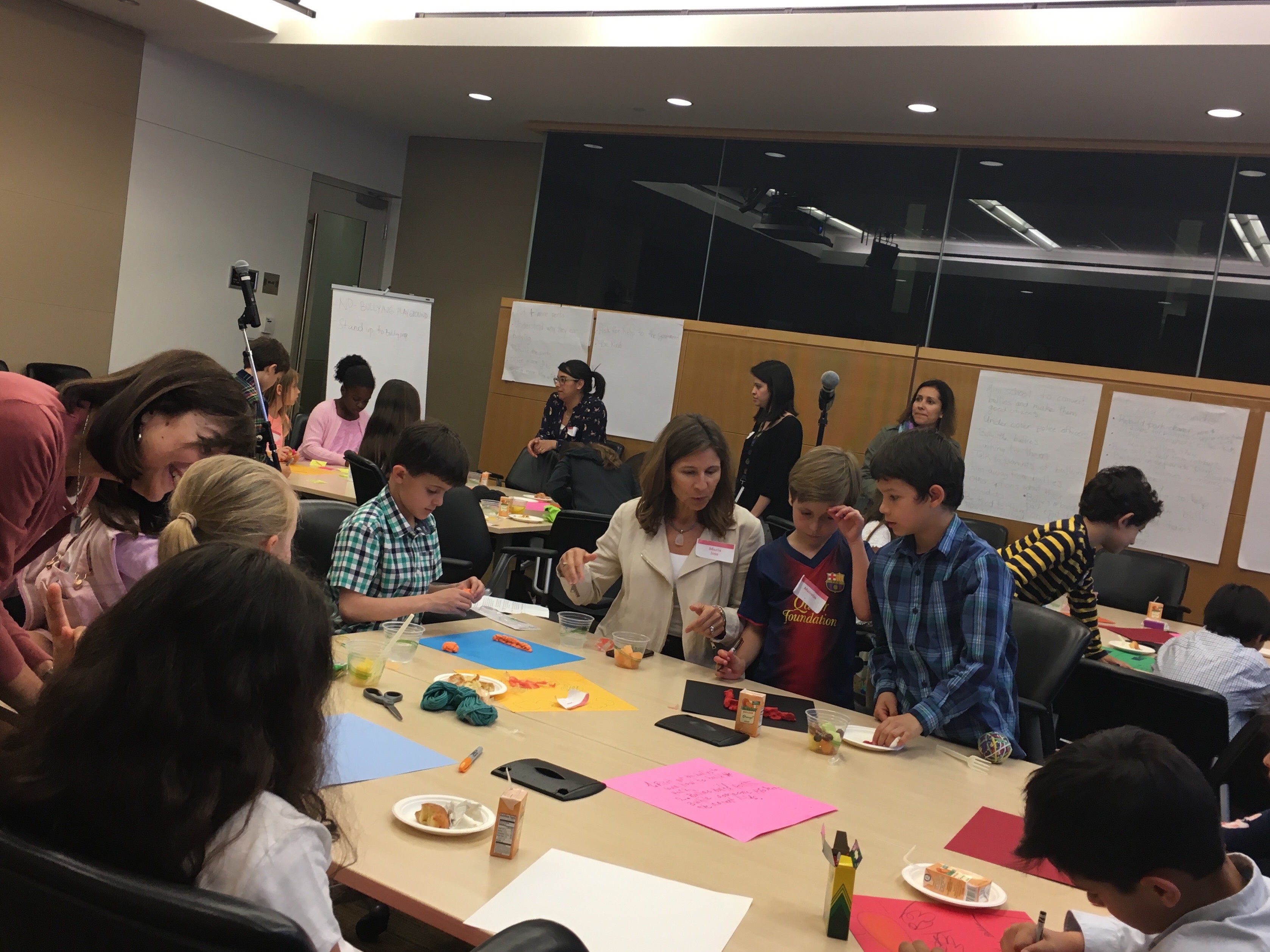 The crowd at our latest citizen security event at the IDB was not the usual one. No men in suits, no women in blazers, no government officials, no adults. Instead in our audience were 40 kids aged 8-10, in sneakers and dresses, spinning on their chairs, somewhat excited, slightly confused, very energetic.

As much as they seemed to admire their parents’ work, the daughters and sons of the IDB’s employees weren’t there to shadow them for “bring your kids to work day.” We wanted to hear what they had to say. How would they make one town in Latin America less violent?

Now, this is not the moment where you think I will summarize the unrealistic proposals of 8-10 year-olds. As it turned out, their proposals highlight key aspects that we, at the IDB, have identified as crucial for citizen security policies in the region.

The children participated in a design thinking process led by Design for Change, a global organization that has been recognized by the UN for its work with youth, using empathy, collaboration, and experimentation as a way to develop solutions for real-life problems.

The children were first  presented with a challenge (a low-income neighborhood with worn-down parks and too many bullies), and then were given the chance to brainstorm and critique their ideas to finally produce prototypes for their solutions. As part of the process, IDB experts in the topic discussed the challenges and the Bank’s work in violence prevention, police reform, and rehabilitation. Through our discussions and inspired by their ideas we drew three key insights:

1. Bullies are part of an ecosystem of violence

We can understand ‘bullies’ here as perpetrators of violence. Yet the children were the first to point out that it is not that simple. Perhaps a bully is a bully because he had to become a bully to not be bullied, they told us. Or, they also pointed out, that perhaps the bully’s parents don’t pay too much attention to him and haven’t had a chance to teach him wrong from right.

As is true for the region, perpetrators of violence are often victims of violence. In fact, homicide is the leading cause of death for individuals ages 18 to 25, and this same age cohort is also responsible for committing a significant – and in some cases growing– proportion of homicides. The fact that perpetrators of violence are often victims too has significant public policy implications. We know that children who experience or are exposed to violence earlier in life are more likely to engage in violent behaviors (Heise, 2011; Logan et al., 2016). This means that early childhood interventions can be effective in preventing future criminal behavior (Heckman et al., 2013). We have also found that, as the children noted, engaged parenting makes a difference in preventing violent behaviors (Ruprah et al., 2016).

The idea that bullies (read, criminals) can be bullies because of factors related to their families, communities, and personal histories, highlights the public health approach to citizen security policy, which increasingly emphasizes the need to address risk factors to successfully reduce violence.

The children suggested creating a ‘bully school’ where kids who are bullies would go to learn positive behaviors and have the chance to do fun activities without bullying. While not called ‘bully schools’, violence prevention projects that focus on specific at-risk youth are becoming more common and successful in the region (Berthelon and Kruger, 2011; Chaux, 2012). Programs that focus on developing ‘soft skills’ and helping youth make better decisions have also seen positive results (Lipsey and Landenberger, 2007). The idea that one would need a ‘bully school’ suggests, as is true for the region, that general schools (read, general social policies) do not always reach and support the most vulnerable populations.

Targeted interventions are also effective when it comes to policing. The children said that changing a bully’s behavior takes time, so police and other volunteers could come protect people in the park. This is exactly what hotspot policing does, focusing on areas where crime is concentrated. But we know (and so do the children, it turns out) that for these shorter-term control measures to be sustainable in the long-run, they must be complemented with longer-term prevention measures with at-risk populations (Buonanno and Vargas, 2017).

3. The best punishment is a chance to contribute

There were many ideas as to what could be done to a bully or a criminal, sending them to jail being the most common one. But one boy had a different plan. He thought that a better solution would be to get the bullies to help in rebuilding the worn-down park. He saw this as a win-win-win situation. First, the park would get fixed. Second, the bullies would have a kind of ‘soft punishment’ by having to rebuild the park. Others would see them work in the park, and would potentially be deterred from bullying. Finally, the bullies would feel more compelled to take care of the park and bring people to it because they had rebuilt it.

As this child seemed to know, there is overwhelming evidence suggesting that punitive measures often do not work in deterring crime or rehabilitating criminals (MacKenzie, 2006). We know, from our work and recent literature, that giving people a chance to contribute and be productive works better (Drake et al, 2009).

These and other ideas led to prototypes of all sorts, from renewed parks and bully schools, to devices that would help bullies calm down. But most importantly, the children sent a powerful message: they have clues for how to fix our region’s most complex problems.