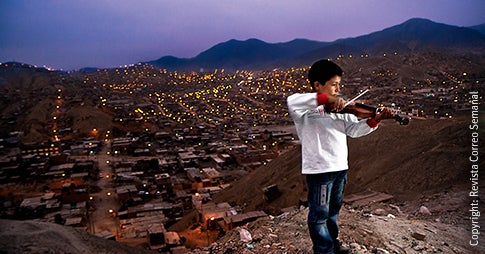 In 2005, Hurricane Katrina nearly wiped New Orleans off the map. As the city tried to regain its footing and rebuild, another element of the reconstruction became evident; the need to ensure that at risk youth, who were among the most impacted, had options upon their return to Crescent City. But what could be done to get these kids off the street in the midst of so much destruction?

Derek Tabb, the drummer for the 2012 Grammy-Winning Rebirth Brass Band, had an idea: to create an after school music program for these children: The Roots of Music Marching Band. In addition to learning about music, the youth involved in the program are provided with after school tutoring to ensure that they are not only able to excel as musicians, but also as students. And the best part of the program: it’s free and targets children from disadvantaged local families.

Music education is not a topic that generally is discussed as economic development. Yet, there are programs throughout the Americas that provide it to at risk youth. Is music a tool that we can use to support development effectively?

About 2,000 miles southeast of New Orleans, another music education program, the El Sistema program or the Venezuelan Youth Orchestra, has been thriving for nearly four decades. The program offers classic music training to youth and, although universal in nature, the majority of participants come from the poorest segments of society.

Due to its perceived effectiveness as alternative to violence and drugs, the program has grown from a small program with a modest budget to a worldwide model. A study has revealed that participants in the program have improved educational outcomes and employability.

The Sinfonía por el Perú (Symphony for Peru) program, based on Venezuela’s El Sistema, is similar to the Roots of Music Program in many aspects; it was founded by a renowned musician (Juan Diego Flórez) and provides musical education for at-risk youth. The Sinfonía is designed to promote these children and help them develop skills that go beyond music.

Finding programs that at risk youth want to participate in

The benefits of participating in Sinfonía por el Perú cannot be understated. Not only do youth involved learn to play an instrument and be a member of a premier band, an IDB-financed impact evaluation revealed that youth who participated in the Sinfonía had significantly higher rates of self-esteem than their peers, more interest in their school work and teacher reported improvement in behavior.

While these changes may not come as a shock, there was also a 29% decrease in expressions of physical and verbal violence among children compared to the control group and a 19% increase in the likelihood that Sinfonía por el Perú participants would follow through with a task to completion. These improvements in behaviors and attitudes have the potential to drastically improve future outcomes of these youth.

While music education programs differ from what we traditionally think of as development projects, the impact on children and their communities is compelling evidence of their importance.

It can be difficult to engage youth in traditional development programs due to the lack of interest. By finding programs that at risk youth want to participate in and find interesting, the development community can take an integral step towards integrating them into the larger development process.

Are there any other initiatives in your country that may be interesting for youth and spur more inclusive development outcomes?