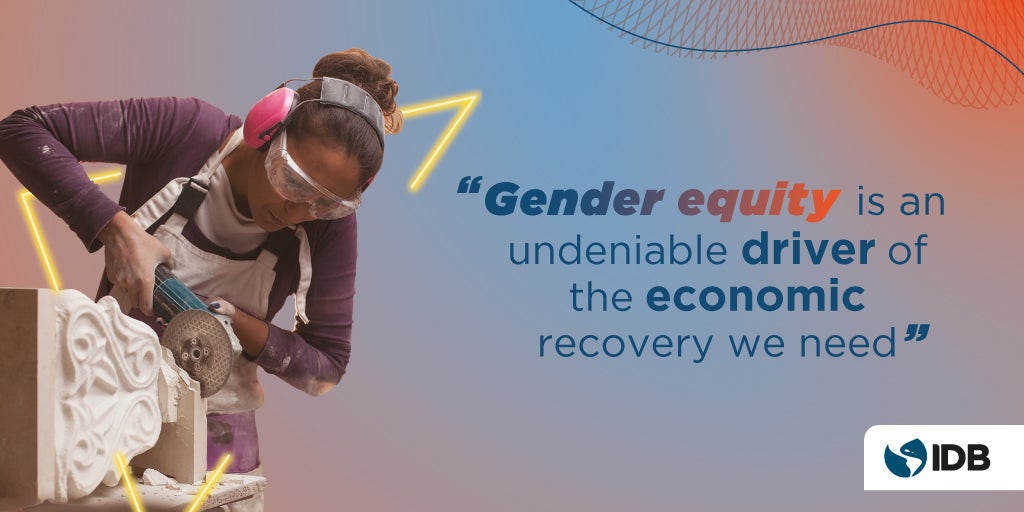 International Women’s Day gives us an opportunity to reflect on the gender gaps that persist in Latin America and the Caribbean. With a labor force participation 27% lower than men’s and a wage gap of 18%, these figures are the tip of the iceberg of deeper structural problems. The pandemic has undoubtedly helped to deepen these gaps.

Countries face unprecedented challenges to cover essential services with very little fiscal space. It is easy to be fooled into thinking that advancing gender equity is not a priority in this scenario. On the contrary, it is now more necessary than ever: the region’s GDP could grow by up to 22%.

Closing the gender gaps would change our reality. How? Here are some ideas.

First, companies would be more diverse and equitable.

A recent study of companies in the region reveals that only 15% of boards have female participation. Their presence is even lower in management: only 11% of companies have a female manager. However, in companies managed by a woman, the hiring of women is 22% higher than in those led by men.

Women strengthen dynamics between teams and bring diversity to decision-making. That is to say: if companies had gender parity in their leadership, we would see a parallel increase in equal hiring. This is equivalent to having more women with quality jobs and more productive and innovative companies.

To that end, at the IDB, we have promoted initiatives such as the WExChange platform, which connects entrepreneurs with investors and mentors. Or the project Growing Together in the Americas supports women business owners to integrate into the global market and regional value chains.

Second, women would have more time.

Unpaid domestic work benefits society because it contributes to the formation of human capital and provides essential care and protection to those who require it. However, while women in the region spend an average of 38 hours per week on these responsibilities, men only contribute 16 hours.

With an equal distribution of domestic responsibilities, women would have 11 more hours available each week, equivalent to 24 extra days per year.

Companies like Google, which have improved their maternity and paternity leave policies to promote more balanced participation in parenting tasks, report an increase in the retention of mother employees of up to 50%. In a more equitable region, parents could participate more actively in their children’s education and activities, contributing to their development and learning.

The IDB supports changes in labor regulations in Mexico, Guatemala, and Panama that seek to guarantee quality employment and the equitable distribution of care. And in Uruguay, we have supported the strengthening of the National Integrated Care System, which focuses on the care of dependent children and adults to reduce the burden on women.

Third, the tech jobs of the future would be more equitable.

Women are underrepresented in science, technology, math, and engineering (STEM) jobs. And these jobs are not only better paid, but they are also the ones that are going to grow the most. By 2025, it is estimated that 3,500,000 professionals will be needed to cover the needs generated by the digital transformation in the region. And in the public sector, an IDB survey indicates that more than half of managers lack talent with skills in data analysis and 40% in programming and software development.

Only 3 out of 10 math and computer science workers are women in our region. Without female talent, it will be impossible to fill these gaps. By promoting the participation of women in STEM, we would be creating quality and high-paying jobs while strengthening the competitiveness of our economies.

At the IDB, we work on initiatives that foster girls’ interest in these areas, such as the Little Adventurers program, developed with Plaza Sésamo (Sesame Street) and the Colombian Family Welfare Institute. We also promote their participation in STEM careers with campaigns like the one we did in Costa Rica to encourage enrollment in technical secondary education. And in Honduras, the INNOVAMUJER program supports the digital transformation of SMEs led by women.

An equitable region is not a dream.

None of these three scenarios is unattainable. Achieving them only depends on the transformations we are willing to undertake today. The IDB’s value proposition focuses on initiatives aimed at generating educational and economic opportunities for girls and women because gender equality is an undeniable driver of the economic and social recovery that we need.

Vice President for Countries of the Inter-American Development Bank Before joining the IDB, he was Minister of Economy and Finance of Ecuador. In 2019 he was named Young World Leader by the World Economic Forum, and in 2020 he was chosen Finance Minister of the Year in Latin America by the GlobalMarkets newspaper. Before that, President of the Ecuadorian Business Committee (2015–2018), President of the National Federation of Chambers of Commerce of Ecuador (2015), and Executive President of the Chamber of Industries and Production of Ecuador (2014–2018). He has a degree in Economics from the Pontificia Universidad Católica del Ecuador, a postgraduate degree in International Economics from the University of Barcelona, and a Master's degree in Business Administration from the IDE Business School. He has taken specialized courses at the Kennedy School of Harvard University, INCAE Business School, the Polytechnic University of Madrid, and various international organizations.