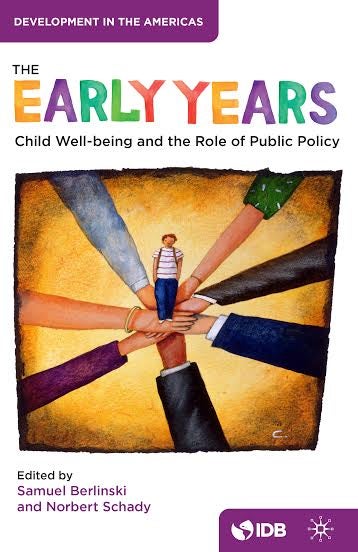 This article by Ariel Fiszbein was originally published on PREAL Blog. The Inter-American Dialogue has given permission to reproduce the text on the IDB’s blog “Ideas Matter.” To read the original article, click here.

The Inter-American Development Bank released last week its yearly Development in the Americas report. The Early Years deals with one of the most critical challenges in Latin America: closing the very serious gaps in development faced by far too many of its children. It does it in a clear, rigorous and systematic way. The book has all the ingredients necessary to become very influential and shape policy debates and thinking across the region.

The first thing the book does extremely well is documenting the state of child development in the region. It looks at a range of dimensions, from health and nutrition, to the development of cognitive and language abilities. It takes us into uncomfortable areas, presenting evidence of the incredibly harsh treatment received by children in Latin America. All of this is done in great detail, taking the reader by the hand in a review of material that even many of us that have looked into these issues for many years are not always familiar with. These chapters are so clearly written that we don’t realize that we have received a short lecture on the intricacies of measuring child development. At the end of this first part of the book we feel profoundly touched by the deep ethical challenge represented by the poor state of child development in the region. At the same time, this review gives us a clear sense of the potential economic and social gains countries in Latin America could experience if they would only invest more and better in their children.

The next step in the logical argument of The Early Years is showing us how to improve the welfare of children. In this regard, the book makes two extremely valuable contributions. First, it gives us a comprehensive perspective by focusing not only on the role of traditional health and education services, but also by looking at the role of families, communities and care-givers. Second, building on the tradition of rigorous scientific reviews, it carefully considers data limitations and evaluation methods to provide a balanced and systematic assessment of what works and what doesn’t work so well to improve child development outcomes. In this way we learn about the very large positive effects of early stimulation programs working with poor families in a systematic way. We receive a strong warning about the dangers of poor quality childcare institutions. And we are shocked by the evidence showing us how large the effects of having a good teacher are on the ability of children to learn.

The final part of the book helps us answer the difficult question of what to do. Very often, in topics such as this one we hear pontifications about doing more, calling on governments to pour resources into the expansion of services as the answer to problems at hand. The Early Years, however, takes a courageous stand and considers the cost-effectiveness of alternative approaches. To be clear, the authors have no doubts that Latin American countries must invest more on child development, and they say so very directly. But they are also clear that just throwing money at the problem is not the solution and that the massive expansion of services, particularly child care services, is too expensive and unlikely to yield the desired effects. Throughout, the authors keep their eyes on the imperative to reduce gaps between the poor and the less poor. Correspondingly they emphasize the priority of expanding high quality services for the most vulnerable, and avoid the more conventional call to universalize services –which in practice would end up as mediocre services for most children.

Early childhood development is catching up as a policy priority in Latin America. Governments in several countries have started to make it an explicit part of their policy agenda. While the challenges vary across countries, there are a number of common issues that an agenda for child development must address. All countries must still define a set of targets and indicators for early childhood development that guide public actions and serve as the basis to monitor progress. Addressing the cross-sectoral nature of child development programs requires strong coordination within governments. Budgets must be increased, and mechanisms for the management of quality child services must be strengthened.

The Early Years comes out at the right time. We may be close to a tipping point in the process of changing the way our societies invest in children. It is my sincere hope that the book will help us get even closer to that point.

*Guest Author: Ariel Fiszbein is the director of the Education Program at the Inter-American Dialogue. Prior to joining the Dialogue, Fiszbein was chief economist for the World Bank’s Human Development Network. A native of Argentina, he has a PhD in economics from the University of California, Berkeley.