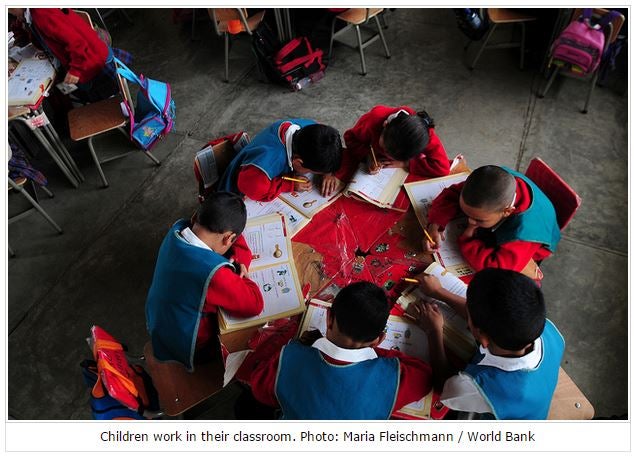 “Ensure that all girls and boys have access to quality early childhood development, care and pre-primary education so that they are ready for primary education.” This is one of many important targets set by the United Nations General Assembly on September 27, 2015. How hard will it be to achieve this goal by 2030?

Answering this question requires picking this target apart, as it encompasses two key —albeit distinct — issues: access and quality. The Inter-American Development Bank (IDB) 2015 flagship publication, The Early Years, is a timely resource to inform the discussion of these issues and the nature of this challenge not only for Latin American and Caribbean countries, but also other parts of the developing world.

The issue of access is the easiest to address as it all boils down to numbers. How far have Latin America and the Caribbean come in providing access to three important services: pre-primary education, daycare and parenting programs? The numbers are encouraging. The proportion of 5-year old children who are enrolled in kindergarten has soared in the last decade making universal access to kindergarten by 2030 an attainable goal.

Enrollment in pre-primary education for 3 and 4 year-olds is also on the rise. For working parents, access to quality care for their children is particularly important as it frees them up to work outside the home. The proportion of children who are in daycare (mostly publicly-provided institutions) has also increased (from a very low base) in the last decade—by a factor of two in Brazil and Chile, and by a factor of six in Ecuador.

Parenting programs that foster cognitive stimulating activities with caregivers at home reach only a handful of children in the region but new initiatives are starting to pick-up speed.
What about the quality of the services provided? Much progress is needed here. The quality of kindergarten and daycare is generally very poor and in many cases raises serious questions as to whether children are in fact benefitting from them.  Overall, compared to developed countries, and compared to the expenditures made later on in the life cycle, countries in Latin America and the Caribbean spend very little on the early years. In the region, for every dollar spent on a child 5 and under, more than three dollars are spent on a child aged between 6 and 11.
At first glance, these figures seem to suggest that countries simply need to spend more. To some extent, this is correct — governments spend too little on early childhood. However, more spending will do little to solve the problem of poor development in early childhood if resources are not spent well. In particular, it is critical to consider thequality of services (parenting programs, daycare, early schooling) provided to young children.
What is quality? This is perhaps the most difficult question to answer. At home, in daycare centers and in early school, quality refers to a large extent to the interactions of children with those who surround them. The interactions young children have with each other and with adults can shape a child’s brain in ways that have lifelong implications. When adults are sensitive and responsive to children’s cues and needs, they are fostering child development. When adults treat children harshly (as many in Latin America and the Caribbean do), they are hindering child development.
Since improving quality is, to a large extent, about changing the nature of the interactions of children with their caregivers, spending on physical infrastructure does not by itself help. Parenting programs do not require infrastructure, but they do require well-trained, carefully supervised home visitors who can establish a relationship of trust with families and deliver a given curriculum with high fidelity. Building state-of-the-art daycare centers does nothing for child development if inside those walls children are not actively engaged, encouraged, and stimulated.
Going back to our original question: how hard will it be to ensure access to quality early childhood development? Increasing access is straightforward, but improving quality is not. It is a painstaking task—more difficult than building roads or bridges, and much less glamorous than inaugurating new daycare centers. It requires moving slowly with the expansion of services, especially because access to daycare and preschool has already increased dramatically in the last decade in many countries in the region.
Improving quality does require more resources, but what is most lacking is capable staff—home visitors, daycare staff, teachers, coaches, supervisors—who can ensure that services actually benefit children. In the end, raising the quality of services provided to young children will demand time but it is an effort that for reasons of both equity and productivity countries can ill afford not to make.
***
This blog post was originally published on the World Bank education blog.