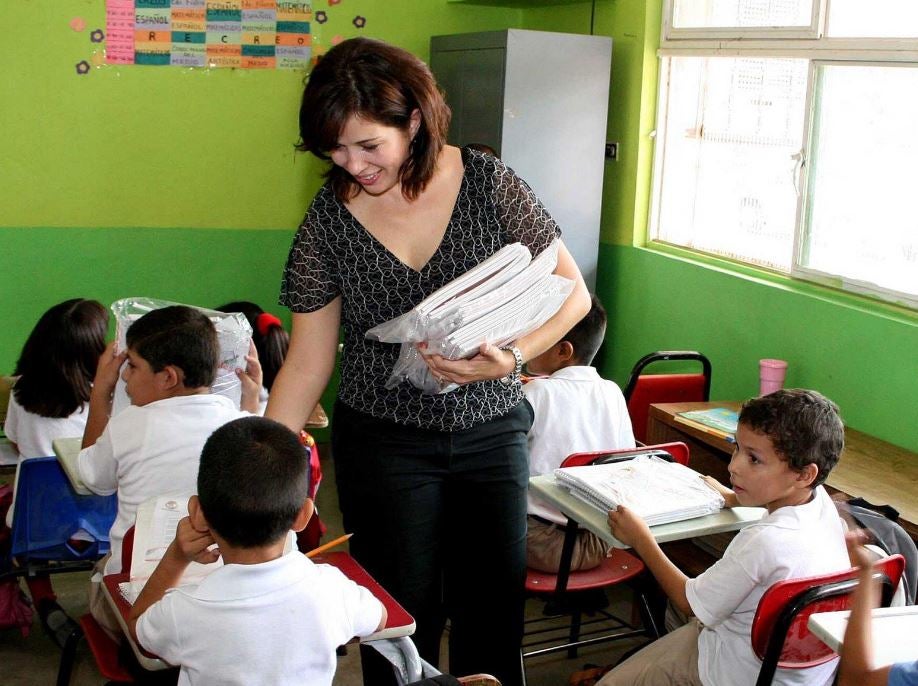 Today, October 5, more than 100 nations are celebrating World Teachers’ Day, honoring skilled teachers for the role they play in building strong minds and prosperous societies. The Inter-American Development Bank joins in that tribute. It applauds the many fine educators that work in Latin America and the Caribbean, commends their commitment and acknowledges their essential contribution to nurturing future leaders.

But the IDB also would like to use the occasion to call for improving teachers’ skills at the pre-primary and primary level, where so much critical learning takes place. Numerous studies show that early education is part of a cumulative process and propels the development of cognitive and other abilities needed in later years. Argentina implemented a large expansion of pre-primary education between 1993-1999. It  discovered that as a result beneficiaries performed significantly better on tests of mathematics and Spanish by the third grade. In Uruguay, children who had attended a pre-primary institution were 27% more likely to be in school than their peers at age 15. Early education, it appears, is not only valuable in-and-of-itself: it is the basis for later success.

Education coverage has improved. School attendance is nearly universal in the region for children between 6-9 years of age. Many countries have made a vigorous push to expand coverage at the pre-primary level.  And wealth is increasingly falling away as an obstacle.  In the Dominican Republic, for example, the difference in the proportion of 5-year-olds attending school between the first and fifth wealth quintiles fell from 33 to 7 percentage points between 2000-2013.  Chile and Panama also have reduced the wealth gap.

But if access to early education is on the upswing, its quality is not.  A series of  recent studies from around the region shows that young people in the classroom spend much of their time eating and in recess; that instruction is often dedicated to rote learning, and that students are rarely encouraged to develop creative or critical thinking through collaborative work in small groups.

Some education experts recommend structural changes. They talk of reducing class size, improving student-teacher ratios, and using better classroom materials and technology. Yet a large-scale review of educational interventions in more than 30 lower- and middle-income countries found that such innovations have little impact without a similar rise in the quality of teacher-student interactions.

What does that involve in practice? Effective teaching seems to occur when teachers provide emotional support to their students, encouraging their interests and points of view. It happens when teachers maximize meaningful activities, rather than reacting to behavioral problems or letting students wander, and when they offer high levels of instructional support. That doesn’t mean rote learning. It means stimulating critical thought and problem solving mixed with feedback that is deft and sharp.

A teacher’s ability to interact with her students in those ways makes all the difference.  A recent study of more than 200 schools in coastal Ecuador found that a child randomly assigned to a teacher at the 95th percentile in terms of possessing those qualities was at a considerable advantage. The child learned on average 0.18 standard deviations more than a child assigned to an average teacher. His abilities improved in a wide variety of areas, including language, math, and executive function.  And the improvements were generalized, with all children progressing by roughly the same amount, regardless of their baseline skills, their parents’ level of education, or their family income. In fact, teachers can help eliminate the gap between children of mothers with widely varying educational levels. The children whose mothers were elementary school dropouts and were assigned to the “exceptional” teachers in the Ecuador study, rather than an average one, made up one-quarter of the gap relative to children whose mothers graduated from high school—in just one year!

Studies in the United States have found similar results. In an op-ed in the New York Times, David Kirp notes that the difference between child outcomes from Pre-K education in Boston and Tennessee is teacher quality. The lack of results in Tennessee can be traced to teachers who are essentially “left to their own devices” while Boston Pre-K teachers undergo extensive coaching and follow a creative, challenging curriculum.

The challenge is getting teachers up to speed. Personalized coaching for teachers is one option, especially if the training is hands-on, rather than theoretical. Monetary rewards for excellent performance is another, while dismissal or early retirement of teachers that consistently underperform  may be a necessity in many instances. There is no one size-fits-all policy; nothing that works equally in all places. But given the benefits for children, for the adolescents and adults they will become, and for the countries they live in, desperately in need of critical, creative thinkers and problem solvers, the stakes could not be higher. Excellent teachers help build democratic and dynamic societies. World Teachers’ Day provides an opportune moment to celebrate excellent teachers and to call on all teachers to strive for such excellence.

The importance of teachers to early child development is just one of the issues discussed in the 2015 edition of the IDB’s flagship series, Development in the Americas, entitled The Early Years: Child Well-being and the Role of Public Policy. Click here to receive updates on this upcoming book and a free PDF upon publication.