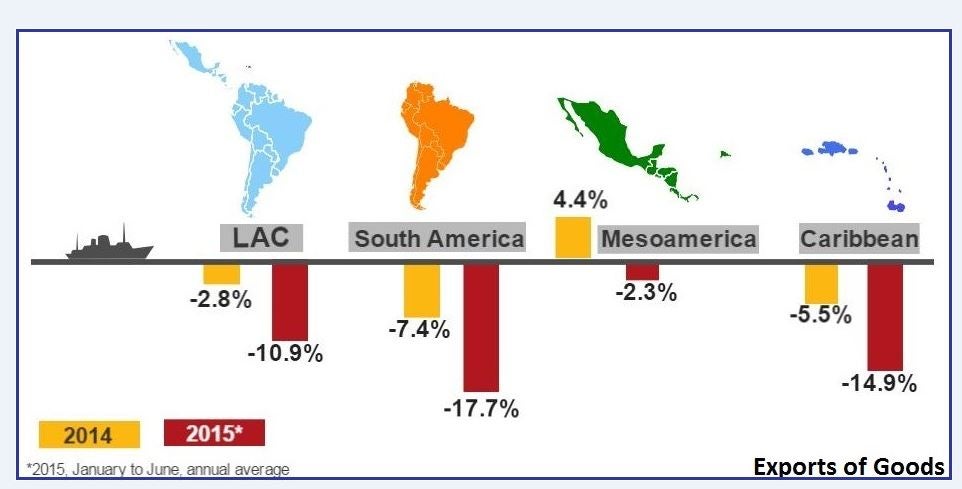 According to the latest edition of the Trade and Integration Monitor of the IDB, exports from Latin America and the Caribbean fell at an annualized rate of 10.9% in the first six months of 2015 compared to the same period in 2014 – the biggest drop recorded since the trade collapse of 2009. The total for the year is therefore expected to stay in the red, like the two previous years. This double-dip is part of a general trend that is hitting the whole global economy.

Why such a large drop?

First, a shock to the terms-of-trade due to the collapse of international commodity prices. In the period under analysis, these prices fell on average 37%, with larger drops in the case of oil (48%) and iron ore (46%). The impact on regional exports was dramatic since commodities represent 77% of total exports, excluding Mexico which is atypically specialized in manufactures.

Second, weak global demand: in particular, slowing demand for commodities as the deceleration of the Chinese economy was not compensated by the unstable recovery of the United States and the European Union; and the drop in intraregional demand that had a strong effect on the sales of manufactures. Comparing the annual growth rates of imports of these four regions from Latin America between the boom (2003-2008) and slowdown (2011-2014) periods, Chinese demand fell 46 percentage points, intraregional and EU demand fell 26 points, and that of the U.S. 10 points.

Third, a sustained appreciation of the dollar, whose value with respect to a broad basket of currencies has increased 15% since the middle of 2014. The appreciation has a direct negative impact on the value of regional exports measured in dollars, and an indirect impact as it depresses commodity prices. As a result of the appreciation of the dollar and of the terms-of-trade shock, the currencies of several Latin American countries have been depreciating rapidly, as is the case of Colombia (48%), Brazil (45%), and Mexico (23%).

With these developments in the trade outlook, policymakers throughout the region are losing sleep over several questions: How long will this last? Is the worst export drop over? What can governments do to help the private sector get out of the crisis?

The Trade and Integration Monitor attempts to answer these questions. In a nutshell, it argues that the factors that caused the crisis are not transitory and there are risks that this phase of export contraction extends into next year. However, it also indicates that the region’s trade outlook could improve with ambitious policies that promote trade diversification. A detailed analysis of the diversification patterns over the past decade indeed reveals some promising signs that may serve as a basis for relaunching the export sector.

Despite the high concentration in commodities, in the boom period some countries, such as Panama or El Salvador, had success in adding new markets and products to their export baskets and diversified their exports at rates exceeding 10% per year. Unfortunately, though, the diversification process has stopped in the slowdown period.

On the other hand, although the majority of the countries of the region have seen a concentration in products that are losing dynamism in global markets, there are success stories like those of Mexico, Costa Rica, or Bolivia that overcame the adverse global economy and gained world market shares by more than one percentage point.

Furthermore, in the slowdown period, it was precisely the extensive margins of trade growth – that is, the diversification efforts – that helped to contain the export collapse. However, this diversified growth occurred almost exclusively by placing existing products in new markets, with very limited development of new products.

Finally, the services sector offers an avenue for diversification considering that the region has the opportunity to close a significant gap, particularly in the exports of knowledge-intensive services.

It is therefore necessary to redouble efforts to open new markets, in particular for those countries that have stayed on the sidelines of the major market access negotiations of the past decades. The experience of the members of the Pacific Alliance or of the Trans-Pacific Partnership whose negotiation has just ended are indicative of the importance of opportunely positioning themselves in the trade regulatory space of the next decades. On the other hand, it is urgent to support the internationalization of the private sector with policies that facilitate the sale of new products, and that help to keep active the trade linkages created in the boom years.

The current crisis will have a transformative impact on the prospects for the global integration of Latin America. The capacity of businesses to diversify the region’s export supply, and of governments to support their efforts, will determine the welfare of millions of Latin-Americans.

*Paolo Giordano, Principal Economist of the Integration and Trade Sector of the IDB.

Paolo Giordano is Principal Economist of the Integration and Trade Sector of the Inter-American Development Bank. He is an expert on trade policy, economic integration, and regional cooperation in Latin America and the Caribbean. An Italian citizen, he holds a Ph.D. in Economics from the Institut d’Études Politiques de Paris – Sciences Po, a Master’s degree from the Bocconi University, and completed his studies at the Kennedy School of Government at Harvard University.