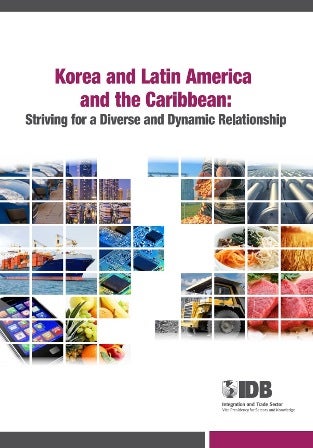 Trade and investments between Asia and Latin America have been booming in recent years. But the relationship can become much richer and deeper provided Latin American and Caribbean countries understand how Asian countries share similarities, as well as important differences.

Korea provides a compelling example. A new IDB report released ahead of the Bank’s Annual Meeting in Busan, Korea, Korea and Latin America and the Caribbean: Striving for a Diverse and Dynamic Relationship, highlights the region’s trade and investment with this original Asian tiger.

In some ways, economic relations with Korea mirror a broader Latin America-Asia pattern: trade and foreign direct investment (FDI) have experienced fast growth, with trade between Korea and Latin America and the Caribbean increasing at an average annual rate of 17 percent and FDI flows from Korea to the region expanding more than ten-fold since 2004. In terms of composition, Latin American exports to Korea consist largely of agricultural and mineral resources, while its imports are primarily manufactures. 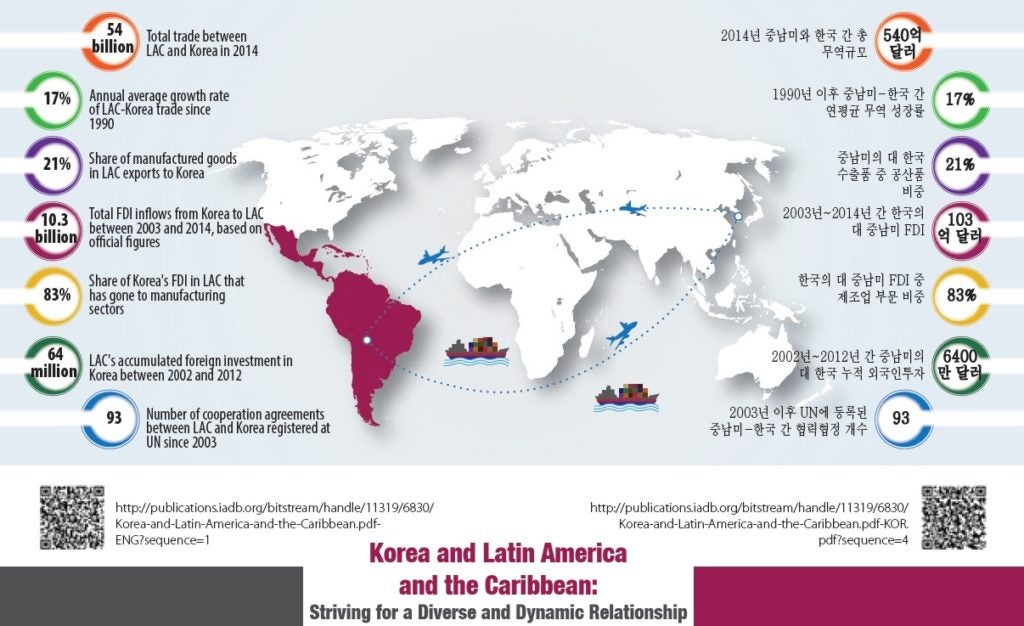 This should come as no surprise given the region’s abundant mineral deposits, freshwater resources and agricultural land and Korea’s scarcity of these resources. However, a closer look shows that the ties between Korea and Latin America and the Caribbean diverge from the typical Latin America-Asia story in several important ways.

Likewise, the degree of product concentration in Latin America and the Caribbean’s exports to Korea is also considerably lower than in exports to China and other East Asian emerging markets. Even within the broader pattern of commodities-for-manufacturing trade, Korea thus provides the opportunity for the region to export a more diverse and higher value-added product basket.

The clearest difference in the region’s economic ties with Korea, however, can be seen in the composition of FDI flows. Investment from Korea has overwhelmingly targeted manufacturing sectors (which received 83 percent of total Korean FDI in Latin America and the Caribbean from 2003 to 2014), in sharp contrast to investment from China. Korean multinationals, which include some of the world’s largest and most innovative firms, are currently making fuel-efficient automobiles, high-definition TVs, and satellite equipment, among many other products, in countries throughout Latin America and the Caribbean.

As the report describes, these investments generate employment in high-skilled jobs, add to the region’s productive capacity, transfer important technology and know-how to the region, and create opportunities for forward and backward linkages. They also boost Latin America and the Caribbean’s ability to export high-value added goods with strong global demand, as Korean firms have increasingly used investments in in the region as an export platform for the North American or regional markets. The presence of Korean firms thus helps the region’s economies diversify and upgrade their productive structures, which is especially important as they face a period of slowing demand for their traditional commodity exports.

The report takes a closer look at the experiences of two Korean firms with a large and longstanding presence in Latin America and the Caribbean, LG Electronics and Hyundai Motors. LG, a global leader in high-end consumer electronics and home appliances, first entered the Mexican market in 1988, and has consistently expanded and diversified its operations since then. The firm recently announced it would produce Google TV (internet-enabled televisions) in Mexico, an example of how foreign investors can help bring the region to the technological frontier. LG’s large manufacturing presence in the country—which includes four production plants across three states—has in turn generated demand for related services. LG’s subsidiary Hi-Logistics recently invested in a logistics system to better connect its various operations in Mexico.

Hyundai Motors, the world’s fourth-largest car maker, has enjoyed considerable success in Latin America and the Caribbean and especially in Brazil, where it has invested an estimated $1.7 billion since first establishing production facilities in 2004. The company has also offered internships to Brazilian engineering students through a government training program, demonstrating how FDI can contribute to human capital formation in host countries.

Korean investment has not been confined to the region’s two largest economies, however. While Brazil and Mexico continue to account for the bulk of Korean FDI, the share of announced investment projects in other Latin American and Caribbean countries has increased consistently since 2003. Argentina, Venezuela, Central America, and the Caribbean countries have increasingly been the target of new investments by Korean firms.

Of course, the benefits of these investments flow in both directions. Investing in LAC has helped Korean firms consolidate their presence in the region’s growing consumer markets and—especially in the case of Mexico—establish a strategic export platform to third countries. In fact, the region has become an increasingly relevant destination for Korean investors, with Latin America and the Caribbean’s share of Korea’s total outward FDI reaching 8.1 percent during the first nine months of 2014—up from 2.4 percent in 2004.

The experience of the last decade and a half clearly shows that Korea provides opportunities for Latin America and the Caribbean to forge more diversified trade and investment links to Asia—an objective that takes on heightened importance as Asia’s demand for the region’s traditional commodity exports slows. To take full advantage of this scenario, Latin American and Caribbean governments should work to address remaining obstacles—chief among them high transportation costs, tariff and non-tariff barriers in key sectors, and information constraints.

*Theodore Kahn is a consultant for the Inter-American Development Bank and contributed to the Korea-Latin America and the Caribbean study.

To learn more about Korea and Latin America, visit our Annual Meeting website with links to more studies, videos and other materials.