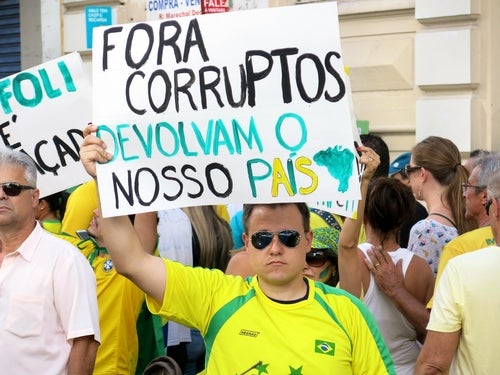 It has been a good couple of years for those fighting corruption in the Americas. Since May of this year, the leaders of the New York State Senate and Assembly were sentenced to terms ranging from 5-12 years in prison on charges including bribery, extortion and money laundering. A federal congressman from Philadelphia was convicted on more than two dozen charges, including racketeering. And the speaker of the Alabama     Assembly was found guilty of ethics charges that could see him behind bars for decades.

But by far the biggest progress has been in Latin America. There, entire populations rose up in revolt against graft. It started last year in Guatemala where thousands of people took to the streets to force the resignation of the vice-president and president in a bribery scheme involving the nation’s customs administration. It spread in 2016 to Brazil. Millions turned out in peaceful demonstrations against corruption at the state-oil company Petrobras. Former President Dilma Rousseff was impeached, dozens of people were convicted, and more than 160 businessmen and politicians were indicted. Similarly, there have been large protests in Honduras against alleged theft from the nation’s health care system; an investigation into fraud in the administration of former Argentina President Cristina Fernández de Kirchner; and a package of new laws in Mexico that impose steeper penalties for corruption-related crimes.

Latin America still suffers from a deep-rooted culture of kickbacks, bribery and tax fraud. The nongovernmental organization, Transparency International, compiles rankings each year of the world’s most corrupt countries based on input from research organizations, risk analysis corporations, and financial institutions. Latin America as a region typically performs terribly. In the 2015 report, covering 167 countries from the least to the most corrupt, Uruguay (21) and Chile (23) were the least corrupt countries in the region, just a few spots down from the United States (16). Brazil stood at 76; Argentina and Ecuador were tied in the 107th spot, and Haiti and Venezuela were the most corrupt, tied at 158th with Guinea-Bissau.

But change is in the air. If bribes and crooked contracts have long been seen as ways to grease the wheels of government, social and institutional reforms are making them both less acceptable and harder to get away with. A growing and vibrant middle class, no longer afraid of dictators as in the 1970s and 1980s, is demanding better government and services. The siphoning off tax revenues, especially during periods of economic hardship like the present, is ever less tolerated. Judges and prosecutors in many countries, including Brazil, have become more sophisticated and independent. And Facebook and other forms of social media make corruption allegations go viral, leading to intense pressure for investigations and protests.

In 2008, the Colombian government launched the Citizen Visible Audit (CVA) program intended to help local communities fight corruption in education, health, and other areas of public contracting. Under the program, local projects were discussed in advance at forums where communities were informed of their rights to act as monitors. Local authorities and contracting firms committed to meet with the communities to hear complaints, and facilitators were created to serve as a bridge to authorities in local or national government if problems persisted. The results, as revealed in an IDB study, showed that in participating communities, the number of citizens reporting overall satisfaction with the projects climbed around 23%, and communities’ evaluations of their politicians performance increased by 15 percentage points. Citizen oversight, it turned out, could affect local services. Projects could be made more transparent; politicians, more accountable.

Moreover, that pattern may well be self-reinforcing. In another IDB study, Costa Ricans were subject to an experiment in which they received a flyer informing them of a Latinobarómetro survey showing that the percentage of their compatriots who had personally witnessed an act of corruption had increased significantly in recent years. They were then queried about their willingness to bribe a police officer to avoid paying a traffic ticket. The proportion of respondents willing to offer a bribe after seeing the flyer about growing corruption rose by 28%, compared to a control group. Perception of society as a whole mattered; corruption corrupted. But might not honesty breed still more honesty, as the vicious circle was transformed into a virtuous one?

The evidence of recent years suggests this is indeed the case. People protesting in the streets in greater numbers and prosecutors increasingly pursuing illicit political activity offer hope of a positive force building on itself. If politicians in large numbers now begin winning elections on the basis of better services and clean governance, the region may pass a critical juncture. It may find itself not only occupying the higher spots on Transparency International’s annual rankings but reaping the benefits in robust development, poverty reduction, and greater equality that clean government promotes.