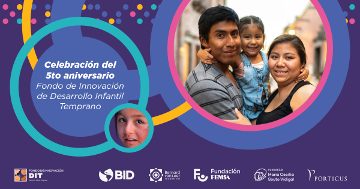 More and more people and institutions acknowledge that the foundations of children’s cognitive, language, motor and socioemotional development are laid during gestation and the first five years of life. Based on this certainty, the Inter-American Development Bank (IDB) has promoted investments, research, and interventions in favor of children’s development in the region over the last 15 years.  Among these efforts, five years ago we created the Early Childhood Development (ECD) Innovation Fund, a valuable partnership to finance, design, implement and evaluate innovative and scalable solutions.

On its fifth anniversary, we celebrated important achievements and contributions to the early childhood agenda.

In its first five years, the ECD Innovation Fund developed a portfolio of 25 projects in 10 countries in the region, and invested a total of US$12.6 million. During this time, it generated new knowledge having an impact on early childhood development policies in the region.

These are five examples of the Fund’s work that have achieved positive results:

What is the future of early education?

In the post-pandemic period, it is essential to prioritize early childhood education in the region in order to mitigate the serious losses that have been calculated as a result of the temporary closure of preschools.

In this regard, we took the opportunity of the ECD Innovation Fund’s anniversary to discuss the topic in a webinar entitled What is the future of early childhood policies in Latin America and the Caribbean? The event was attended by authorities from the region, experts, innovators and key stakeholders in the ECD community.

In a panel moderated by Luciana Vázquez, columnist for La Nación, we spoke with María Inés Castillo, Minister of Social Development of Panama; Paula Valenzuela Delpiano, Head of the Promotion and Prevention Division at the Undersecretary of Children’s Affairs of Chile; and Paul Gertler, Professor of Economics at UC Berkeley. The panelists highlighted the importance of intersectoral work among social protection, health and education systems to have a sustainable impact on the early years of children’s lives.

In addition, outstanding examples were shared, such as Chile Crece Contigo, which serves children from gestation to 9 years of age; Panama’s Law 171 on Comprehensive Early Childhood Protection, which seeks to improve the quality of preschool education centers throughout the country; and the pioneering studies carried out in Jamaica that demonstrate the impact that high-quality early childhood services can have on children into adulthood.

The dialogue made it possible to reaffirm, once again, the urgency of increasing, improving and sustaining investment and interventions in early childhood.

By doing so, we will guarantee a better present and a better future for the region.

To stay connected and learn more about this innovative work, we invite you to explore the Knowledge Hub on Early Childhood Development, where you will find details of this and other projects, resources and very useful information on ECD.

The Early Childhood Development (ECD) Innovation Fund is a partnership to finance, design, implement and evaluate innovative and scalable solutions to improve the lives of children in Latin America and the Caribbean. The Fund is coordinated and managed by the Inter-American Development Bank (IDB), in partnership with FEMSA Foundation, Maria Cecilia Souto Vidigal Foundation, Open Society Foundations, Porticus and the Bernard Van Leer Foundation.

Do you think the region needs more investment in early childhood development? We want to hear your opinion! Leave us a comment.

Florencia Lopez Boo is a leading economist in the IDB's Social Protection and Health Division, where she works on child development and poverty reduction projects. She was a professor at the University of Louvain and worked at the World Bank and UNIDO. She has a PhD in Economics from Oxford University (Clarendon-Oxford University Press award). She is also a Young Lives Research Associate at the University of Oxford and the Institute for Labor Studies (IZA) in Bonn. Twitter: @florlopezboo