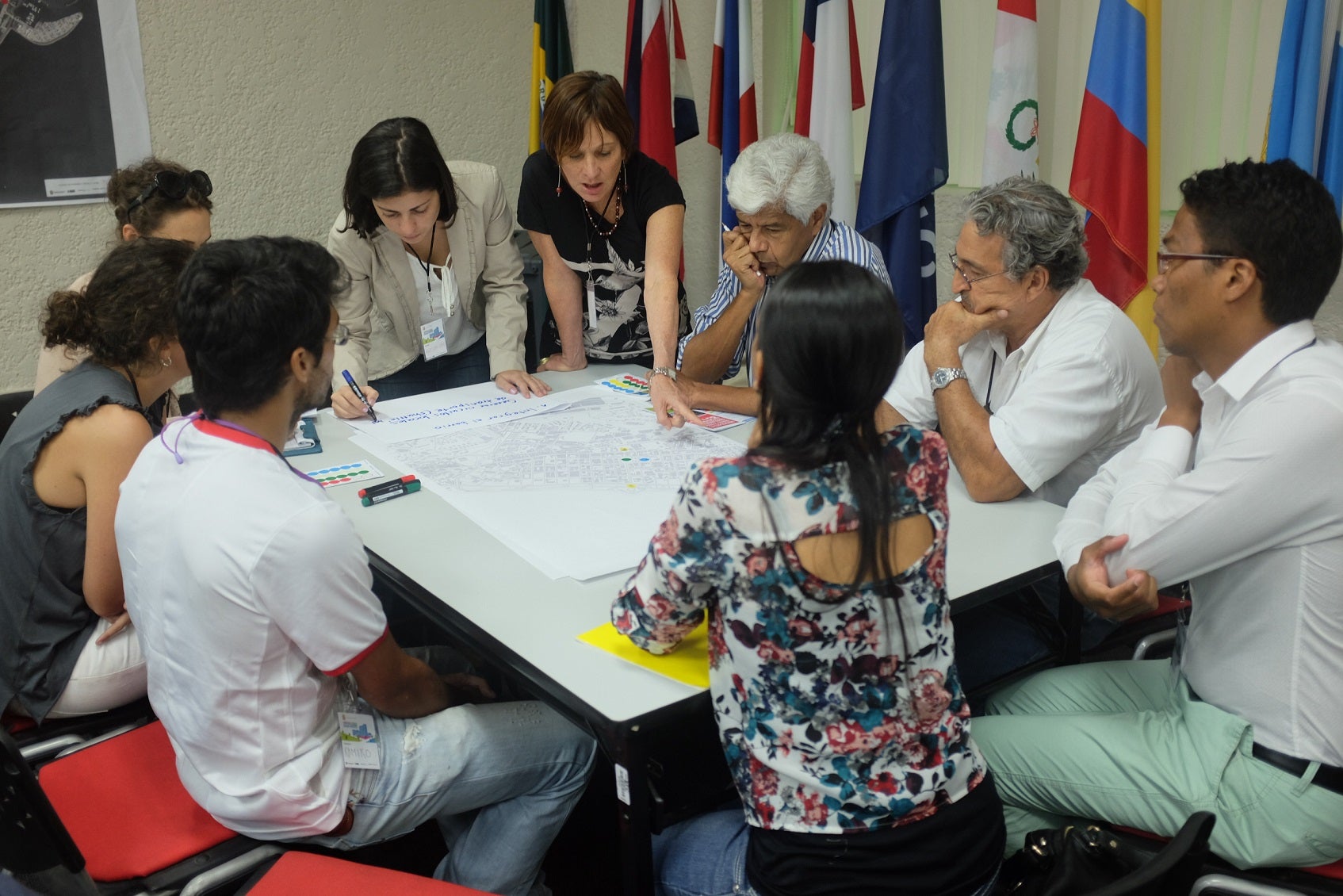 In April 2015, together with the University of Panama (UP) and the Institute of Urban Design of the University of Technology of Vienna, we organized a Summer School of Architecture in Panama City for approximately 50 students from Panama, Austria, Argentina and Italy. In only ten days, the young planners developed a number of urban strategies and design proposals based on the results of a participatory process held earlier this year.

Eight international groups of young architects developed strategic urban projects for “La Exposición” neighborhood in Panama City in the realm of affordable housing, culture, sport facilities and new accessible public space. These projects will be finalized and presented to the community by the end of June. We will then test these new ideas with the population through workshops where participants will be able to make adjustments to the proposals. If the population likes them, these ideas will find their way into an urban strategy for the neighborhood.

Reaching out to the community

Participation has become the new state-of-the-art methodology in the planning world—or at least the one everybody is talking about. However, there is a big difference between participation and empowerment, and empowerment is precisely the goal of the Panama Urban Lab. So here is the deal: Information is crucial to inform citizens of what’s going on in their city, and if we go further and activate the community by using this information, we can call this process empowerment.

At the Urban Design Lab we believe that the concept of empowerment should be taught as part of the university curriculum. In order to empower the stakeholders in Panama, we organized something new in the city: Since February 2015, our team of urban specialists from the Emerging and Sustainable City Initiative of the Inter-American Development Bank, together with the Municipality of Panamá and Universities from Panama and Austria, have been working on an Urban Design Lab: a participatory project for the urban regeneration of the Barrio La Exposición in Panama City. This neighborhood has a strategic position in the city: back in 1915 it was the one and is still the only publicly funded urban extension project of the City of Panamá.

Plan of Panama City and the “La Exposición” neighbourhood in 1915, Fuente.

A model for urban development

The barrio “La Exposición” was conceived by visionary Panamanian President Belisario Porras (1865 – 1942), who wanted to promote Panama and its new canal in the world. In the early 1900, Porras promoted the implementation of major public works, new laws, institutional reform, and the construction of Barrio “La Exposición”, where a universal exhibition was held in 1915.

Today, the Barrio has an extension of approximately 100 hectares and 20.000 habitants. It has a well-planned urban grid and is full of interesting neoclassical and Art Deco architecture of the 1930s and 1940s. Unfortunately, the Barrio is partly run-down today—especially the western part close to Plaza 5 de Mayo. There are no sidewalks, the infrastructure is broken, and more and more people are moving out, losing 10.000 habitants in the last 20 years in spite of the city’s rapid population growth.

The construction of the metro line— the Línea 1—gives the Barrio a new perspective. It has plenty of vacant land populated with mono-functional warehouses and ruins. According to Mayor José Blandón, the Barrio’s 100-year anniversary is a unique opportunity for its revitalization through affordable housing projects, accessible public space and social incubators like a public library.

Based on the community’s visions and scenarios, the students developed integrated urban strategies and conceptual urban projects. Foto: J. Lehner, 2015.

In February 2015 we created a dialogue with the community. For two days, a public participatory workshop was held in the barrio “La Exposición”. Approximately 80 residents followed our call for participation: neighbors, shop owners, workers and local architects and planners worked on a multi-sectorial assessment of challenges and opportunities and developed possible solutions in fields such as housing and public space. The group developed various planning scenarios of the future development of the area, including concepts for re-population and re-densification of the area. The center of the consultation process is the transformation of the barrio and Plaza Porras into a new (civic) center for Panama City.

A key element in this process is to test new ideas, and large student groups are perfect for that. Even the most far-fetched (and sometimes quite unrealistic) ideas provoke a discussion and a dialogue in the community. By reaching out to a supporting critical mass of local actors, this methodology creates a sense of ownership towards new ideas and projects from the first day. Additionally, by including the academic sector in the process, the city can create opportunities not only to test these ideas, but also for the universities to reach out to the real world.

Mayor José Blandón and Deputy Mayor Raisa Banfield accompanied the design process and opened the very well-attended presentation of the results at the Sociedad Panameña de Ingenieros y Arquitectos (SPIA) in April this year. In mid-July, we expect to have the final results of the Urban Strategy for “La Exposición,” as well as to define key urban projects to start the urban regeneration process right away.