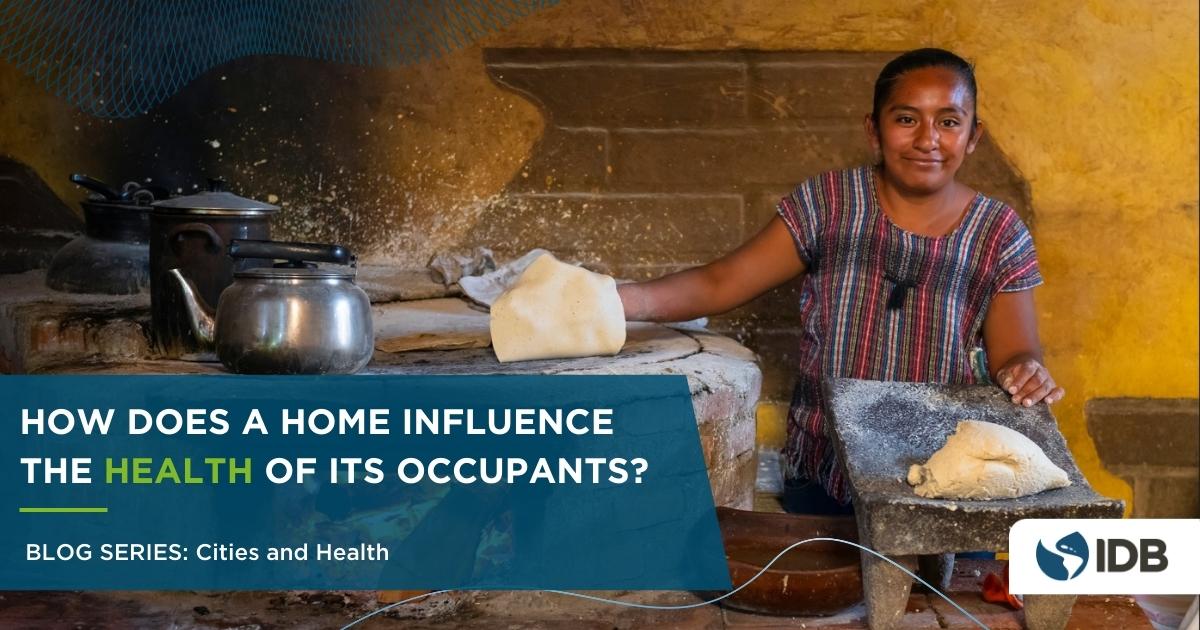 The quality and location of housing has direct implications for the health of those who inhabit it. There are many studies that support how the fact that residing in an adequate housing unit contributes to improving household’s health. That a home has access to water and sanitation services, in a safe area, and located close to health care and education services greatly affects the health of the entire family.

On World Health Day, at the IDB’s Urban Development and Housing Division, we want to address the direct relationship between health and housing. This blog, that is part of a series about Healthy Cities, can be very useful for cities and municipalities that are working on public policies aimed at improving the health of their residents, since these policies must be coordinated with those carried out at the neighborhoods and home scales.

Informal neighborhoods: when poor sanitation infrastructure is a source of disease and pollution

An example of the multiplicity of factors linking health outcomes and housing conditions are the health challenges residents in informal neighborhoods face daily. These neighborhoods, which are home to more than 105 million homes in Latin America and the Caribbean (LAC), lack access to one or many basic municipal services. Among them is included the lack of electricity, water, and sanitation; safe public spaces; and qualitative education and health care services. For example, in Argentina, it is estimated that more than 98% of households in informal neighborhoods lack access to municipal sewerage services and almost 94% lack a connection to water services.

The inadequate sanitary infrastructure in these neighborhoods makes them hotbeds for endemic diseases, such as malaria, zika, and dengue. For example, a georeferenced study of dengue cases in Rio de Janeiro identified a correlation between the presence of informal neighborhoods and the main loci of infections. Likewise, in Salvador de Bahia, the risk of leptospirosis is four times higher for households lacking sanitation. These shortcomings made informal neighborhoods ill prepared for coping with the COVID-19 pandemic. The reason why?  poor housing conditions make self-quarantine impractical and the rapid spread of infection highly likely.

In addition, residents of informal neighborhood are particularly vulnerable to environmental hazards and climatic events. For example, while waste collection in LAC has a relatively high levels of coverage (90%), only a few large cities, such as Rio de Janeiro, Mexico City, and Buenos Aires, use transfer stations. Nevertheless, in these cities, transfer stations only cover about half of the urban collection. In LAC cities, most waste is deposited in open-air dumps, which harm human health and pollute water and soil. Poorly managed landfills are particularly harmful to coastal communities and informal neighborhoods . Moreover, these neighborhoods are often located on hillsides, ravines, or riverbanks vulnerable to landslides and floods.

In urban areas, about three quarters of these deficits are due to some qualitative issues with the housing unit, most often overcrowding (with more than three people per room). In rural and peri urban areas, the most prevalent type of housing deficit is use of inadequate building materials and a lack of basic infrastructure. Households residing in these conditions are highly vulnerable to what have been called the ‘’neglected diseases of neglected populations’’, including vector-borne and soil-transmitted illnesses, such as Chagas, Chikungunya, and trachoma.

There are a number of housing policies that have aimed to improve living conditions for affected households. Among them, are included neighborhood upgrading programs and support for affordable housing acquisition.

Neighborhood upgrading programs focus on providing basic services to improve the well-being of low-income communities, including a range of infrastructure interventions frequently undertaken in conjunction with social interventions, such as the regularization of tenure. Empirical studies on the impact of neighborhood upgrading programs in extremely poor neighborhoods in El Salvador, Mexico, and Uruguay show that they led to a positive effect on the overall housing conditions and general well-being of residents. Similarly, an impact evaluation of the Favela Barrio program in Rio de Janeiro, Brazil, found a positive impact on access to water, sanitation, and garbage collection services.

Public policies are also an effective tool to improve the quality of housing. Housing codes tend to successfully regulate and improve sanitary and climatic standards in new formal housing stock. However, this implies that both existing formal housing stock and informal housing units are not affected by these regulations. Fortunately, recent innovations have lowered the overall cost of code enforcement and data collection. Drones, for example, help collect highly detailed geospatial information from which to infer the quality of the housing stock and thus facilitate targeting efforts to enforce regulations. In Kigali, Rwanda, drones have been used to rapidly map the quality of roofs and toilets in low-income neighborhoods, so to identify housing low quality housing units and prioritize enforcement.

How do the environment and housing services affect the health of its inhabitants?

The environment of a home affects the quality of life and health of its inhabitants. By improving some aspects of residential areas, Important health effects are also achieved. For example, increasing the safety of public spaces leads to higher use, which renders important benefits to population health. There is a strong correlation between access to parks and healthy weight, especially among low-income households.

Studies on housing programs show that improving housing quality decreases the frequency of illnesses in the household, and that female housing ownership improves household health. For instance, improving building quality of the housing unit to reduce dampness and mold contributes to the reduction of respiratory diseases and asthma, particularly in small children. Also, an impact evaluation of Mexico’s Piso Firme program to install cement floors in the housing stock of the fifty Indigenous municipalities with the lowest Human Development Index score, showed that it had significantly reduced the incidence of diarrhea in children five years old and younger.

In addition, there is evidence women’s home ownership improves household health. Studies on housing programs in Ecuador, Ghana, India, and Tanzania found a correlation between an increase in women’s housing ownership and a reduction on intimate partner violence. In addition, a study in Ethiopia found that female housing ownership correlates with shorter periods of illnesses, as women invest more in food and healthcare.

Inclusive Cities: healthy cities for all

In sum, housing impacts individual and public health through multiple mechanisms. Some of them depend on the quality of the housing units, some on its location, and some on the services the housing unit receives. There is a high-level correlation between low income, substandard housing conditions and poor health. Therefore, public health policies should be fully territorial and deeply coordinated with housing ones, all the time the conditions of residence could be both a source of illness and of health for their residents.

The IDB’s Housing and Urban Development Division has published the monograph Inclusive Cities: Healthy Cities for All dedicated to addressing how we can make our cities a much healthier place for their inhabitants. We encourage you to download it to learn how to improve the health of the municipalities of LAC.