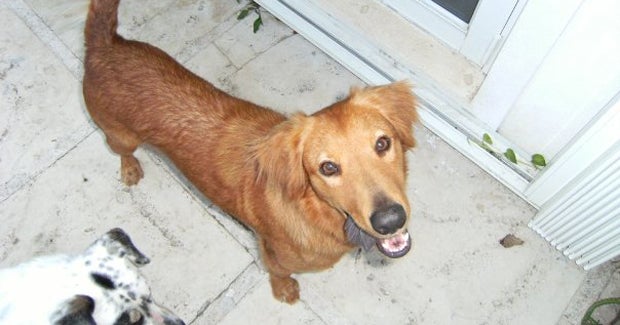 The Potcake has been in The Bahamas for centuries. It has genetically evolved into the resilient champion that it is today. Most parasites and diseases that pedigree dogs would succumb to if they were not vaccinated and not properly cared for would not usually impact the Potcake.

This genetically unique mixed breed dog, makes up the majority of the country’s population of stray dogs. There are approximately 15 thousand strays in New Providence and approximately 15 thousand in the “Family Islands” collectively (Bahamas Humane Society, 2014). These stray Potcakes are considered to be a nuisance to neighbourhoods and communities as they turn over garbage in search of food, carry parasites on their skin that can transfer to domestic pets, have litters of puppies twice a year, and bark relentlessly at night. Domiciled on the streets, the beaches and in the bushes, they sometimes travel in packs and are most vulnerable to motorists. Some become loyal companions to the homeless.

The founders and employees of the country’s first and only Humane Society, plus a minority of Bahamians are among the few who take notice of this native breed. Intermittently, foreign benevolents would sponsor the neutering and caring for of several of these dogs, but these acts are just not enough to curb their plight or promote their unseen value. These dogs are considered throwaways. But are they really?

Over the past few years the country’s crime rate has increased. In 2013 alone, there were 573 armed robberies, 956 drug related arrests, and 133 arsons among other crimes (The Royal Bahamas Police Force).

Potcakes have the ability to do scent detection work for the country if well trained and properly cared for. Scent detection dogs are dogs trained to locate drugs, bombs, guns, and arson among other scents. A good scent dog has more to do with a dog’s drive and the quality of training than its lineage. The average dog has 200 million scent receptors versus humans who have 5 million. Many potcakes could be trained to locate guns and explosives by detecting the odour of certain metals used in making guns and specific substances commonly used in the production of gunpowder and explosive devices.

Arson trained dogs are instructed to detect the chemical traces of accelerants. Dogs can be trained to pick out the specific odours of flammable substances and locate the source. Potcakes could also be trained to carry out drug searches at airports, on planes and on boats as these dogs have the ability to locate even the tiniest trace of a drug. (Forensic Science Central –Detection Dogs, UK).

Similarly, potcakes also have the ability to be trained as diabetic alert dogs. Diabetic alert dogs are trained to react to the scent of chemical changes produced by blood sugar highs and lows in diabetics, especially those with type 1 diabetes (alertservicedogs.com). Seven percent of Bahamians are diabetic. Some diabetics may be interested in having diabetic alert dogs if they knew that there was this option. According to Assistance Dogs International, the characteristics of a good service dog is that it is not protective, is people orientated, is not overly active, is confident but not dominant or submissive, and does not require complex grooming. Potcakes possessing the appropriate traits should be considered for training as service dogs.

The question is why have we not yet considered our genetically superior potcakes for scent detection work with the police force, defense force, fire departments, and customs officers as they are just as capable of being trained and their anatomy will resist the elements of the environment much more than the pedigree dogs?  Why have we not yet considered training our potcakes as service dogs?  Putting our potcakes to good use will not only take strays off the street, it will create a new emerging market of potcakes trained in specialized fields.  It will eventually lessen the dependency the nation has on importing already trained pedigree dogs. It will facilitate the emergence of specialized Bahamian dog trainers and it will curb the culture that Bahamians have towards potcakes, subsequently impacting tourism positively.