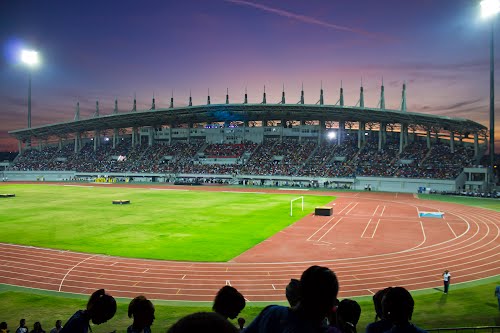 This past weekend (May 24-25, 2014) was truly an exciting two days here in The Bahamas. BAH-MAZING according to a post written by Spikes on spikes.iaaf.org. The Bahamas hosted the IAAF World Relay Championships in our brand new stadium. More than 40 countries including more than 500 athletes participated. You could feel the electricity in the stadium amongst the loud cheers as not only the home country, but the visitors got celebrated by locals and the fans that made the trip alike. Three world records were established, and there is a shared feeling of pride and accomplishment as the event seemed to run its course without any major hiccups. As a business professional and recreational athlete it excites me when major opportunities are presented to prove yourself, and I thrive in the spotlight. The Bahamas has taken advantage of this moment in history and has the potential to benefit immensely from the momentum built from this major event.

The Bahamas has a lot of upside. We are a Caribbean nation that is unique with our archipelago structure that is extremely close to the United States of America which allows for convenient travel. The success of the World Relays hopefully will bring more recognition that a small nation can handle the pressures of global large scale events and successfully execute them. Already in December the country is slated to host a NCAA American football bowl game, and we recently hosted the Miami Heat NBA team last summer in a mini-training camp. Recognition is increasing! I think this would be an opportune time for The Bahamas to continue and strengthen their marketing strategy by also looking at non-traditional sports that are growing in popularity. Trends in the US show that persons are paying to be in more non-traditional races. Clearly Bahamians love their races! According to Running USA’s Non-Traditional Running Events Special Report, in five (5) years the number of estimated finishers in non-traditional events grew from low six figures to four million. An additional sport emerging into the mainstream is CrossFit that is considered “The Sport of Fitness.” Elements of track and field, swimming, weightlifting, gymnastics and functional movements put together and scored by time or points.  In the annual championship held each year that different regions participation has grown globally and has a growth rate of 806% in 2014 from 2011 numbers. The fan base has grown large enough for the likes of ESPN to notice and broadcast on their channels.  Research should also be done on finding an attractive way to include our family islands to increase visibility. Depending on the feasibility, having a televised inter-island expedition might be worthwhile. Let’s ride with this emergence and conquer this niche.

The optimism for these non-traditional events stems from their inclusiveness. There will always be a crowd in big numbers for a professional sports event but when we involve the recreational athletes the number of participants will increase and these individuals will possibly stay in the country longer. Our stadium can only hold 15,000 people, so hosting an Olympic games or Super Bowl style event may not be in the immediate future. Grasping on to the non-traditional sports market can make up for some of that. I think we have an opportunity based on the investment made in hosting the events from last year and this year and the praise from executing them successfully shows that we can do more. Tourism is our leading source of revenue in The Bahamas, and we live and die by our slogan “It’s better in The Bahamas,” so let’s make all sports better here in The Bahamas (minus winter sports of course). It’s clear we are moving in the right direction; let’s just keep that momentum flame burning.