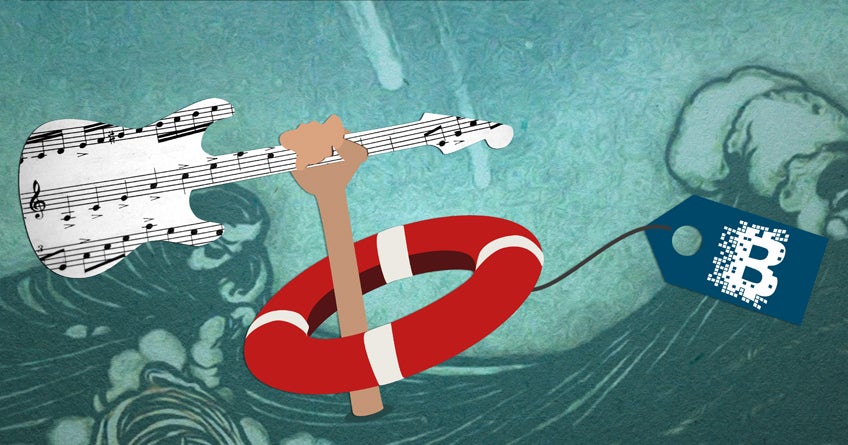 Waking up disoriented in a hotel room in a foreign city was nothing new for Chino McGregregor. He travels all year long with “the movement” – a fan-based wave of today’s Jamaican music. He has followed this wave beyond Jamaica and the Caribbean, to London, Tokyo, Miami, and New York. “Jamaican music is very unique, you need to listen to it live,” says Chino.

Yet one morning Chino woke up in Boston not realizing where he was. Then he recalled being one of three artists from the Caribbean —including his Jamaican friend Shawn Kalieba and Johann Chuckaree from Trinidad and Tobago— that were there through sponsorship from the Inter-American Development Bank (IDB) to be part of the Open Music Initiative‘s (OMI) Summer Lab. The Summer Lab, organized by the Berklee College of Music in partnership IDEO and with sponsorship from the IDB, TiVo, and Context Labs, gathers technology fellows and mentors whose goal is to figure out the future of music from its creation to its experience amongst users, through to its monetization.

“Yo, if a few months ago you had come to me and asked me ‘what was blockchain?’, I would have stared at you and asked ‘are you talking to me?’ Now I only dream of playing that blockchain instrument yo”. Chino is a 34-year-old musician; he performed in front of Jamaican Prime Minister when he was twelve years old and is the son of a Grammy nominee. He was an ideal candidate for the project. Aspirants to the Summer Lab were competitively selected by experts in the OMI and the IDB following a set of criteria including proven musical talent, experience as a professional artist, technological curiosity, and the ability and intent to share what they learned with fellow Caribbean artists.

Shawn Kalieba, another Caribbean participant, is a Jamaican reggae artist and musical engineer. He has witnessed an explosion of talented musicians in recent years on Bob Marley’s home island of Jamaica. In his recording studio, Kalieba has produced works for international artists such as Beenie Man, the world’s “King of Dancehall”, Elephant Man, Ken Boothe, Marcia Griffiths, and Luciano. “Technology could be a blessing or a curse. Thanks to technology today anyone could have a recording studio with little investment and launch his work on a world stage. And that is good because you see talent everywhere. At the same time, you could have your music copied by anyone or played through Spotify or iTunes and never see real money.”

When fans of Jamaican music play one of Chino’s or Kalieba’s hits, Kalieba and Chino should get a check to reflect the consumption of their music. Not so fast. It could take up to two years to get paid, and for them, it would be almost impossible to know if they are fairly compensated. “The processes to register intellectual property tends to be complex and burdensome for artists. In the Caribbean the lack of supportive technologies and monetization training makes the obstacles even more difficult to overcome,” explains Ignacio de Leon, IDB’s Team Leader on a program that seeks to expand the use and adoption of Information and Communications Technologies, ICTs, in the creative industries in the Caribbean. “Besides, everything is changing in music”, says Chino. Jamaica has a world reputation as a creative hub yet how music is consumed has been changing, and the music industry has not been keeping up. “Nowadays artists don’t rely as much on record sales as they do on tours and live performances.”

Here is where the Open Music Initiative (OMI) and blockchain come in.

OMI is a non-profit endeavor founded by Berklee’s Institute for Creative Entrepreneurship (BerkleeICE) in partnership with the MIT Media Lab and a number of other leading academic institutions, music and media industry organizations, creators, technologists, entrepreneurs, and policy experts aimed at “creating an open-source protocol for the uniform identification of music rights holders and creators”, as stated on its mission. The OMI working group developed the supporting technology for building an API (Application Programming Interface). This API will function as a seminal platform, an open source, shared ledger of rights owners and creators that will greatly assist in “simplifying the way music rights owners are identified and compensated, resulting in sustainable business models for artists, entrepreneurs, and music businesses”

“Over this platform, many developers are going to build applications, and many of them based on blockchain,” says Ravi Gupta, an IDB specialist that coauthored with Ignacio de Leon a paper assessing the Impact of Digital Innovation and Blockchain on the Music Industry.

He elaborates: “Blockchain has evolved and today is running openly on millions of devices all over the world. Blockchain technology allows for a kind of programmable template known as smart contracts, a technology that permits for the movement and storage of anything of value securely — in the case of OMI´s API the assets that we are talking about here are music rights.”

One of the beauties of blockchain is that the guarantees for payments and attribution of music rights won’t come necessarily from powerful intermediaries like big music labels or streaming services but rather through a brilliant and robust code that promotes mass collaboration in a sort of massive public ledger as with bitcoin.

“Blockchain has the potential to provide a more quick and seamless experience for anyone involved with creating or interacting with music.” Wrote Imogen Heap a Grammy-winning recording artist and founder of Mycelia. “For example, listening to a song might automatically trigger an agreement for everyone involved in the journey of a song with anyone who wants to interact or do business with it — whether that’s a fan, a digital service provider such as Spotify or iTunes, a radio station, or a film production crew.”

Indeed the Internet and the rise of the digital market has impacted not only musicians in the Caribbean, it is a phenomenon that affects artists all over the world. The 2014 report of the International Federation of Phonographic Industry acknowledged that the global music market has been continuously decreasing. In 2004 it was worth US$33.6 billion. This value nosedived to US$18.4 billion in 2008 and in 2013 fell to US$15 billion. The subsequent increase in the musical revenues that came from online streaming and downloading has been far from offsetting the losses from the decline in sales of CDs and DVDs. By comparison, in 2013 online sales rose to US$5.9 billion, but the 2017 IFPI Global Music Report found the total online revenue went down to US$4.5 billion in 2016.

“Only time will tell whether blockchain will achieve everything it promises: Saving the music industry by transferring control directly from the creators to the users, making the market more transparent, fairer, and free of the intermediaries that feed on other people’s talents without adding value,” says Ignacio de León.

But blockchain or any technology won’t deliver by itself. For the Open Music’s API to succeed, developers need to partner with and think like the artists, the producers that make music possible.

And that was the purpose of McGregor, Kalieba, and Chuckaree participating in OMI’s Summer Lab. The three Caribbean musicians participated alongside 20 students from across the US and the world experimenting with applications built on top of blockchain and using artificial intelligence following a user-centered philosophy branded by IDEO, the world renown design firm that is also a partner in the initiative.

Now they are more aware of the challenges and also opportunities of this new digital world. The IDB has given exceptional importance to the digital economy and the creative industries. And for a good reason: the creative economy has outperformed most other sectors in the world and it might grow exponentially in the next decade. According to a study by the World Intellectual Property Organization, copyright industries contribute over 5% to the Caribbean economy and generate a similar proportion of jobs. In the Caribbean, music is dominant in the cultural sector, which makes the OMI and its technological promises even more relevant.

Roger Santodomingo is a writer, journalist, film and television producer with vast international experience. He is a consultant for the IDB and at George Washington University he is dedicated to exploring new technologies and their applications to communication and democracy.

Read the blog in Spanish

Listen to more podcasts in our Improving Lives in the Caribbean series here.