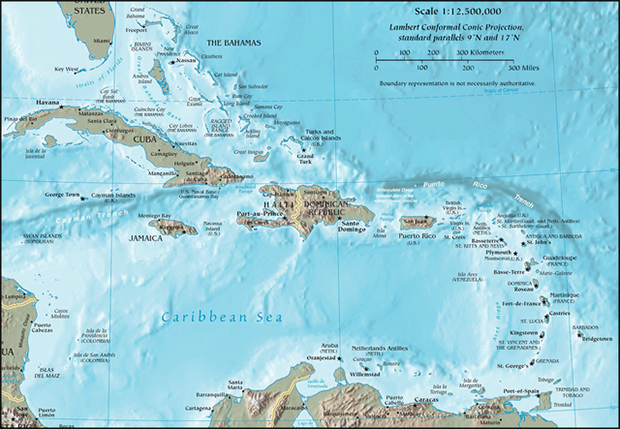 Ironically, while thoroughly entertaining myself elbow-deep in Guyanese pepper-pot, I received a work request over the weekend to address the issue of Caribbean identity. I also became aware of a heated on-going debate on our blog as to how we should define and boundary the concept of “the Caribbean” – past colonial affiliations; imaginary lines in the deep blue sea; economic and trading blocks; shared post-colonial democratic experiences of African, Asian, and European descendants in small, mostly island states etc.

First, let’s helicopter up to 5,000 feet. Regional identity definitions are always going to be problematic if you are looking for anything more substantive than who is in my geographical neighborhood. Our socio-historic needs for nationalistic separatism and intra-regional comparison tend to play key roles in blocking our view of regional inclusion. Don’t believe me?  Try asking our neighbors to the south and west what “Latin American” really means. Similar colonial affiliations to the Spanish Kingdom you say? Tell that to Brazil, Suriname, Belize, Guyana and French Guiana – not to mention the existing indigenous nations who do not abide by immigrant territory demarcations. The same challenges arise with other regional affiliations around the world, including Europe. So with that we can jedi mind-trick ourselves into the understanding that our lack of consensus does not make us disorganized, ill-educated or otherwise less-than inhabitants in other parts of the world.

Notwithstanding our new appreciation of our own discord, let’s take a more grounded look by way of a definition that I find to be useful and appropriate on Wikipedia:

For geographical reasons, I particularly appreciate the distinction between the more focused delimitation of the Caribbean and the broader view of the West Indies. For purposes of the English-speaking islands, when we start to take account of historical and economic considerations, it allows us to understand how the West Indies and the Caribbean have become interchangeable.

Remember the West Indies Federation? Established in 1958, the Federation comprised ten nations: Antigua and Barbuda, Barbados, Dominica, Grenada, Jamaica, Montserrat, the then St Kitts-Nevis-Anguilla, Saint Lucia, St Vincent and Trinidad and Tobago. Although it only lasted for five years, it was one of the preliminary formations of British pan-Caribbean identity and shared visioning – the three campus University of the West Indies (UWI) being its most notable legacy.

Fast-forward through the wave of Caribbean independence and Treaties of Chaguaramas to the modern-day Caribbean Community (CARICOM), you will find a wider grouping of countries with a shared understanding of how similar historical, political and economic contexts play a role in the development of a regional identity.

Does this mean that CARICOM has an all-encompassing formula that captures every peculiarity of each member state while establishing a common thread through all Caribbean/West Indian states? Well, of course not. However, what’s important about its membership, and those in multilateral development institutions, is that it establishes agency of citizens in the region to define the most appropriate affiliation and regional identity as they see fit.

As an economic development practitioner, there’s nothing more comfortingly clear than that.

[1] The Bahamas is only a member of CARICOM but is not part of the Caribbean Common Market.