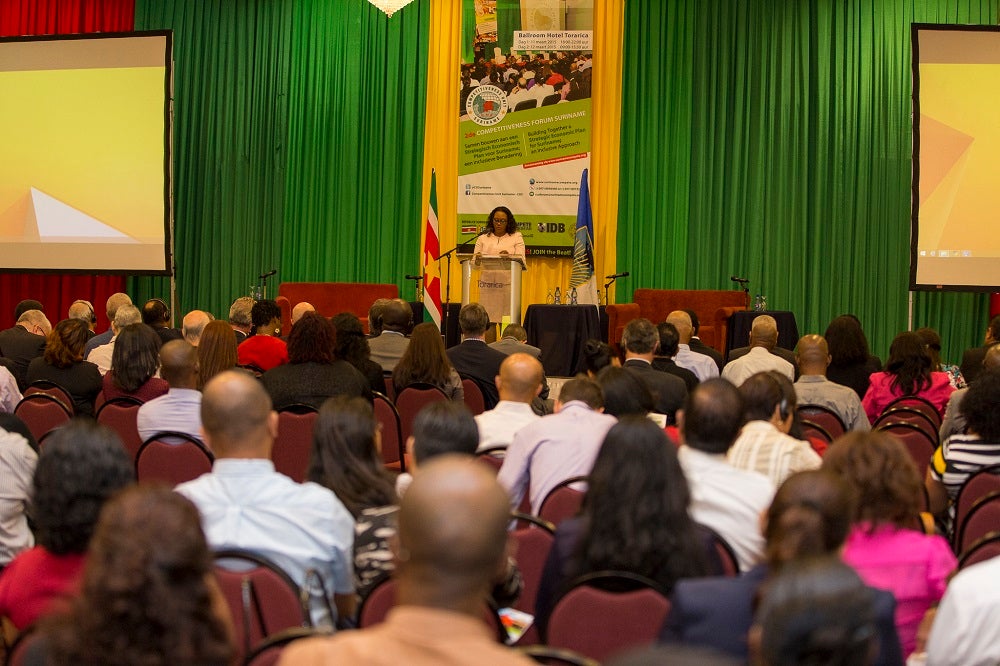 by Nicola Karcher and Sasha Baxter

On March 11th-12th the Competitiveness Unit of Suriname (CUS) held the 2nd Competitiveness Forum, “Building Together a Strategic Economic Plan for Suriname” organized by CUS with collaboration from Compete Caribbean, the IDB Country Office in Suriname and other regional stakeholders.  Discussions for the two day forum related broadly to the following topics: private sector development policies, business climate, innovation, productivity and competitiveness.

The opening address by Mr. Ameerali, former Vice President of the Republic of Suriname and Her Excellency Minister Burleson, former CUS Executive Director, set the tone for the discussions held at the forum. The key representatives of the private and public sectors, the civil society, academia, other decision makers and political representatives attended.

The forum highlighted the achievements made to date by the CUS, with improved legislation and modernization of institutions aimed at improving the business climate at the top of its priorities. Based on experiences from similar countries such as Jamaica, Singapore and Mauritius; speakers at the forum highlighted the opportunities available for growth in Suriname.  One speaker noted that while focus has been on diversification, the country should also embrace its resource rich sectors which drive growth. Suriname has a unique culture as it is the only Dutch speaking country in South America, with close historical ties to Europe, while being culturally similar to its CARICOM neighbors. However, as one of the speakers explained, cultural and social norms often precipitate complex decision making processes in Suriname which conflict with general business expectations. He further emphasized that Suriname is very capable of producing studies, strategies and implementing action plans; but the relationship between the strategy and business culture needs to be strengthened.  A successfully executed strategy and growing private sector will advance in a culture that dares to take risks, make mistakes and ask questions: ideally in a culture that has open and frank dialogue.

The speakers from the international community applauded Suriname’s efforts at enhancing their business climate environment given the country’s unique situation. Mr. Cox, from Jamaica, offered much comfort that Suriname is not alone in its struggle for improved business climate and that the steps in the right direction had already been taken.  Under the umbrella of the legislative reforms, dialogue and collaboration between the public and the private sector is fundamental for growth, diversification and competitiveness. The forum served to ratify the conviction that the time to act is now. Envisioning Suriname with a renewed paradigm is key for the development and growth of the private sector.