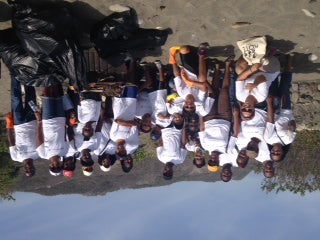 Members of the IDB Team pose next to bags of trash picked up at Wickie Wackie beach in St. Thomas, Jamaica.

Each year in September, thousands of volunteers comb lakes, rivers, and beaches around the world for all kinds of waste. These volunteers are the driving force behind the International Coastal Cleanup (ICC) Day, a hallmark initiative of the Ocean Conservancy (OC), which is a nonprofit environmental advocacy group based in Washington, D.C., United States.

Last year, 561,000 volunteers picked up more than 16 million pounds of trash from the coastlines and waterways around the world. Over 8,000 of those volunteers were Jamaicans who removed over 85,000 pounds of trash from our beaches under the national coordination of the Jamaica Environment Trust (JET). These dedicated volunteers also collect data about sources and types of trash harming our oceans and waterways. The data is used to raise awareness, inspire recycling efforts and shape policy decisions from the local to international level.

What did we do and how we did it?

IDB’s Corporate Responsibility Program (CSP) with support from the Caribbean Country Department (CCB) Organizational Climate Champions Committee and in partnership with the Kingston Optimist Club organized the participation of over 50 volunteers of all ages. The meeting point was the emblematic beach “Wickie Wackie” located in Bulls Bay, St. Thomas, in close vicinity to Kingston.

The day started bright and early at 7:00 a.m. Volunteers were transported to the beach site and were divided by groups of 4 to 5 members each. Each group had a group leader, trash collectors, bag holders and a data recorder. They were also provided with gloves, garbage bags and data cards.

Have you ever attempted to pick up a stranger’s trash from a beach and record what type is it or try to figure out how it ended up there?

Our volunteers can tell you. They were required to record how many cigarette butts, Styrofoam food containers, plastic bottles, food wrappers, bottle caps, glass beverage bottles, cups & plates, forks & spoons, grocery bags and other plastics were found. Not to mention other strange stuff you might encounter such as car parts, paint brushes or even a stove!

Three proud IDB volunteers dug up from the sand what looked like a stove! Meanwhile the rest of the team is seen here sorting & recording a pile of litter.

Therese Turner Jones, Country Representative in Jamaica successfully led one of the groups and recorded data.

What did we learn?

Marine litter is found globally in all seas around the world. It often stays buoyant and can travel long distances with ocean currents and winds. In 1997, the U.S. Academy of Sciences estimated that 6.4 million tons of marine litter is deposited in the oceans and seas each year. Eight million items of marine litter are dumped every day and five million of them from ships. According to environmental groups such as the Ocean Conservancy, the amount of plastic pieces found on Caribbean shores has at least tripled in the last ten years. This indicates that a tenfold increase in the next decade is not unreasonable.

In the Ocean Conservancy’s 2014 International Coastal Cleanup (ICC), Jamaica is ranked among the top 12 participating countries. The collected debris was tabulated as follows:

What can we do?

Here are some simple ways of taking action:

Next year in September we will come again. Jamaica needs more than one day to clean up its coastline but with the support of organizations such the Ocean Conservancy, the Jamaica Environment Trust and the IDB, along with corporate partners and thousands of volunteers we hope to raise awareness of the Caribbean’s coastal waste crisis.