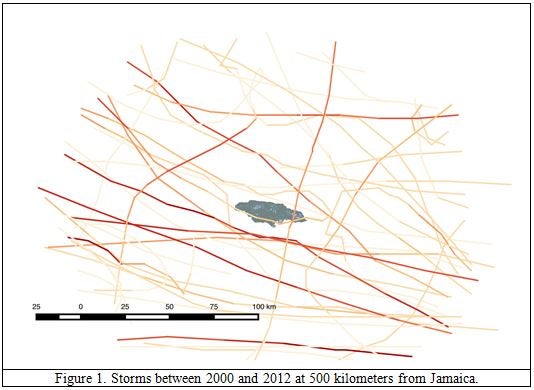 In the Caribbean, it is interesting to use the Geographic Information System (GIS) to explore and analyze unexploited data of the social sector. Using GIS data from the National Oceanographic and Atmospheric Administration on tropical storms and integrating it with household surveys leads us to answer questions related to the welfare effects of tropical storms. Upscaling the amount and richness of the information that a household survey contains with geographical characteristics could help to drive research on the effects of climate change variables such as tropical storms.  This would help better advise public policy on, for example, adaptation to climate variation.

To answer some of the potential questions for Jamaica, new data was created using household information from the census, the Survey of Living Conditions and the Tropical Cyclone Tracks data set (BestTrack (HURDAT2)-NOAA). One striking detail of household surveys in the Caribbean is the lack of information regarding the level of destruction resulting from disasters such as a tropical storm.  In other parts of the globe, such as in Vietnam, although surveys ask about monetary losses caused by typhoons, this information is not accurate because its gathering process relies on the individual’s recall of the event (Zylberberg, 2010).  These cases use actual event information that commonly comes from GIS.  In this way Boose et.al, 2004 formulated a way to accurately build destruction indexes that accurately describe the losses resulting from storms in Puerto Rico.  Furthermore, Strobl, 2012 used this method to investigate the effects of tropical storms on economic growth in the Caribbean region.

Indexes that use the physical characteristics of Jamaican storms present an important advance in understanding the effects of tropical storms on households. The idea is to exploit exogenous variation in the intensity and trajectory of storms at least 500 kilometers from the island, as seen in Figure 1, to test causality.  The figure shows the trajectories of tropical storms between the years 2000 and 2012 where the wind speed was defined by the degree of red going from the 150 kilometers per hour for Hurricane Dean in 2007 to 30 kilometers per hour for Tropical Storm Helene in 2000.

The trajectories and wind speed in addition to the Jamaica Census’ GIS information (provided by the Statistics Institute of Jamaica) on districts let us build the destruction index for each one of the 5,235 districts.  Figure 2 uses census information to show the risk map of Hurricane Gustav by district.

This richness in data will open the research agenda to questions regarding climate change.  Many institutions have stated that warm ocean waters, as a consequence of global warming, will yield stronger but not more frequent storms so that using our knowledge to understand the effects of past storms will help to adapt to the changes in the future.

A considerable amount of information is yet unexplored.  The integration of household data, farmer’s production data, infrastructure data, and so forth with GIS and satellite information will disentangle causality issues to questions such as, “Is there any effect of tropical storms on early childhood physical development outcomes?”, and “Does labor informality trend changes due to natural catastrophes like tropical storms?”  The CCB-Caribbean Economics Team pursues such questions in its ongoing research agenda.

Other applications of this tool include the following: