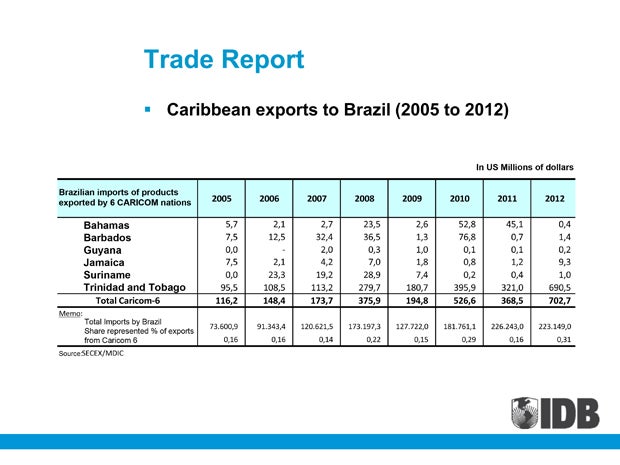 Competition in tourism is strong and success depends on strong brands and the availability of good connection, resulting in tourism countries focusing on specific markets from where they try to attract as many visitors as possible and hinders diversification. The same is true for the Bahamas, Barbados, Jamaica and Trinidad and Tobago, which have strong links with the US, Canada and the UK but are relatively unknown in the rest of the world, where Caribbean means Punta Cana and Cancun. This focus on a few mature economies brings disadvantages, not least because tourism arrivals closely mirror the economic conditions in these few countries, a hard lesson learned in the world economic downturn.

The IDB is actively supporting the Caribbean governments to diversify their markets, starting with Brazil, which has a huge travelling population. However, establishing a brand and bringing tourists requires investments. Having a direct connection is a huge advantage for potential visitors but airlines are reluctant to start a new connection without guarantees that seats will be filled. In addition, attracting tourists requires specific and substantial marketing expenses. CCB did some simple simulations to determine the costs and benefits of such an initiative and found that there is a thin line between a major chance for the Caribbean and the risk of incurring fiscal liabilities. The fiscal benefits depend on country-specific tax regimes, which includes arrival and consumption taxes and the cost of the guarantee.

All governments would benefit in terms of fiscal revenues if they are able to attract enough visitors to have 65 percent or higher flight seat capacity utilization. In addition, we estimate that the net increase in GDP (increase excluding cost) would be between 5-10 times the cost to the government. The initiative seems beneficial if they can attract enough visitors. In addition, the fiscal effects will depend on whether the government can agree on a guarantee scheme that shares the risks and the benefits and if marketing can be direct and cost-effective. Additional benefits can be included, for instance using the direct airlift for freight. Other ways to get Brazilians, and more generally South American visitors, to the Caribbean, should also be considered for instance by establishing a hub in one of the Caribbean islands.