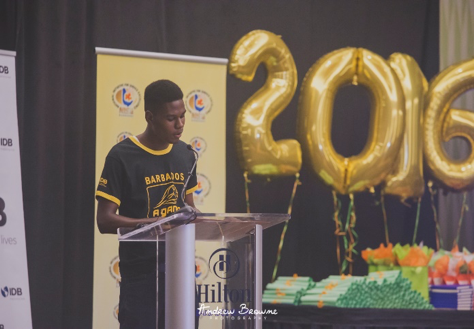 The A Ganar 2016 graduation was the biggest event thus far for the A Ganar program in its three-plus years of existence in Barbados. Hosted at the Hilton Barbados, over 350 persons including the Minister of Education, the Honorable Ronald Jones, representatives from the Inter- American Development Bank, Partners of the Americas, and other institutions, along with the facilitators, parents and friends gathered to celebrate the Class of 2016, the biggest one yet!

In the 2015/2016 Year 3 Cohort of the A Ganar program, 490 students started the program and approximately 65% successfully completed the phases of – employability skills, technical training and on the job training –  of the program. This is over 300 students completing the Class of 2016.

The students from the current Office Procedures class at the Barbados Vocational Training Board and some alumni students worked diligently to welcome and sign in over 150 graduates and their guests. Guests mingled and were serenaded by the Steel Pan Band of the Daryll Jordan Secondary School during the cocktail reception, which preceded the graduation ceremony. On display was the talented work from the students of the Barbados Government Industrial School, whose phase 2 efforts in garment making were exhibited; this ranged from hats, bags to dresses and swimwear.

The ceremony which began at 6:00 pm was opened with the viral sensation ‘mannequin challenge’ which requires persons to strike a pose like a mannequin while the theme song “Black Beatles” plays in the background. With most of the graduates and their guests gathered inside the ballroom, ‘on the count of three’ uttered the words of Country Facilitator Ms. Wiggins and everyone took a pose while the music played and the film crew captured the epic stillness of a crowd of more than 250 persons at the time.

Throughout the ceremony speeches were made by Anna Barrett (Program Officer – Partners of the Americas), Mrs. Sabine Rieble-Aubourg (Education Lead Specialist – IDB), the Honorable Ronald Jones (Minister of Education), Ytannia Wiggins (Country Coordinator – A Ganar Barbados) and Master of Ceremonies, Mr. Junior Burgess. However, the graduates gave a warm reception to their peer Damari Hall who made the participant remarks with great confidence and poise.

The commemorative broken trident made its way to the ceremony and was mounted in front of the masses as we not only celebrated the success of our youth but the ‘Golden Jubilee’ 50th anniversary of Barbados.

Finally, it was time for the memorable walk across the stage for many. A terrifying moment for some of the youth but a touching one for their parents and facilitators to watch. Yes, our numbers were by far the largest; however, the nine-month journey for the youth wasn’t an easy road. In one particular situation, it was quite a walk for Daran Taylor, a student of the Princess Margaret Secondary School; Daran chose Barbering as his technical training area and turned out to be one of the top students in his class and during his internship. However, the journey to the stage was a long and doubtful one for him. Daran was shot in the head and was on life support, many including the doctors were skeptical that he would make it. They said if he did pull through he probably wouldn’t walk or talk again. God had other plans in mind for Daran though, after spending nearly three months in the hospital, undergoing various brain surgeries, Daran was able to recover and take that walk across that stage on his own two feet to collect his certificate to the smiles and delight of his parents and peers.

The journey to success is never easy, there are obstacles and setbacks that try to deter us, but with belief, persistence, and determination, anything is possible. These youth all displayed those characteristics throughout their 9-month stint and were able to successfully complete the A Ganar program and celebrate their achievements.

Congratulations to the Class of 2016. We wish them all the best in the future!