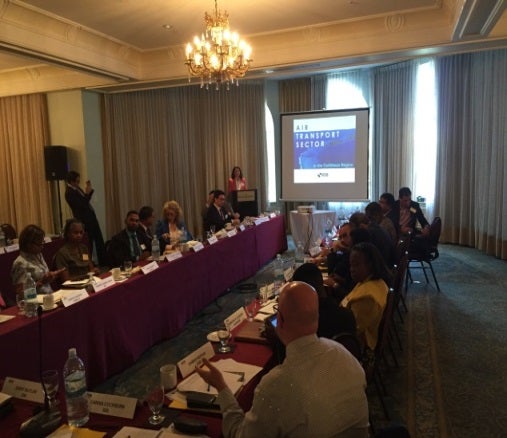 Participants of the IDB Think-Tank on the regional air transport agenda.

An Open skies debate erupted at a Bank sponsored think-tank which brought together aviation leaders from across the Caribbean to brainstorm on the air transport needs to enable deeper regional integration and to inform the Bank’s air transport agenda.

The deliberations were anchored on a Bank study and on the idea of making the Caribbean region an open market for airlines, with references made to the success of this arrangement as implemented in the European Union and other Politico-Economic regions. The central counter argument was the unacceptable risk of putting airlift for tourism – the life blood of the region – into the hands of an offshore airline.

One view is that we consider open skies in the context of complementary innovations which reimagine the Caribbean as one space in a way that unlocks opportunities for regional airlines. The region receives 22 million stayover arrivals annually, which, empirically, is an adequate volume to profitably support intra-regional air service if we drive this demand through regional marketing in lieu of individual island marketing. It would require the following three innovations to consolidate the intra-regional traffic:

Of course I am aware that things are not as simple to achieve as they are to put on paper but if we are serious shouldn’t we at least try?