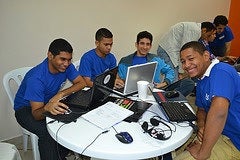 Discussions about open data and open government are advancing rapidly in the Caribbean and we are already witnessing some good examples of the benefits of open data in the region.

In this post, I would like to briefly review progress being made of the creation of an Open Data ecosystem in the Caribbean and look at a few examples that have been useful to some of the governments in this region.

Just two Caribbean countries — the Dominican Republic and Trinidad & Tobago- have taken measures to join the Open Government Partnership (OGP), an intergovernmental organization that brings together 63 countries in the pursuit of openness and accountability.  Membership of the OGP is a good signal that national governments have understood the need to adopt more open frameworks.

However, while the region’s participation in OGP remains low, the Caribbean has demonstrated strong institutionalized commitment to freedom of information (FOI). As of 2011, of the 16 countries which are members of the Caribbean Community (CARICOM), 7 had enacted FOI laws, 4 had drafted FOI legislation, and 2 had guaranteed FOI as a constitutional right.

2 Strengthens the civil society and the regional integration

The dynamism of civil society is one of the positive and most remarkable aspects of open data. In the last three years, we have seen several regional initiatives led by civil society actors that have that are worth mentioning.

Since 2011, the Caribbean Open Institute, a coalition of organizations supporting open approaches to addressing development issues in the region, has organized the Developing the Caribbean Open Data Conference and Code Sprint (DevCa).

DevCA is an annual regional event on open data and technology for development, held simultaneously across many different Caribbean islands. It combines a two day conference highlighting global best practice in open data and the progress made regionally, with a 24 hour code sprint in which technologists and non-techies from across the region work on responses to regional problems, using Caribbean data.

Building on the momentum and broader outreach of DevCA, the Code For the Caribbean initiative was created by the SlashRoots Foundation to facilitate deeper engagement with government agencies around the challenges of the delivery of priority citizen-facing services. In its first pilot, the Code for the Caribbean programme worked with the Rural Agricultural Development Agency (RADA) to explore creative solutions that leveraged technology to combat the theft of agricultural produce or livestock, one of the leading problems plaguing the Jamaican agricultural industry.

It is in areas such as agriculture and fisheries, education and data journalism, where most progress has been made.

One of the most notable cases is HarvestAPI, an open data platform for sharing and publishing data from the agricultural sector, which can be accessed by both government and the public. HarvestAPI was created to remove the obstacles that prevented relevant agriculture stakeholders, such as the police, RADA extension officers, and the Jamaica Agricultural Society from coordinating efforts and accessing one another’s data in order to improve data-driven decision making. HarvestAPI made RADA the first government agency in the region to publish agricultural information such as price and production data.

In addition to engagement with government agencies, the region has also seen an increased uptake by open data intermediaries such as the media. Last year, Panos, a regional organization that helps journalists to cover sustainable development issues, organized a data journalism fellowship to build regional capability in data-driven journalism. Fifteen journalists from across the region received training and support in how to analyze information for stories in thematic areas.

Complementing such cross-institutional civil-society led collaborations as DevCa and Code for the Caribbean, the World Bank has also begun high level policy dialogue with a number of Caribbean governments to support the implementation of Open Government and Open Data initiatives. St Lucia and Antigua and Barbuda have each completed an Open Data Readiness Assessment. This is an instrument which helps governments to define action-oriented plans for developing Open Data initiatives. In the case of Antigua, the government has also set up an Open Data Readiness Unit to lead the implementation.

While there is still much work to be done, momentum is building in the region around openness as a means of addressing the problems that are most relevant to the region. While the Caribbean may not as yet feature prominently in high level engagements like the Open Government Partnership, it is quietly developing its own model for adopting open government principles.

Matthew McNaughton is the Executive Director of the SlashRoots Foundation, a civic tech nonprofit that leverages technology to create solutions to social problems endemic to the Caribbean region, while supporting the development of the regional tech ecosystem. His work focuses on the role of data and information in improving public sector service delivery.