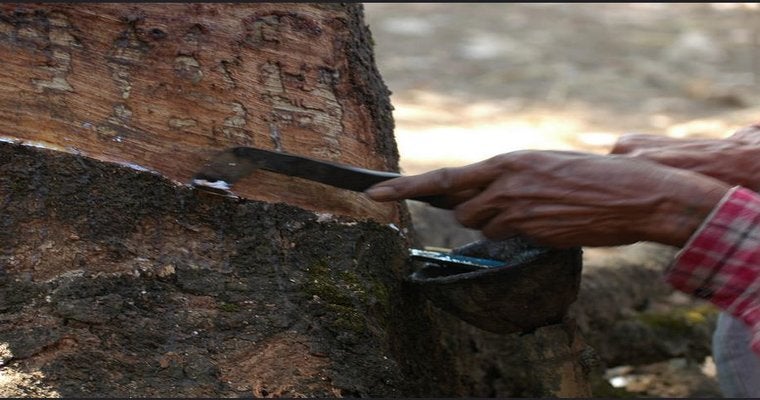 In the state of Acre, a remote corner of the western Brazilian Amazon, lies the staple of the rubbertappers’ livelihoods, latex. This milky fluid is released when the rubber tree is cut and hardens once it’s exposed to the air.

Latex has been a vital source of income for vulnerable forest communities for decades. However, up until the late 1990s, the combination of unclear land rights, lack of effective governance, few economic opportunities, market failures, and poor infrastructure kept the rubbertappers of Acre (locally known as seringueiros) in a vicious cycle of chronic poverty and low return on their economic activities.

The opportunity to turn this situation around came in 1999 when Acre’s policy makers launched a bold economic development strategy focused on the sustainable use of natural resources through improvements in the agriculture , while also curbing deforestation: “The Green Economy”.

As a result of this initiative, in 2004,the state of Acre set up NATEX[1]– the first and only condom factory in the world that uses 100% natural latex to make preservatives. The latex is extracted sustainably from the Chico Mendes reserve, situated in the municipality of Xapuri. With a production capacity of one million condoms annually, the factory is one of the centerpieces of the state’s push for a green economy. NATEX uses the latest technologies and stringent quality controls (such as the ISO 9001[2] certification) to ensure its condoms meet international standards.

This new green economy means that nowadays, instead of selling low value coagulated latex balls as raw material for manufacturing of rubber products at prices between 25 and 75 cents a liter, NATEX pays almost tenfold prices (between $2.50 and $3.00 per liter) for its ‘white gold’, as latex is increasingly being known as in Acre. The seringueiros are now part of a forest extraction value chain that is significantly improving the quality of life of forest dwellers in the 970,570 hectares Chico Mendes Extractive Reserve. The Brazilian Ministry of Health buys all of its production for free distribution during anti-AIDS and STDs public health campaigns.

Through a loan to the state of Acre approved in 2013 (Acre Sustainable Development Program/PDSA – BR-L1289), the IDB is supporting the rubbertapper communities in the Chico Mendes Extractive Reserve to promote low carbon development activities such as better access to finance in order to improve the quantity and quality of their latex, investment in reforestation of degraded areas by planting rubber trees, diversifying their economic base by developing multi-crop agroforestry systems, providing infrastructure for access, storage and basic processing of their produce.

The safeguards unit of the Bank has recently conducted a supervision mission to the Chico Mendes Reserve and was able to see first-hand some of the Bank’s investments. We also talked to some of the beneficiaries – amongst those Mr. Raimundo Mendes de Barros (aka ‘Raimundão’), a rubbertapper community elder and cousin to the legendary Chico Mendes- a leader during the land conflicts of the 1980s that claimed his life.

During the mission the ESG project team evaluated the functioning of the Program’s safeguards management tools such as the participatory governance structure (Program Steering Committee) and the program’s Environmental and Social Management Framework (ESMF). We also explored opportunities to better include neighboring indigenous communities in the Call For Proposals in order to support to community-led  projects as part of the Program’s forest value chains.By ensuring that rubbertappers can make a living without resulting to deforestation, these sustainably manufactured condoms not only help family planning and prevent diseases but also help improve local economies and preserve essential rainforest habitat. With all those benefits, these condoms are also set to heighten the pleasure for everyone!

[1] NATEX is an acronym for NAtural laTEX