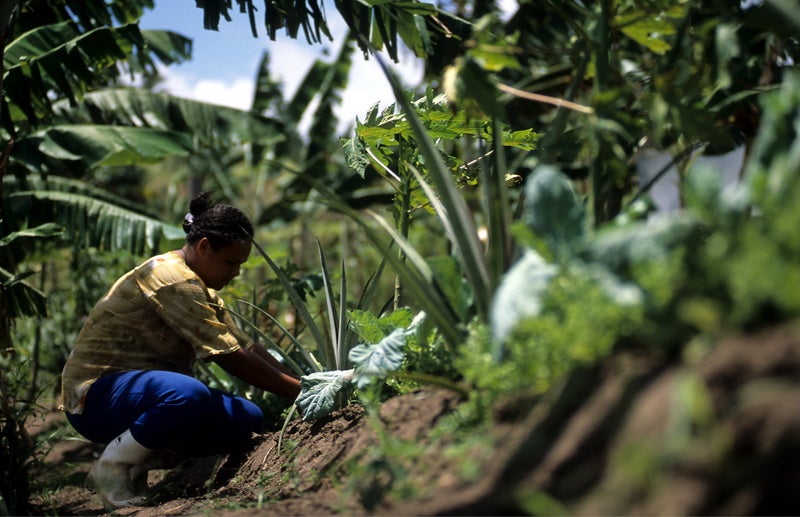 How do you feed a mega-city encrusted in the middle of the Amazon forest without resorting to deforestation? The inescapable answer is agriculture. But the challenge doesn’t end there. The capital city of the Amazonas state, Manaus, finds itself isolated from the major agricultural producing centers of Brazil. As a result, it must rely heavily on smallholder, rural producers located in the periphery of the city as well as scattered throughout the interior of the state for its supply of affordable food, fibers, essential oils, latex, medicinal products, and more.

The IDB is currently working with the state of Amazonas development finance agency (AFEAM), in partnership with the state’s agroforestry development institute (IDAM) and other agencies in strengthening agricultural productive value chains through provision of targeted rural credit to the interior of Amazonas. The program will apply the Bank’s suite of environmental and social safeguards, which include technical assistance to farmers in low impact, environmentally friendly agriculture techniques, full adoption of registries, and an inter-institutional forum at the state level to promote the adoption of new technologies, support the development of emerging productive rural chains and improve overall agricultural productivity.

Achieving these safeguards was no simple task. Unlike Amazonas, rural Amazonia has undergone profound changes in the last 20 years. Its traditional frontier development model has focused on the construction of large infrastructure projects as well as capital- and land-intensive commodity driven exports. While these investments have generated much needed revenue for the country, they have not resulted in opportunities for long term local employment or wealth creation, secured land rights or even enhanced food security.

Conversely, the opening of new frontiers along the eastern and southern edges of the forest has caused massive deforestation and forest degradation. This gave rise to rural exodus and uncontrolled or unplanned sprawl. This has created some of the most problematic urban slums in Brazil[1] as many farmers leave agricultural production areas and try to find better paying jobs in the city, exacerbating food insecurity in a paradoxically resource-rich region.

But all is not lost. The state of Amazonas has a unique chance to avoid repeating this inequitable, boom-and-bust type development model. The state has an area of 1.6 million Km2, of which 50% is formally protected forest and only some 2.4% have been deforested to date. Amazonas’ historically low levels of deforestation are related to its relative inaccessibility (poor or absent road connections) that has prevented access to the forest by large-scale farming and cattle ranching, coupled with fiscal incentives to attract employment-intensive industries to Manaus (the Manaus Industrial Pole and its Free Trade Zone, known as ZFM).

The game changer has come in the form of the Rural Environmental Cadaster (CAR: Cadastro Ambiental Rural[2]), a digital land registry system for all rural properties that Brazil has recently made mandatory.

In the CAR, each property is mapped and registered through an Internet-accessible register that includes details of its location (GPS coordinates and satellite picture), major landscape features such as area under production or cleared, and areas that according the federal Brazilian Forest Code are considered intangible or ‘legal forest set-asides’ (which for Amazonas is 80% of the property’s total area). The personal details of occupants, owners or users are also included, including reference to any existing land title or deed.

Key features of the CAR that are attracting an increasing numbers of farmers to join are:

The CAR brings with it some of the key building blocks of long-term land tenure security and environmental compliance in the interior of Amazonas. And these in turn are essential to promoting responsible public and private investment in sustainable agricultural production and forest management.

Amazonas is poised to chart a new path to development by leveraging the potential for farmers to make an economically attractive living from sustainably produced goods in the interior. By doing so, the state ensures its cities benefit from increased food security and the provision of other ecological services from the forest. This green-economy approach is Amazonas’ best chance for a green future.

Figure: Example of a digital mapping produced by the CAR for a rural property register, depicting intangible (e.g. streams), productive as well as forest set-aside areas. (Legend in Portuguese)

[2] Official site: www.car.gov.br. For further information and an independent assessment of progress of implementation of the CAR: http://www.inovacar.org.br/