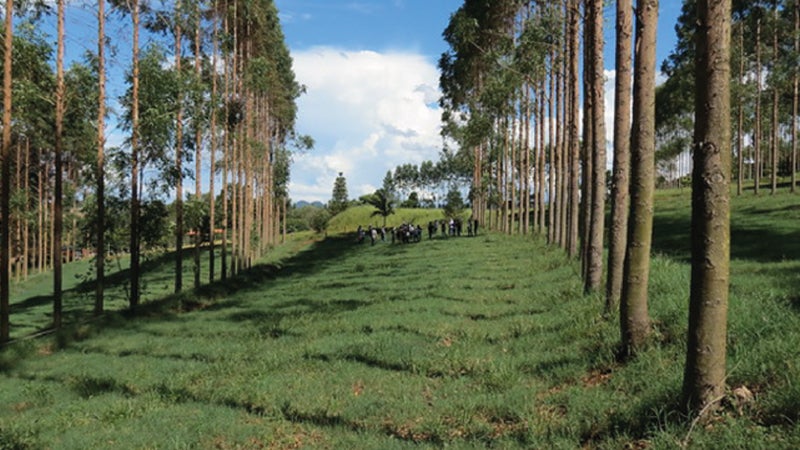 Brazil is home to 13% of the world’s forested area.

But in recent years the country has seen a huge increase in deforestation due to land use change and agriculture.

While the largest proportions of greenhouse gas emissions in other countries comes from the energy and transport sector, in Brazil deforestation is a huge emitter.

There are over 100,000 animal species and 40,000 plant species among the country’s six terrestrial biomes.

The Amazon, for example, represents over half of the planet’s remaining rainforests containing 90-140 billion metric tons of carbon, while the Atlantic Forest is home to 20,000 species of plants and 52% of its tree species are endemic – they are found nowhere else in the world.

Amid Brazil’s exceptional ecological wealth, agribusiness is the country’s strongest sector, making up a quarter of GDP; soybeans, beef, and sugar are among its main exports.

But farmers in many parts of Brazil are burning down forests to clear the way for cattle ranching and monocultures of crops – causing climate change, depleting natural resources, and threatening biodiversity.

In recent years, however, Brazil has developed strategies to ensure the sustainability of its farming and forestry.

For almost a decade, until 2012, Brazil had managed to slash its deforestation rate by 83%, a success achieved in part due to government enforcement actions and public policies, such as deforestation satellite monitoring programs by INPE (National Space Research Agency) and the Low Carbon Agriculture Plan (Plano ABC).

In 2019, the year president Jair Bolsonaro took office, deforestation in the Amazon Rainforest increased by 85%, to its highest rate in more than a decade.

The Rural Sustentável project, which recently concluded its first phrase, is financed by the UK Government in partnership with the Brazilian Ministry of Agriculture. The project, which is implemented by the IDB, looks at ways to promote a change in the behaviour of farmers, aligning agricultural productivity and improved income of farmers with the conservation of natural resources and reducing deforestation.

It supports the Brazilian Government’s Low-Carbon Agriculture Plan, which aims at promoting the adoption, by small and medium-sized farmers who are most vulnerable to climate change, of “climate-smart” technologies in their production practices.

So far, Rural Sustentável has focused on two regions of Brazil; the Amazon and the Atlantic Forest. The collaborative project demonstrates practices that farmers may be unaware of, to encourage sustainable livelihoods for them and their surrounding environment.

The aim of the project is to scale up practices that promote economically viable sustainable management of rural properties.

We are working to avoid further deforestation by showing farmers that sustainable practices are easy to adopt, can be economically feasible, and have long term social and environmental benefits, serving as alternative livelihoods and avoiding the need for further clearing of land.

The technologies involve promoting farmers to adopt integrated crop-livestock-forest systems, agroforestry systems, recovery of degraded lands, and sustainable management of extractive forest-based products, where less trees are cut down and cattle can co-exist and graze amongst crops and forest.

They are complemented by various management strategies to best encourage farmers to implement and share their practices among their respective communities.

Firstly, the project provides learning opportunities for farmers by using Demonstrative Units – areas where the technologies are already deployed. Members attend field days where they can learn first-hand about the agricultural methods, as well as see the benefits and potential challenges of the practices.

Secondly, farmers are offered financial incentives to encourage the proper implementation of one or more of the technologies on their land, ensure necessary initial liquidity to curb economic concerns, and facilitate acquisition of inputs.

Finally, the project assigns members of a given community to act as local technical assistants where they are trained up to provide continued support on property management and implementation of the practices themselves, monitor how farmers are doing and provide continued technical assistance, which has proven to be the most essential element in ensuring long-term and effective adoption of the practices. 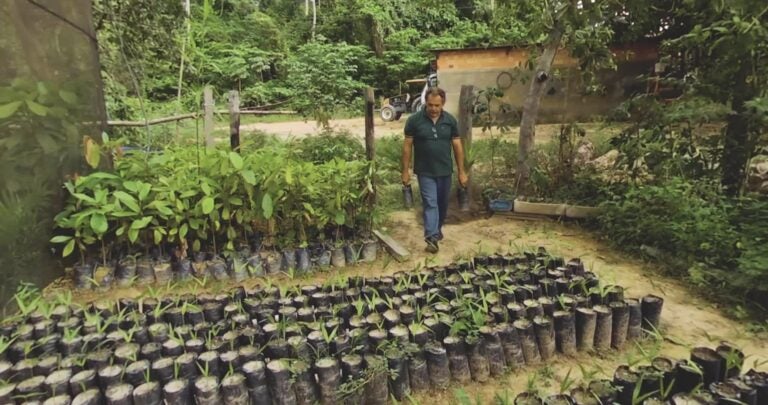 Although it will take between 3 and 7 years to see the results of physical changes in emission reduction, the project is already measuring social results in terms of changes of behaviour, increased productivity, and income.

To date, it has directly benefited over 18,000 farmers and avoided the deforestation of 8,550 hectares. A recent survey involving more than 3,400 producers who were part of the project, has shown that 99% had increased incomes and 99.4% intended to continue or increase their sustainable practices.

One farmer, who lives in the Atlantic Forest state of Bahia spoke of his improved livelihood telling us, “I balanced my debts and fixed up my farm. I now have a solar greenhouse, the quality of my cacao has improved, and I still have time to tend to the garden with my wife.”

The success of Rural Sustentável has been recognized globally, including at Cop25 last December in Madrid, where we showcased the project via a virtual reality experience following multiple requests from international institutions to learn more about the project.

During the Cop over 1,000 people tried the VR experience including senior policy makers and other delegates alike. They got a unique taste of the biomes and people benefiting from the project.

Overall, the project has proved that sustainable practices in the region have benefits.

“Rural Sustentável has shown me how it is possible for us producers to meet, unite and combine our ideas,” said Crenilda Castorino, a rural producer and resident of Mato Grosso, a state in the Amazon. “It’s possible to realise our dreams, and we have tried to show a lot of other producers how much it is possible to improve their lives too.”

The success of the project has promoted the implementation of its second phase which will concentrate on two further biomes: the Cerrado – a massive tropical savanna; and Caatinga, a dry forest region.

Brazil has the potential to be both a biodiversity and agricultural powerhouse without sacrificing the climate or the environment. Rural Sustentável shows one possible way to achieve this, at scale and low-cost.

Photo: A field day at a Demonstration Unit of the Integrated Livestock-Forestry System (Rural Sustentável)