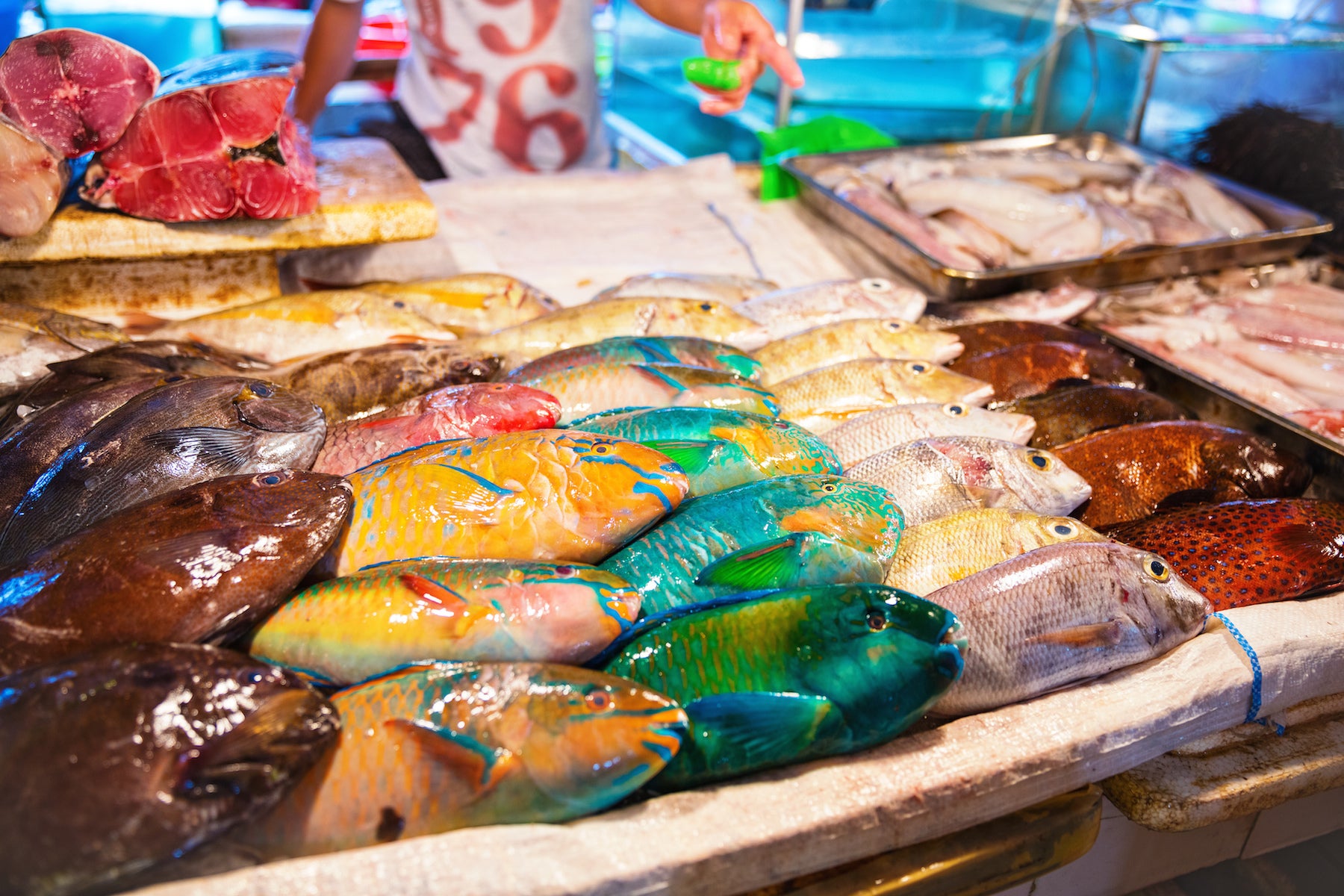 On my last visit I was very fortunate to have meetings on both sides of the weekend allowing me to spend my off days in a familiar place with familiar people. My friends and I decided to take advantage of this rare opportunity and headed east to Hellshire, a popular Jamaican hang out spot along the coast known for its fresh fish and other seafood done to order. To my great surprise, or rather disappointment, my friends all requested “parrotfish”, without remorse.

To many consumers, parrotfish is a saccharine delight, which in Jamaica is usually prepared whole and either fried, steamed or brown stewed. To ichthyologists, parrotfish are colorful and insatiable herbivores that spend around 90% of their day eating algae off of coral reefs. To the conservation community, parrotfish are sand machines, turning the coral they eat into … you guessed it: sand!

What I found was that my friends, who form part of the consumer group described above, did not intend to infuriate the conservation community. They simply did not understand the impact of their “delights” on the environment and the importance of preserving this species. This blog is about what I tried to convey in my discussion with them.

1. The first one was already mentioned. Parrotfish “discharge” up to 100 kg of white sand a year for every year of their lives. Larger parrotfish are like sand factories, producing upwards of a ton of sand per year. The University of Exeter found that parrotfish produced more than 85% of the new sand-grade sediment on the reefs in the Maldives. When we consider the impact over thousands of years, imagine the amount of beautiful white sand parrotfish can produce if they were allowed to live and not consumed. This is very important in countering beach erosion.

2. Parrotfish are also essential to the survival of coral as they act as ‘natural cleaners’ of parasites that grow on it. Without the help of the parrotfish the coral would simply die. According to a 2012 study, the loss of parrotfish disturbs the delicate balance of coral ecosystems and allows algae, on which they feed, to smother the reefs. The study also found that Caribbean corals have declined by more than 50 per cent since the 1970s and may disappear in the next 20 years as a direct result of the loss of parrotfish and sea urchins — the area’s two main grazers — and not primarily as a result of climate change, as is widely believed. The study further shows that some of the healthiest Caribbean coral reefs are those in areas where governments “have restricted or banned fishing practices that harm parrotfish, such as fish traps and spearfishing”. These include the Flower Garden Banks National Marine Sanctuary in the northern Gulf of Mexico, Bermuda and Bonaire. In Belize, a voluntary ban on the fishing of parrotfish became national law when the government passed a new set of regulations (Fisheries Regulations 2009) to protect overfished species.

3. Last but not least, let us consider the economy. A 2015 study noted that the direct contribution of travel and tourism to GDP in Jamaica was JMD128.3bn (8.1% of total GDP) in 2014, and was forecast to rise by 4.7% in 2015, and to rise by 4.6% pa, from 2015-2025, to JMD211.2bn (11.6% of total GDP) in 2025. Another study describes the importance of coral reefs to the people and economy of Jamaica. It shows what some of us may not know: Coral reefs help to build and protect Jamaica’s beautiful white sand beaches, which attract tourists from around the world. Reefs provide critical habitat for Jamaica’s artisanal and industrial fisheries, and also protect Jamaica’s coastline — including coastal communities and tourist hotels — from the destructive force of tropical storms. In other words, eating parrotfish has a direct impact on the economy. Tourists travel to Jamaica for much more than reggae music and delirious, irie ‘rastas’; the diaspora takes care of that! They travel for the sand and the sea. Tourism depends on the beaches, and the beaches depend on the coral, all made possible by this voracious species. By consuming parrotfish we rob the beaches of their sand, and in turn harm the economy.

Caribbean reefs generate more than US$3 billion annually from tourism, fisheries and shoreline protection. For years, there have been discussions on taking strong action for ocean conservation, not just for saving parrotfish, but also for establishing marine reserves. While it has been proven that restrictions and other bans on parrotfish capture have helped protect the environment, we cannot just patiently wait for the laws to change. When our habitat is affected, we are affected, and when the economy faces challenges, the effects will certainly be upon us and future generations. In Belize, it was local fishermen who first voluntarily recommended a ban on fishing parrotfish after it was made clear to them how important these fish were to the health of the reef and therefore to their livelihoods.

My friends – after a better understanding of the issue – also took voluntary action and vowed never to have parrotfish again. I hope that you too decide to forego parrotfish in the future. Changing consumer patterns is key. Red snapper is a delicious stand-in for parrotfish, but ensuring the sustainability of almost any reef fishery is complex. An even better option, lion fish! In fact, the Government of Jamaica is encouraging development of a market for this tasty invasive.