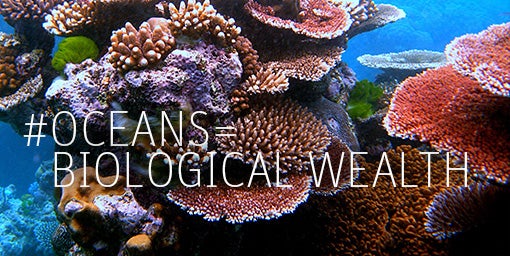 On June 8, we celebrate World Oceans Day. Here are seven economic and environmental reasons you too should celebrate and think about conserving the oceans and coral reefs in our region:

More than three-quarters of the surface of the earth are covered by oceans. They are home to an immense biological wealth: about 200,000 species identified, although it is estimated that there are millions of species yet to be classified.

50% the world’s oxygen is produced by phytoplankton, microscopic algae in the oceans, which are also the basis of the marine food chain.

Just think about it: to date 12 astronauts have walked on the moon. However, only three people have seen the Mariana Trench, at over 11,000 feet deep is the deepest point on planet earth.

40% of the world’s oceans are affected by human activities and climate change, pollution, depletion of fisheries resources and the loss of coastal habitats. According to UN data, overfishing in recent decades has led to the collapse of 13% of global fisheries.

The Mesoamerican Reef, which stretches along more than 1,000km from Mexico Yucatan to Honduras , is the second largest barrier reef in the world. Reefs are a major tourist attraction and a rich source of biodiversity, since they are home to approximately 25% of all marine fish species in the world. However, it is estimated that about 20% of the world’s coral reefs have been destroyed in recent decades and that an additional 20% is already severely degraded.

Video: View the story of Godfrey Louis, a fisherman who realized the importance of preserving this ecosystem and is dedicated to restoring coral in Placencia, Belize, to ensure their survival and that of their community.