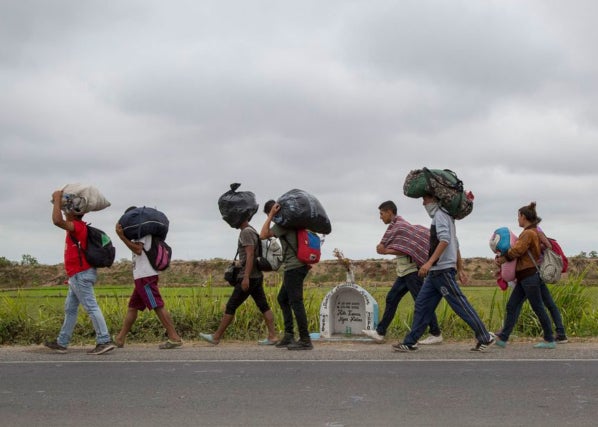 In an unprecedented development in the history of Peru, over 200,000 people returned to their native cities in the countryside from cities such as Lima, Arequipa or Cusco, as result of the economic situation produced by the mandatory confinement to contain the spread of COVID-19. The quarantine decreed by the government between March and June 2020 had an almost immediate impact on the population’s income. In particular, informal workers were more affected by job loss, which hindered them from meeting their basic needs.

In a study financed by the IDB, the consulting firm GRADE surveyed over 3,000 returnees located in the areas of greatest migration, also known as hotspots, to estimate the size and dynamics of return flows to rural areas and carry out a diagnosis of the situation of migrants in their localities, the possible effects of their arrival on the pressure on natural resources, and the opportunities for sustainable development, taking into account the new human capital that has migrated to these areas.

What is the profile of the returnees?

Respondents show a young (30.4 years on average) and educated profile, there are more men (55%) than women (45%) and they are mostly mestizo. Their native language is Spanish (74%), Quechua (22%) and Aymara (2%). 63% returned alone, while the rest did so accompanied by their relatives. 73% completed high school and 35% attended higher education.

Where are the returnees?

The study estimates that between 218,019 and 278,593 returnees relocated during the pandemic in 2020. The Lima region was the main exit point since 105,000 people left this region to return to their areas of origin. The main destinations were the Cajamarca and Ancash regions, followed by Junín, Piura, and Huánuco.

Another aspect is the dynamics of intraregional migration, that is, relocations within the same region. The regions with the highest return migration of this type include Cusco, Puno and La Libertad. In these regions, many individuals left the urban areas they had migrated to and returned and settled in their rural areas of origin located in the same region. The following graph shows the migratory dynamics of returnees from rural areas in Peru:

Returnees (thousands) to Peru’s rural areas during the COVID-19 pandemic
Source: Projections from: Analysis for Development Group (GRADE, by its Spanish acronym) March 2021

Opportunities and challenges for a sustainable recovery

The respondents’ profile reveals opportunities and challenges to achieve a sustainable recovery in host areas. For example, having a higher educational level than that of the local population —about 75% of adult returnees between 26-50 years old have completed high school— results in greater possibilities of taking advantage of their skills and generating more added value. Another opportunity is the entrepreneurial spirit among returnees, since 9 out of 10 are interested in starting their own venture. However, the challenge is that the vast majority lack the resources to finance it.

Another challenge identified is the high rate of informality that tends to occur among migrants. For example, 38% of returnees work in agriculture and three-quarters work independently, which offers a picture of the state of informality in which they operate.

How to promote economic dynamization in the places of destination?

The study proposes a series of specific measures to promote the economic dynamization of the territory, and thus take advantage of the greater presence of young and relatively educated people in the area.

In districts with low environmental risk, but high socioeconomic and demographic pressure due to the increase in the returning population, the proposal is to accelerate public interventions aimed at boosting agricultural activity, including from technical assistance and credit promotion to investments in technology transfer and irrigation, according to the specific needs and potential of each territory.

In territories with a large influx of returnees that have high environmental risks such as agricultural overexploitation, deforestation and coca cultivation, the proposal is to concentrate efforts on four types of interventions:

In addition, there is a proposal to identify the urban centers closest to the return zones with a potentially greater dynamism to foster planned and formal housing construction activities, promoting new urban centers linked to rural areas, developing health, education, and potable water services. In these new urban nodes, the promotion of new businesses and activities to add value to natural resources is recommended.

These measures could contribute to overcoming the social and economic crisis generated by the pandemic, while creating new jobs, protecting nature, and strengthening the climate resilience of the communities receiving the returnees. The scope of this study could guide the country’s strategies to achieve a sustainable, inclusive, and resilient recovery.

These results will be collected in a technical note that the IDB will publish in the coming months.

Martha Denisse Pierola is a development economist specialized on trade and migration, currently working for the Equitable Growth, Finance and Institutions (EFI) Practice Group of the World Bank. She has published several papers on export development and co-created the World Bank's Exporter Dynamics Database–the first-ever global database on exporter growth and dynamics, based on firm-level export data. She has also studied the impact of import competition and migration shocks on labor outcomes and productivity in Latin America. Before rejoining the World Bank, she worked as a Senior Economist for the Migration Unit of the Inter-American Development Bank where she conducted research on migrants’ profiles and the impact of cash transfers on migrants’ socioeconomic integration. Previously, she also worked as an economist for the World Bank, the Peruvian Government (INDECOPI) and also consulted for the private sector and other international organizations. She has a PhD in International Economics from the Graduate Institute of International Studies in Geneva, Switzerland and a Master of International Law and Economics from the World Trade Institute in Bern, Switzerland.

Ana Iju works in the Climate Change and Sustainability Division at the IDB Country Office in Peru. She has more than 12 years of experience in climate change, particularly in adaptation issues. Before the IDB, she worked in the Ministry of the Environment of Peru, coordinating the project to adapt to the impacts of glacial retreat in the Tropical Andes and in the Second National Communication on Climate Change. Previously, she worked on the implementation of environmental and quality management systems with international standards in public and private companies. Ana is a Food Industry Engineer from National Agrarian University - La Molina in Peru and has a Master's degree in Environmental Sciences from Wageningen University in the Netherlands. Follow Ana on Twitter: @ana_iju