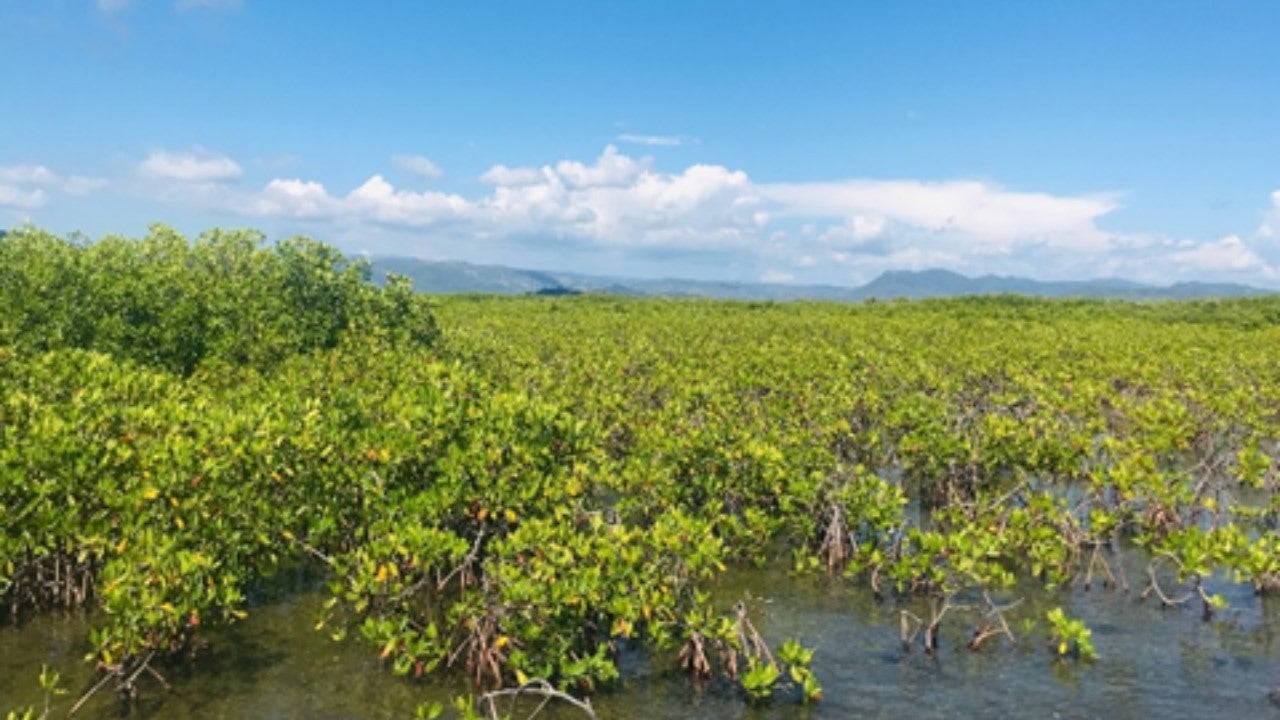 Jane and Arturo enjoyed a tasty lobster and a pina colada while soaking their feet in the turquoise waters of Hispaniola Island, relaxing after a sightseeing trip where they spotted migratory birds and dived alongside manatees within green and thick mangroves. Little did they know that, throughout its life, that lobster had passed several phases of its growth in these amphibious forests resistant to salinity, which grow in estuaries and shallow waters.

The 483 km2 of mangroves on the island (225 km2 in Haiti and 258 km2 in the Dominican Republic) are fundamental for the reproduction of the spiny lobster (Panulirus argus), and they are also one of the most important shelters for coastal-marine biodiversity of the island, since they host hundreds of species of domestic and migratory birds, reptiles, fish, molluscs, crustaceans and mammals.

The majority of the 85,000 fishermen on the island (75,000 in Haiti and another 10,000 in the Dominican Republic) take all or part of their catch from species that depend on these humid forests. The manatee lives in shallow waters like the mangroves, and many of the thousands of tourists who visit Hispaniola dream of swimming with them, as can be done in Bayahibe or in the Santuario de Mamíferos Marinos de Estero Hondo. Without being a specialized activity as diving, mangroves are accessible to tourists of all ages.

Mangroves protect coastal areas and towns against tsunamis, winds and extreme waves, as their roots and branches dispel the energy of these elements. In Haiti, in October 2016, the mangroves (in green on the map) protected a large part of the town of Aquin against the 3 to 4-meter waves produced by Hurricane Matthew.

The mangroves are mostly made up by the woody species of Rhizophorae mangle (red mangrove), Avicennia germinans (black mangrove), Laguncularia racemosa (white mangrove) and Conocarpus erectus (button mangrove), and therefore are an important uptake source of carbon dioxide. In 2016, a methodology was developed in Haiti to measure this carbon fixation potential through the use of satellite images, stereoscopy, field data and statistical models, proving mangroves in the protected area of ​​Les Anglais / Aquin can capture about 9,2-27.5 Teq CO2/ha/year.

Even in Haiti, the mangrove is a link between the island and its history, since some red mangrove trees were installed between the tip of the Company and the Military Fort “Les Oliviers” on the peninsula of Saint Louis du Sud, built by the French in 1751 in full fight against the English for the control of the maritime routes of the Caribbean.

The mangrove is a link between sea and land, between nature and the human being, the mangrove feeds us, protects us, and cleans air and water for us.

Mangroves can represent an effective, efficient and sustainable alternative for green infrastructure, also innovative financing methods can be explored for their preservation and sustainable management (climate bonds, insurance with private and public capital such as for the coral reefs of Cancún, etc.). But time press forward, and the threats are increasing: urban and tourist development, coal mining, wastewater, solid waste, among others.

For a long time, mangroves have been considered unhealthy places and therefore mistreated, destroyed and neglected. The Caribbean is home to about 12% of the mangroves on the planet (22,000 km2) (Spalding et al., 2010). Let’s think of the importance of this ecosystem and the numerous ecosystem services it provides.

By chance, the publication of this blog coincided with the announcement of the new report of the Ramsar Convention on Wetlands that warns about the accelerated disappearing of wetlands in the world. According to this report, these ecosystems are decreasing at a rate three times greater than that of forests, with serious consequences for our future.

Let’s rise with our roots in the water to preserve these important ecosystems for humanity.

Géraud is a natural resources management and protected areas specialist with 9 years of experience in developing and implementing strategies to improve environmental performance and governance in developing countries, particularly in Small Islands Developing States. He started his career as an environmental consultant working mainly on environmental and climate governance in the Indian Ocean Region with regional, national and local authorities. Before joining the Inter-American Development Bank (IADB), he worked for the German Cooperation (GIZ) as an environmental advisor to the Ministry of Environment of Haiti in order to support the development and management of the National Protected Areas system. He is currently working as a Natural Resources Management specialist for the Environment, Rural Development and Disaster Risk Management Division of the IADB in Haiti and the Dominican Republic where he designs and manages operations that focus on integrating natural capital into productive sectors such as fisheries, agriculture and tourism.