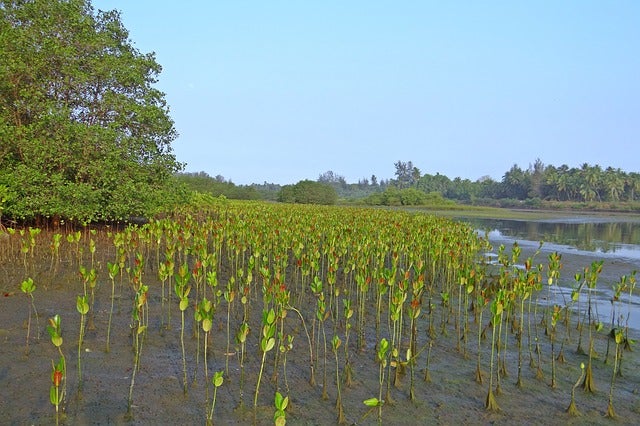 Spanning over three decades, the Inter-American Development Bank (IDB) has been at the forefront of policy development and public-sector investments fostering blue economic development and risk-resilient coastal zones in the Wider Caribbean Region. Using the Integrated Coastal Zone Management (ICZM) framework, and more recently incorporating ecosystem-based considerations, the Bank has been able to refine its technical approach over time. Testament to this, the Bank was recently awarded a project merit award for Climate Change Resilient Infrastructure by the Environmental Business Journal International for its Shoreline Management Plan (SMP) for Corozal, Belize. The Bank’s SMP development strategy defines a sustainable approach and a relevant methodology for replication throughout the Region.

Coastal natural capital – services and natural resources of the coastal zone- are embedded in national GDP (IDB 2016). Corals, sea grasses and mangroves provide raw materials for industries, wave and wind buffering, habitat and carbon sequestration among their many economic benefits. For instance, the annual value of services that coral reefs provide to the Caribbean is averaged at USD$312 Million for fisheries, USD$2.1 Billion for dive tourism and USD$2.2 Billion for shoreline protection (Simpson 2010).

In Belize, many settlements and blue economic sectors, particularly tourism, are located within the coastal zone and rely on stable coastal natural capital to create enabling conditions for their sustainability. However, its coastal zone is highly vulnerable to hurricanes which have historically affected the country every three years costing average annual losses of USD $5 Million, approximately 0.5% of GDP (World Bank 2010). The Government of Belize (GOB) has long recognized this as, amongst its important initiatives, it: (i) established the Coastal Zone Management Authority and Institute (CZMAI) in 1998; (ii) earmarked sustainable tourism as critical to its Growth and Sustainable Development Strategy (GSDS, 2016); and (iii) legislated the Belize Integrated Coastal Zone Management (ICZM) Plan in 2016.

At the request of the GOB, in 2016 the Bank commissioned the study ‘Improving Disaster and Climate Resilience in Sustainable Tourism’ in Corozal District, Belize, given its tourism potential and high levels of coastal risk. Working in collaboration with the CZMAI and the Ministry of Tourism and Civil Aviation, the Study delivered an SMP aimed at reducing climate-risk and boosting the tourism sector’s contribution to national GDP.

The first step of SMP development was to comprehensively understand the baseline human and natural conditions of Corozal’s coastal zone. The Bank worked with Jacobs International Inc. to apply innovative methods to gather relevant data including the: (i) deployment of Acoustic Doppler Current Profilers to gather wave, tide and current data; (ii) use of drones to conduct condition assessments and mapping of built structures and coastal natural capital; and (iii) examination of satellite imagery to develop land use, water quality, marine and terrestrial habitats, bathymetry and topography data sets (Figure 1). Datasets were compiled in SANDS, a proprietary geodatabase with coastal-specific applications.

The second step involved modelling of erosion and flood risk within Corozal’s coastal zone. Data gathered in the previous step and the most likely IPCC climate change scenario for Belize were used to simulate the current and future impacts of natural hazards on the coastal zone. The Mike 21 modelling software and Jacob’s flood modeler were used for simulations.

The third step focused on developing the integrated, climate-risk-resilient SMP for Corozal. SMP’s typically involve the policies of Protection, Adaptation, Control or Prevention. To tailor these policies to Corozal’s sustainable development needs and climate risk vulnerabilities, model results and a range of data sets- in particular land use, habitats, morphology and hazard exposures- were considered.  Guidelines of Belize’s national ICZM plan and feedback from a series of local stakeholder meetings were also vital inputs.

Analysis resulted in sections of shoreline sharing analogous risk and socio-environmental conditions being assigned specific SMP policies, referred to as “Policy Units”. The frontage of Corozal Bay was divided into 17 Policy Units (Figure 2) reflective of the spatially differing coastal development goals and climate risk management needs. A mix of governance, policy and infrastructure recommendations were proposed to implement SMP recommendations.

Based on the SMP, four sites were selected for protection due to their high tourism growth potential that was being undermined by a high exposure to climate-risk. Designs conceptualized for these sites were nature-based proposing the reintroduction of mangroves as the naturally occurring habitat, reversing years of mangrove clearance. Designs built in favorable conditions to encourage mangrove establishment and resilience to climate-risks through (i) selection of endemic mangrove species; (ii) embedding of rock structures to plant mangrove propagules and deflect wave energy; and (iii) defining a stable geometry (Figure 3).

Aside from the well documented efficacy of mangroves for providing coastal protection equivalent to those provided by traditional hard-engineered infrastructure, an ex-ante economic analysis showed that recommendations will:

In so doing, the Corozal SMP evolves from hard-engineering focused coastal management approaches typical to the region, which, if used as a best-practice guideline, has enormous potential to directly address blue economic development and environmental management needs for coastal based economies in Latin America and the Caribbean.

Image by Bishnu Sarangi from Pixabay