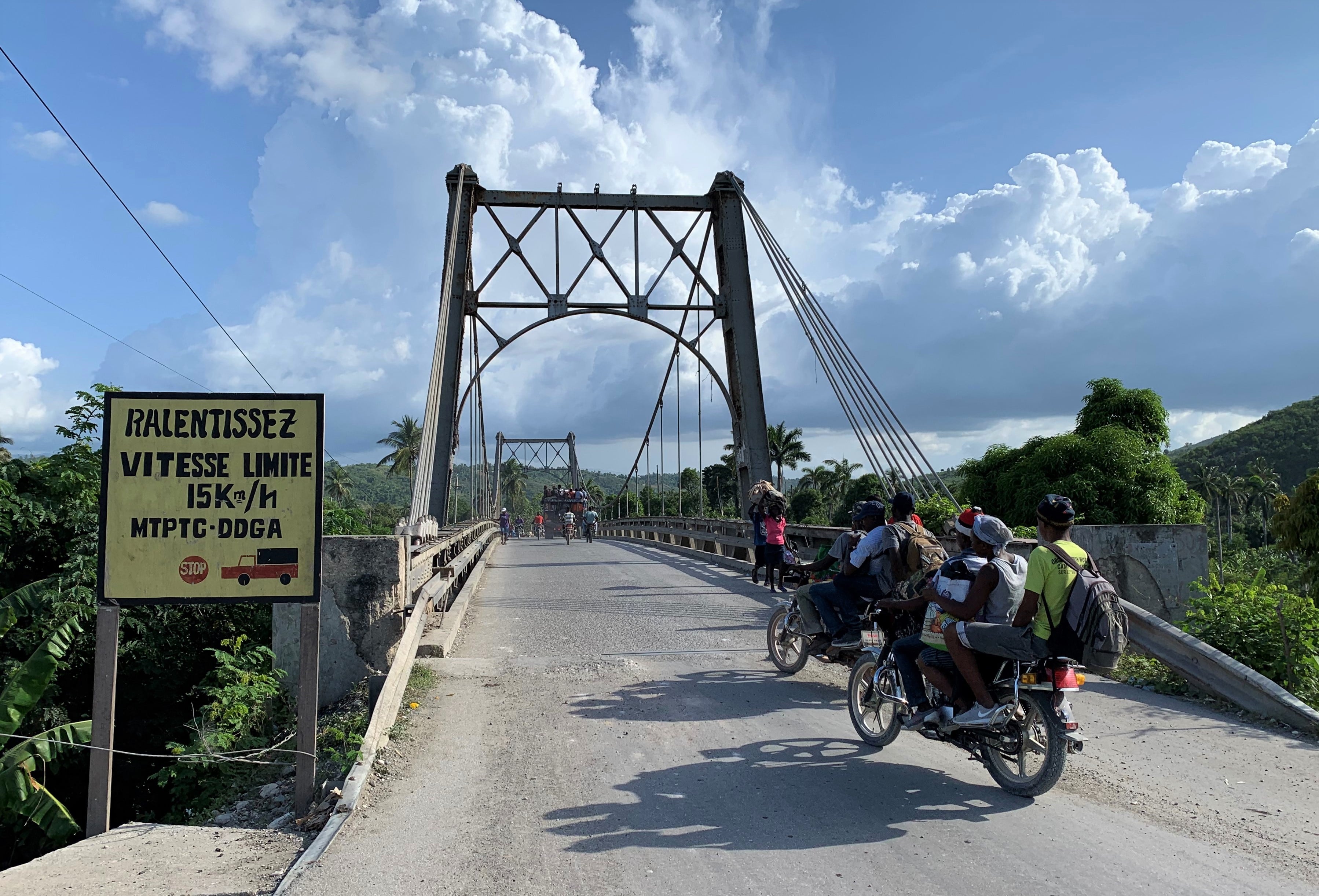 Haiti is one of the countries with the highest risk index for natural disasters in the world and one of the highest indicators of lack of resilience in Latin America and the Caribbean. Year after year, the hurricane season arrives between June and November, generating extreme weather events including rain, strong winds, fast and slow floods, and landslides.

Considering only hydrometeorological threat events (tropical cyclones, storms, tornadoes, snow storms, snowfalls, avalanches, storm surges and floods) between 1994 and 2013, Haiti was ranked as the third country with the greatest impact in terms of loss of life and economic damage.

For example, there were 4 hurricanes (Fay, Gustav, Hanna and Ike) in 2008 in the span of one month. This resulted not only in the loss of human lives, wounded and affected, but also the collapse of the national transport network, causing the disconnection of different regions of the country and the inability to transport goods and food. Total losses were estimated at US (14.6% of GDP)

Given this situation and considering that, according to the IPCC, climate change can generate greater and more frequent precipitation events that can cause flooding in some areas of the planet, the Haitian government requested the support of the Inter-American Development Bank (IDB) together with the European Investment Bank (EIB) for the construction and / or reinforcement of new and existing road infrastructure (roads and bridges), in which resilience to the risk of natural and climatic disasters must be guaranteed. 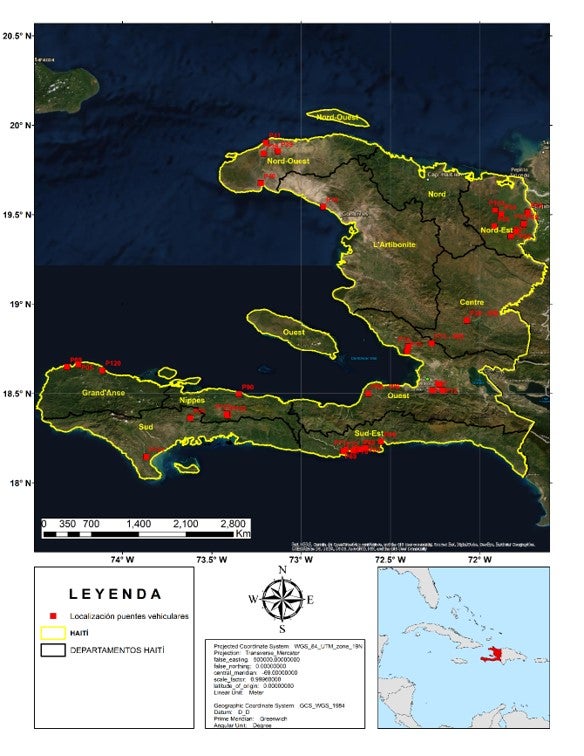 The construction / reinforcement program included 33 bridges located in 8 of the 10 departments of the country. Due to the hydrometeorological threats to which the country is exposed, it is considered that the program should include designs resilient to the effects of climate change for floods.

In response, the IDB initiated coordination with the Transportation Division (INE / TSP), the Climate Change division (CSD / CCS) and the Water and Sanitation division (INE / WSA) to:

The technical cooperation program runs in sequence and each of the stages provides vital information for the next. The effect of climate change is considered in the hydrological analysis stage for the generation of crescent hydrographs, under two analysis scenarios: i) from historical precipitation conditions between 1950 and 2005 and, ii) from precipitation conditions with climate change between 2006 and 2100, making use of scaled data from general circulation models (GCM) of CMIP5.

Considering two hydrological analysis scenarios (historical and future) allows the comparison of flows that can occur in the 33 bridges. Therefore, for each basin it is possible to select the most critical hydrological condition in order to generate resilient geometric and structural designs in the event of flood events.

The hydrological model used is precipitation-runoff and includes the following components: 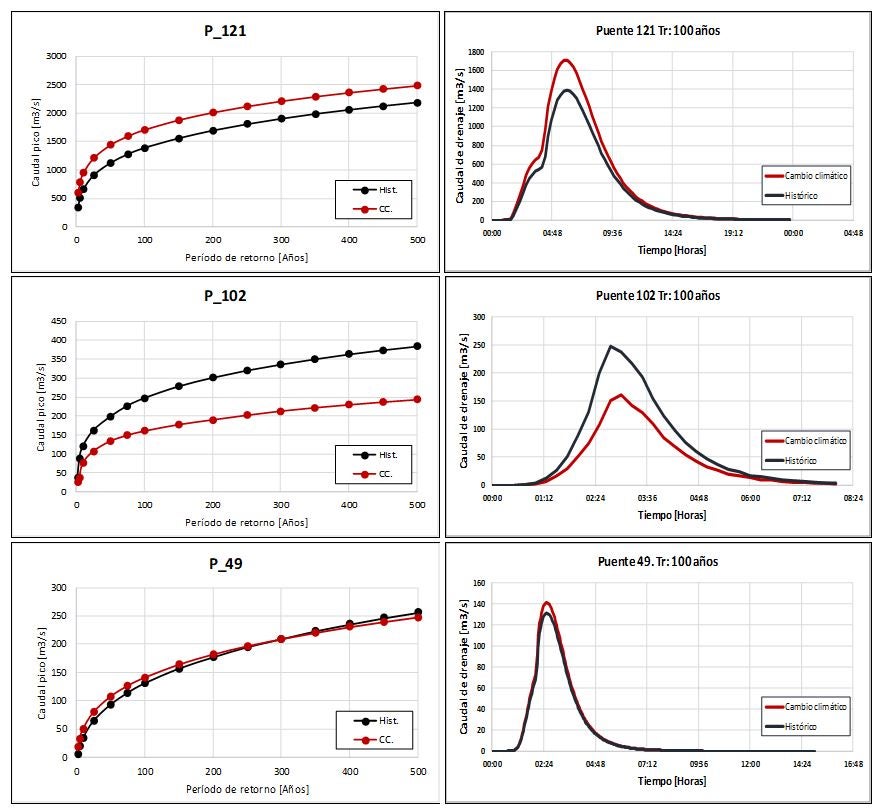 In the next stage of the program (hydrodynamic model with HydroBID Flood) the results of the hydrological model will be used as a starting point for the generation of flood maps, which provide information on flood height and velocity for the area of ​​influence of the bridges. Subsequently, these results together with the flood extension are considered for the geometric and structural design phase.

As the main finding of the hydrological model, it is found that the flows do not increase in all cases in the future scenario. The increase only occurs in 45% of cases and depends, among other aspects, on the location of the basins and the future projected precipitation by the GCM. As a result, for 45% of the bridges, the design phase team will have to base their analyzes on future flows. For the remaining 55%, the design must be carried out using flows from the historical setting.

Incorporating the resilience of transportation infrastructure to the risk of disasters and climate change is an activity that starts from the institutional, political and technical sectors that determine where, how and what infrastructure is planned and designed. In the planning stages, considering the effect of climate change as one of the underlying risk factors has a direct impact on the construction of safe, reliable and efficient infrastructure.

In the case of the 33 vehicular bridges in Haiti, the combination of hydrological models for historical and future scenarios allowed generating more complete and consistent results that, in turn, enabled the selection of critical scenarios for geometric and structural design in 45% of the bridges.