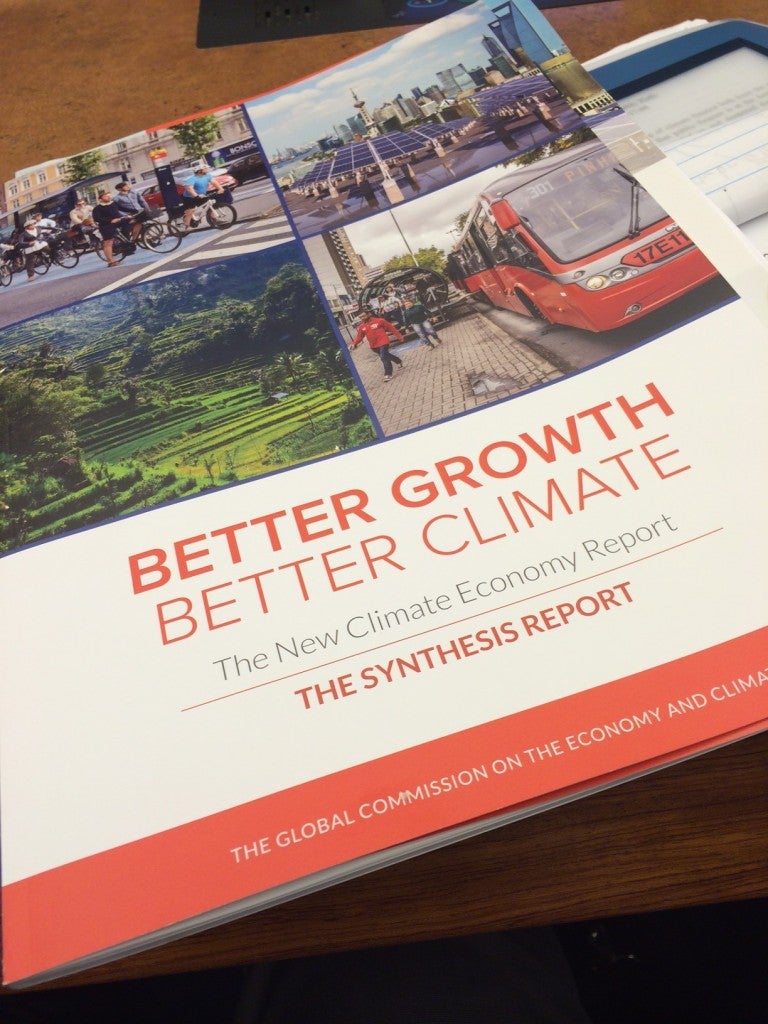 The much expected UN Climate Summit in New York, a one-day official event organized and led by the UN Secretary General Ban Ki-Moon, takes place this week. At the Summit, Heads of State, CEO of mayor banks and corporations, multilateral development banks and many other visible figures in the world of climate action will “step-up to the plate” and re-affirm their political and financial commitments to reduce emissions and increase climate resilience. All the analysis and talk in preparations for the Summit is about finding a positive link between economic development and sustainable growth, and the climate mitigation and adaptation objectives to be discussed in the upcoming COP in Lima and agreed upon at the COP in Paris 2015.

A good start was the launching of the New Climate Economy Report in New York, led by The Global Commission on the Economy and Climate chaired by former Mexican President Felipe Calderon and co-chaired by Lord Nicholas Stern.  The Commission was appointed by seven countries: Colombia, Ethiopia, Indonesia, Norway, South Korea, Sweden and the UK.  The IDB was part of the contributing and supporting institutions that over the course of a year provided factual data on climate activities, best practices, and current and future perspectives towards achieving a low carbon path.  Compared to other global reports, most notably the early Stern Report and many more that followed across the globe, this work strikes a nice balance between the science and economics of climate change, and the policy options and responses to the challenge.  The tone is optimistic (hence the subtitle “Better growth, better climate”), with positive messages aimed at reducing the contradiction (or opposition) between jobs and poverty reduction, and greenhouse gas reduction and climate resilience; the overall message is that the clean energy transformation is already underway, with a clear boom in renewable energies and other low carbon solutions. From the outset the report states that the focus “is not” on how the economies should adapt to the climate change that is already occurring, so readers should not look for any content or treatment of the climate vulnerability and adaptation challenges.

The report focuses on three systems with technical, economic and financial challenges and solutions:

[dropcap type=”circle” color=”#ffffff” background=”#FFBF00″]2[/dropcap]  Cities, with a clear analysis of urban challenges and promises of shifting to more compact and resilient cities that brings about economic savings, efficiencies and environmental benefits; and

[dropcap type=”circle” color=”#ffffff” background=”#FFBF00″]3[/dropcap] Land use, with better agricultural systems, protection of forests and rehabilitation of degraded lands as a means to reduce emissions and assure livelihood and ecosystem balances.

The report stresses the need for governments and other public and private stakeholders to work hard for laying out the framework for climate action and implement policies to put in place a price on carbon, reduce subsidies for fossil fuels and adopt innovative economic instruments such as green bonds, among others.  The report places much emphasis on private sector investment as the “engine” of energy transformation and low carbon development. It was quite encouraging to hear the Chairman of Bank of America, Chad Holliday, presenting the optimistic view that private investors have been fast in responding to the challenge when good to policies are put in place, especially to take clean energy investments to scale. In reference to the large low-carbon opportunities laying ahead, and to the need to take climate risks seriously in future investment decisions, he added:

The report establishes clearly the financial gaps if we are to achieve climate mitigation objectives, suggesting that international climate finance flows need to increase sharply if the agreed goal of mobilizing US$100 billion per year in public and private sector finance is to be achieved by 2020.

Let’s hope that the conversations and commitments next week in New York bring all the “energy and resources” needed to produce positive change.