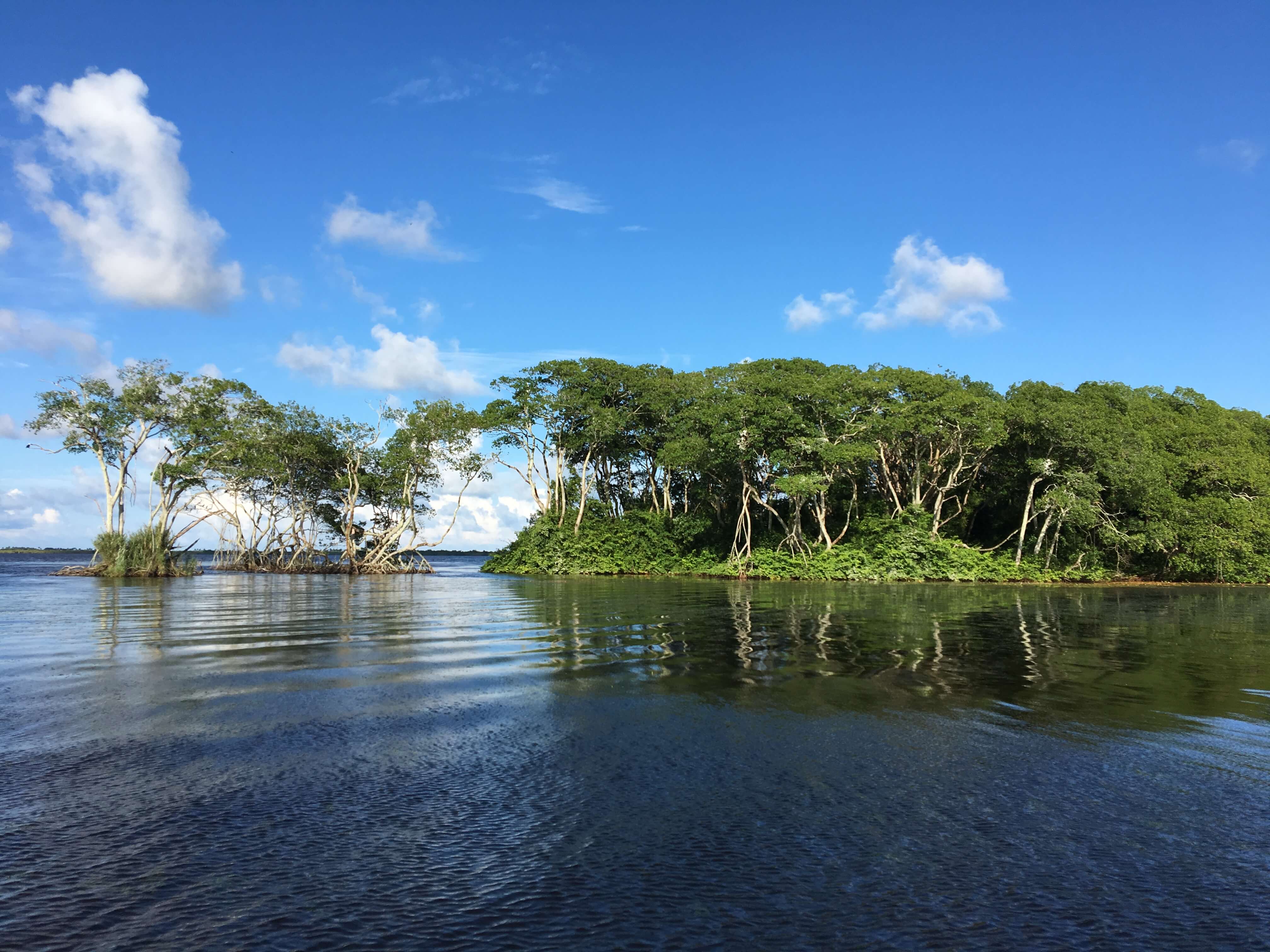 For urban populations, mangroves are usually unwelcoming places, full of insects, reptiles and mud. However, after half a century of ecological research, we now know that mangrove forests offer great value through a variety of environmental services such as nurseries for fish, crustaceans and mollusks, supplying food and medicinal plants, protecting against natural disasters and stabilizing coastlines. They also provide construction materials, can be sites of cultural and religious significance for indigenous populations as well as recreational and touristic places.

Additionally, mangroves fix up to five times more CO2 in the total biomass, found on the surface and in the soil, than do mainland forests.

This provides an invaluable environmental service of mitigating the effects of greenhouse gases.

According to FAO, Honduras went from having approximately 297,800 ha of mangrove forests in 1965 to 78,668 ha in 2000, a 73% decrease in 35 years. The loss of mangrove forest cover on the Caribbean coast of Honduras is mainly due to the expansion of African palm cultivation, livestock farming activities, the development of tourism infrastructure and illegal logging. In addition, weak governance contributes to deforestation and the degradation of natural resources.

To help offset this trend, the IDB implemented the “IDB Manglares” project[1], which brought technical inputs and institutional strengthening for the “Mi Pesca” project, executed by the MIF (Multilateral Investment Fund).

IDB Manglares conducted research creating an inventory of mangroves in the Moskitia area and focused on supporting the National Technical Committee on Wetlands, the entity responsible to ensure the proper use and protection of estuaries and mangroves in Honduras. This committee coordinates the sustainable use of marine-coastal resources and supports regional committees including the Regional Wetlands Committee of the Moskitia, which will monitor the mangroves of interest to the Miskito people, an indigenous people whose territory is formally recognized by the Honduran State.

The Moskitia region, located along the Caribbean coast in the northeast of the country, is characterized by a saline lagoon ecosystem and is inhabited mostly by Miskito communities (96%) as well as Tawahkas and Pech indigenous people, whose main economic activity is fishing. This region represents 15% of the Honduran territory, constitutes a natural reserve for Central America and hosts the second most important tropical rainforest in Latin America and the Caribbean.

IDB Manglares and Fundación Futuro Latinoamericano (FFLA) delivered five workshops for local communities on governance, conflict resolution and “do no harm” actions. The workshops were held in three locations in the Honduran Caribbean and most attendees were community members and local leaders of the Miskito communities organized around the Indigenous organization MASTA. IDB and international development staff, as well as state and local government officials participated.

The workshops allowed prioritizing the four main conflicts faced by local actors and provided a space to identify responsibilities associated with these conflicts and outlined negotiation strategies. The main challenges found were: 1) the decrease of fishing resources; 2) the need to strengthen control and supervision capacities and improve coordination between local authorities and indigenous councils; 3) improving the safety of fishing and artisanal diving; and 4) setting marine zoning limits. Once prioritized, the participants developed governance maps where they identified the conflicts, the stakeholders, as well as their own interests. Identifying stakeholders enabled attendants to outline negotiation strategies and work agendas to seek peaceful solutions to these conflicts.

The creation of the Association of Honduran Indigenous Miskito Fishermen (APIMH) was a positive and unforeseen outcome of the workshops, bringing together six indigenous territorial councils into a single entity to manage the governance of natural resources in the Honduran Moskitia. The participants showed a high degree of satisfaction and enthusiasm with the participative approach and the work of FFLA and the IDB-Mangroves Project.

The sustainable management of marine-coastal resources is a great challenge especially in hard to reach areas with limited government presence, such as the Moskitia. The project took significant steps toward strengthening governance, and during the next five years we are confident that the Mi Pesca Project will have a positive and lasting impact on improving the use of marine-coastal resources and local livelihoods.

Joseph Milewski is a Sector Specialist working with the IDB since 2001, he currently works on environmental, fisheries, forestry, rural development and tourism projects. His previous posting with the Bank include Guatemala, Jamaica, Brazil, Perú and Washington, D.C. Prior to joining the IDB, Joseph worked for the private sector in the pulp and paper industry and with a public sector utility in Canada, in areas such as human ecology, environmental impact assessments and environmental policy. Joseph is a graduate from McGill University in Anthropology and a has a master’s degree in Urban and Regional Planning.