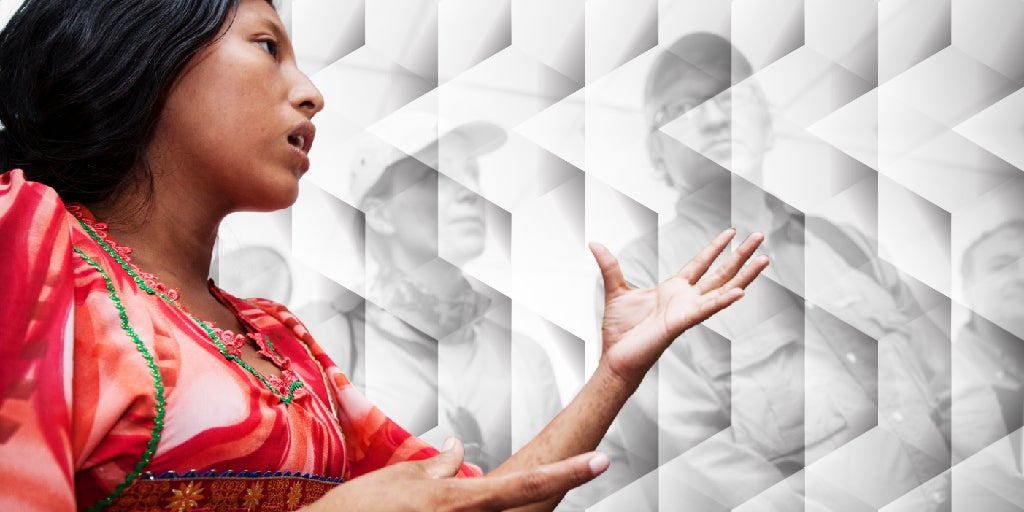 Today, on International Day of the World’s Indigenous People, a spotlight shines on 370 million peoples living across 90 countries. It is a time to recognize their achievements and contributions, and a time to highlight the need to promote and protect their rights and territories. It is also an opportunity to reflect on how to boost their economic development and promote their well-being.

The truth is that Indigenous peoples can represent a policy challenge for many governments. In many parts of the world, they are among the poorest and the most disadvantaged populations. They have been subject to racism, losses of lands, external controls and even coercive policies of assimilation. In Latin America, Indigenous people make up 14 percent of the poor and 17 percent of the extremely poor. Although rich in traditional knowledge, culture, identity and natural resources, material poverty affects 43% of indigenous households in the region, more than double the proportion of non-indigenous households.

But this pattern of poverty doesn’t have to be an everlasting fact. And policy can play an important part in spearheading the change. The question is, what form should it take toward Indigenous peoples in order to be most effective?

If you’re thinking one policy option is to do nothing, I will say that doing nothing has significant costs to Indigenous peoples and to the countries of which they are a part, who forego the benefits of a more productive and engaged population. In other words, doing something is not only the right thing to do, but the smart thing as well. So, what are the alternatives?

I’m going to turn to the United States in hopes that there is something in the story of what has happened there in the last few decades that may be of relevance to Latin America.

In the United States, what we’re looking at is a significant transformation. We have been seeing the first significant changes in a century as economic development takes hold in numerous tribal communities. In the late 1980s, at Harvard University, we set out to understand what was happening. Over the last three decades, the explanation has become clearer and clearer. A particular set of factors have been involved.

This shift turned out to be a key factor in the transformation of the Indigenous situation in the country. As Indigenous nations or communities gained power over their own affairs, they also gained accountability. In addition, putting them in the decision-making role brought their understanding, experience and governance traditions to bear on the problems they faced.

The third factor is culture. Building capable governing institutions is important, but those institutions also have to have the support of the people. They have to have legitimacy with those being governed. And legitimacy comes from what we called cultural match: the institutions had to reflect the ways the community believed authority should be organized and exercised. We found that institutions originating in Indigenous perceptions of what’s appropriate did better than institutions chosen for Indigenous peoples by outsiders. It also meant that the governmental solutions developed by successful Indigenous nations varied, because their cultures and preferences varied. Diversity in governmental form was not a problem; it was a solution. This was essential: governing systems that had the support of their peoples were more effective and productive.

And the fourth finding is that nations have to do some strategic thinking of their own. What kinds of communities did they want to be, twenty or thirty years from now? They had to think in multi-generational time scales and bring that sort of strategic thinking to bear on current economic decisions, on how they use resources, on how they spend funds, on the kinds of economies they build.

Where we saw nations or communities adopting these principles or working toward them, we saw increased economic traction. We also saw capable communities becoming reliable partners with non-Indigenous actors—in economic development, in the management of lands, in the recovery of wildlife species and in the delivery of social programs. In short, we saw communities that worked.

That’s the United States. What about other places? Are these results transferable? There is at least some evidence that the answer is “yes.” We’re seeing some similar results among First Nations in Canada and suggestive evidence along similar lines in both Australia and New Zealand.

Of course, all four of these countries are highly developed economically. So what about Latin America? That’s a question I cannot answer, but I think it is a question worth exploring. We’re seeing a major movement underway around the world as Indigenous peoples attempt to reclaim a voice in their affairs and regain some control over their lives and their lands. Perhaps this movement is key to new relationships, new opportunities, and new economic benefits, not only for Indigenous peoples but for the countries of which they are a part.