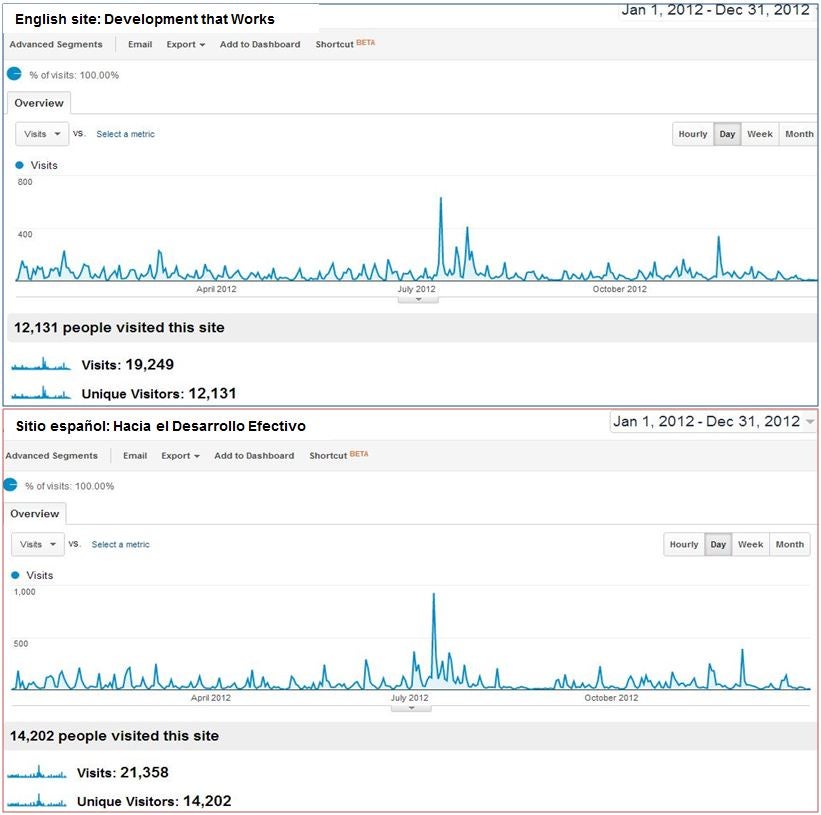 Welcome and thanks for coming back.

We had a good year in terms of readership and we want to share our numbers (over 40,000 visitors for our two language site), but first allow me a (very) short blurb.

When we started this blog, the basic idea was two-fold: to add a Latin American voice (or voices) to the development effectiveness debate and to add a voice in Spanish to a debate that is held mostly in English.

So we write and post everything in both English and Spanish (thank God for Google Translate) and try and reach two different audiences. Spanish-only speakers with an interest in development economics and effectiveness and English speakers interested in effectiveness in Latin America and the Caribbean.

As it is difficult to imagine a person that would read an entry in Spanish and then re-read it in English- although there must be a couple of masochists out there – the numbers are presented for each language and then combined. So think of this as looking at the mirror and smiling, twice.

So if our site were a concert hall like the Colón in Buenos Aires (2,487 seats) or the Royal Opera House in London (2,256 seats) we would have had almost 9 sold out performances both in Spanish and in English.

In the English site, the top 5 locations where readers come from are the US, Colombia, Mexico, the UK, and Brazil (in the Spanish site the list is Colombia, US, Peru, Mexico, and Argentina)

The most popular posts in English (descending – not condescending order) were:

It is interesting to note that only 5 entries on this list, also made into the top10 list of our Spanish version.

Finally, thanks to our loyal single reader from Mongolia who views 4 pages per visit. Здоровье и спасибо