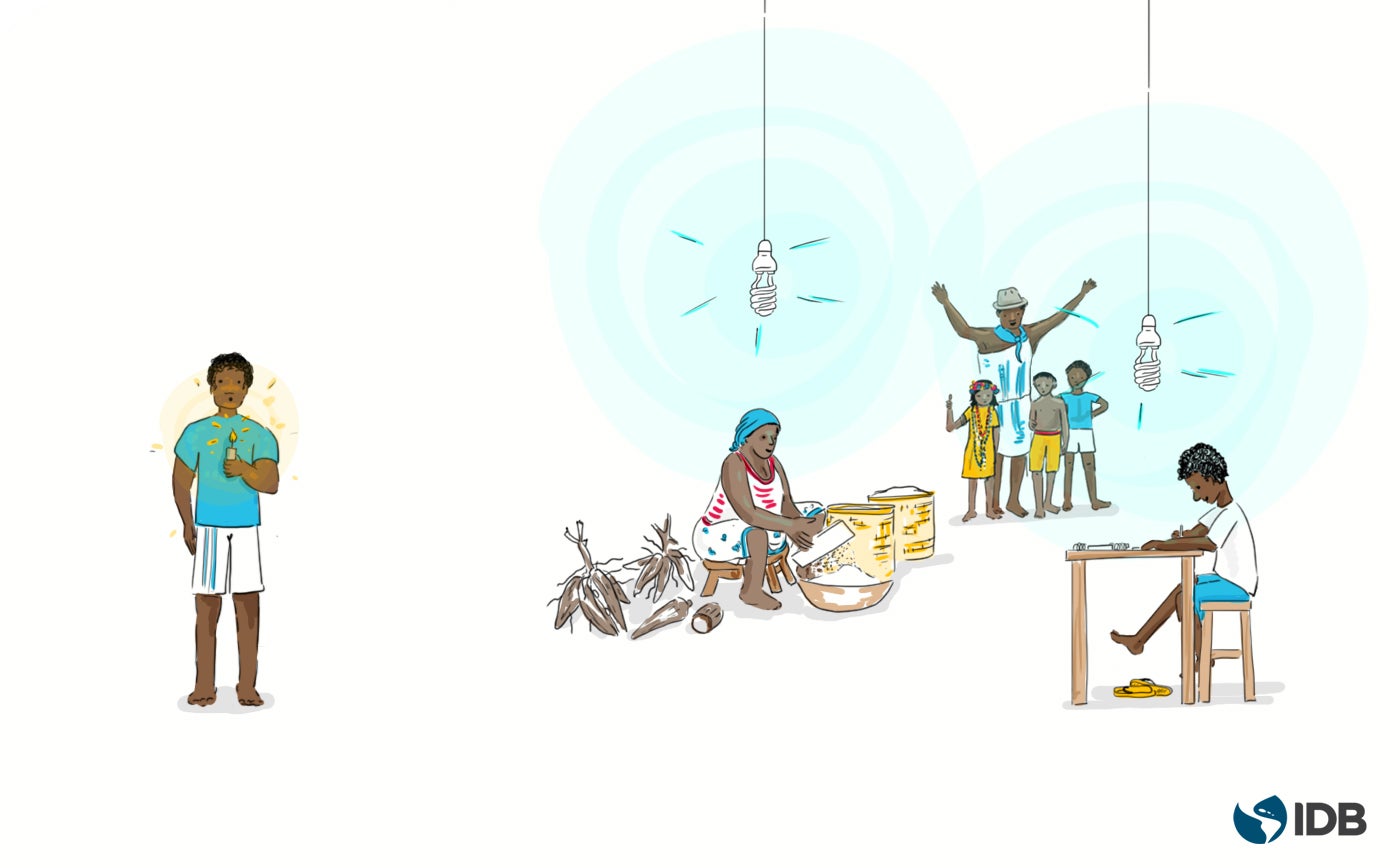 An electrification project in the interior of Suriname—known as the Hinterland—is leading researchers to believe that electricity could be one of the keys to happiness. The statement is certainly a bold one but is not new. A recent study of the impact of an IDB-backed project to connect five villages in the country’s rural interior to an electrical grid suggests that locals find that their quality of life has improved.

The project was implemented between 2016 and 2020 and benefitted both Maroon and indigenous communities in the sparsely populated area of the Hinterland, which harbors little over 200 villages, many of which can only be reached by plane or boat.

In this case, project beneficiaries were asked to evaluate the lives of their household or of the households in their village in comparison to those of other households and villages in Suriname. They were asked to think of their wealth not only in terms of financial income, but to also consider the number of children they had and other factors such as nutrition, health, access to clean drinking water and clean air.

Before the electrification program was implemented, on average the project beneficiaries placed their household on rung 4 and their village on rung 5.

The effect of the IDB program on subjective wellbeing, was therefore found to be positive. And the results were similar for male headed and female headed households.

These findings were consistent with the well-known study by Lee et al. (2020) which concludes that electricity increases subjective wellbeing.

Globally, access to reliable electricity is considered an essential driver for development and wellbeing. The United Nations has called for “affordable, reliable, sustainable and modern energy for all” to be met by 2030 under Sustainable Development Goal 7.

But for the 10% of the population of Suriname (54,000 Maroons and 8,000 Amerindians) who live in the interior of the country, most depend on small, polluting diesel generators which are expensive to run, and supply electricity between 4 to 6 hours a day, at most.

That is why the IDB has been supporting the government of Suriname to increase the access to reliable and clean electricity in the Hinterland. In 2017, the IDB financed the infrastructure to connect several communities in the area of Powakka to the main grid. In 2018 the electrical utility of Suriname (EBS), completed its off grid solar plant, which provides electricity to the villages in Atjoni and Pokigron. Currently the IDB is supporting the development of 11 new solar mini grids in the Hinterland, in remote villages only accessible by boat or plane.

The study of these projects also revealed other interesting results.

Results also show that the program has increased ownership of electric durables such as boilers, fans, flat screen televisions, refrigerators and freezers, washing machines, rice cookers and stereos and decreased expenditure in non-grid energy uses by 1,000 SRD of 2015 per year (about 250 USD), with significant savings in purchasing batteries (by about 500 of 2015 per year or 125 USD).

Another interesting finding of this study is that villagers that benefited from the electrification projects were less likely to have household members leave in search of education or work opportunities outside the village. We found a 30% reduction with respect to the control group. Up until recently, young people from these remote villages in Suriname had consistently migrated to the capital Paramaribo and surrounding urban areas, in search of a better quality of life.

The study faced certain limitations since the Covid-19 pandemic hindered data collection and sample sizes were at times too small to produce conclusive results. As a result, the projects’ full effects might occur after the evaluation was completed and certain aspects will warrant further investigation.

But the results at this stage are promising and point towards a future for Suriname that includes universal access to clean and reliable energy.

If you want to learn more about the IDB Group contributions to the Sustainable Development Goals, please visit us www.iadb.org/SDGs