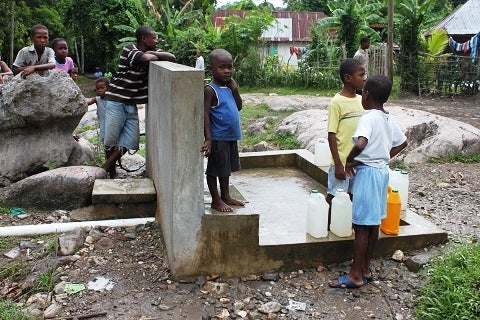 The World Health Organization and UNICEF Joint Monitoring Programme estimates that, in 2011, 94% of the population of Latin America and the Caribbean had access to an improved drinking water source (up from 85% in 1990); and 82% had access to improved sanitation facilities (up from 68% in 1990). But, does access to better water and sanitation, in particular piped infrastructure, improve child outcomes?

Clean water and a more hygienic sanitary environment could reduce the ingestion of fecal microbes by children. Additionally, holding quality constant, water that is readily available may reduce the need for storage within the home (where it gets contaminated), and may increase the frequency with which a variety of hygienic activities, such as bathing, hand washing, and general cleaning, are carried out. In either case, an improved water source could break the fecal-oral transmission chain. This, in turn, could have positive effects on child health and development.

There are a number of papers that provide credible evidence that access to, and the quality of, water reduce child mortality. In some cases, the reductions in mortality are substantial. These papers often use historical data. They find, for instance, large reductions in cholera fatalities in the London epidemic of the 1850s that were associated to better quality water.

Other findings include the reduction of mortality in the US due to the adoption of water filtration and chlorination technologies. Studies from the US and from Argentina find that improvements in water infrastructure have generally had larger effects on child mortality among the poor, and thus reduced socioeconomic mortality gradients.

The water situation in Latin America

Empirical work done with my colleagues at the IDB document some interesting trends in access to water and sanitation in the region, where there is considerable variation both within and across countries. We note four facts.

Lots of progress has been made in expanding access to water and sanitation in Latin America and the Caribbean, but there are still countries and regions within countries, where services are missing. We know that water and sanitation are crucial for child health and development. The challenge is to bring them to those who still have those needs. This is not always easy as some of these areas might be disperse or difficult to access.

What is the situation of the water and sanitation access in your community? Tell us in the comments section below or in Twitter.

Norbert Schady is the Principal Economic Advisor for the Social Sector at the Inter-American Development Bank (IDB).