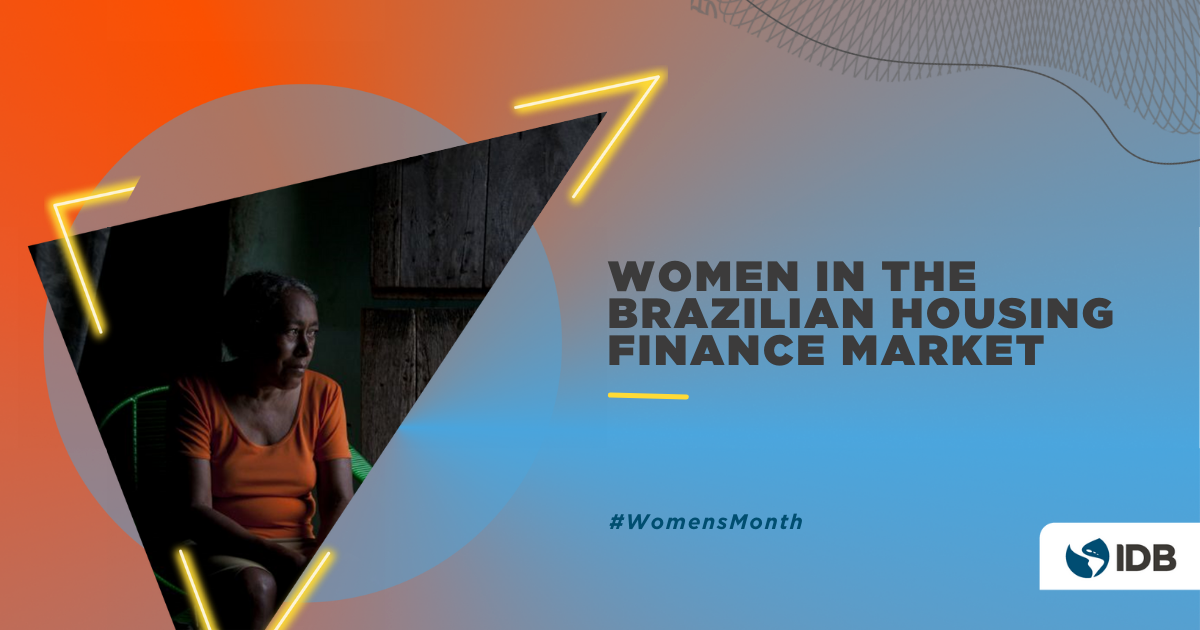 Gender gaps in the Brazilian housing sector: 60% of the deficit lays amongst women-headed households

The Brazilian Institute of Geography and Statistics (IBGE) published in 2019 a study on “Gender statistics: social indicators for women in Brazil” in an effort to enrich the gender discussion and to contribute to place the issue of gender equality amidst the formulation of public policies in the country. This study was repeated in 2021, to strengthen and consolidate the initiative.

The level of education is a good predictor of future income and is therefore frequently used to inform credit underwriting. Since women exhibit higher education rates than men throughout age brackets, it should favor them in accessing mortgages. Yet, recent housing deficit figures reveal gender inequality amongst poor households: 60% of households in deficit situation are woman-headed, and out of the 3 million households overburdened by rent, 62.2% are headed by women.

Figure 2: Sex-disaggregated data on head of households shows that the weight of women-headed household in the Brazilian deficit is growing higher over the years

Gender gaps in the Brazilian housing finance market: while 89% of highly subsidized social housing is delivered to women, only 38% of market mortgage loans go to women

Gender gaps in access to housing credits are common worldwide, as highlighted in the IDB study “Gender gaps in access to the mortgage market in Ecuador” (2021), which analyzes the access of women in conditions of poverty and moderate poverty to obtain a home loan in the formal financial system, dimensions and characterizes critical nodes and potentialities (supply and demand), qualifies the current demand and the type of housing for which credit is granted, as well as identifies the main challenges faced by women. Recommendations for projects and public housing policy contribute to narrowing the identified gender gaps in the country.

However, many countries do not count with disaggregated data to assess this potential gap. In the case of Brazil, no studies were found on housing credit by gender, nor any data set publicly available, whether in the Central Bank statistics portal, with the National Association of Credit and Savings Entities (Abecip), or with any other Brazilian institution. Therefore, the present analysis was based on data obtained through the information access law: overall, in the Housing Finance System´s (SFH) portfolios, women hold 38% of housing loans, whereas men, 62%. When the data set is disaggregated by income, it shows that the higher the income, the lower is women´s participation. In the lowest income range (up to 1 minimum wage), women hold nearly 50% of all mortgages, but in the top range, incomes above 20 minimum wages, women hold 26.6% of all mortgages. In most income ranges, the average loan value is slightly lower for women, although the differences are not very significant.

While Central Bank data portrait mortgages from all savings and loans banks operating in the country, a similar overall distribution is found specifically within ‘Caixa Econômica Federal’ portfolio. Caixa is a public bank, and the country´s main housing bank. It holds an overall housing finance market share of 68.8%, spread between over 92% on FGTS* credit lines, and 43% on SPBE** mortgage portfolios. Figures show that regardless of the funding source, women are underrepresented, despite average income and age being quite similar to men´s.

A very different outcome is found in the lowest income bracket (named “Faixa 1”) of the “Minha Casa Minha Vida” Program (PMCMV), the main national housing program active from 2009 to 2020 (transformed in 2021 into “Casa Verde e Amarela” Program). Although for this income bracket, the program does not entail financing from banks (housing units are produced with public resources, and handed out to locally selected beneficiaries, who in return are charged with low installments – from 5 to 20% of income, for a set period of 10 years), this central element of housing finance for more than a decade established a strong affirmative approach to gender issues by requiring that women be given priority to sign the contracts and receive property titles in their name. Consequently, under “PMCMV Faixa 1” from 2009 up to December 2019, 89% of contracts had been signed by women, whether head of household or not. It is also interesting to highlight that in case of divorce, the property remains to the women, regardless to the matrimonial property regime.

Figure 5: Women are default signatories of “PMCMV Faixa 1” contracts, except when legal custody of the children belongs to the man

The current economic situation suggests that women now have an even harder time qualifying for a mortgage. Unemployment record estimates indicate that women were impacted more by the Covid-19 economic crisis with a 16.8% rate against 12.8% for men, suggesting that gender inequalities may be becoming worse in the country.

How to address these gender gaps in Brazilian housing finance?

As highlighted in IDB guide for more inclusive cities and its section on housing, it is time to take action and address gender gaps in the sector. More specifically, it is certainly time for more affirmative measures in SFH across fundings and credit lines in Brazil, but for that, more gender-sensitive analysis and indicators are needed: gender-disaggregated statistics on credit rating, delinquency, client applications and rejections, also disaggregated by age and education. Gender-disaggregated data sets would better inform the design of credit products by financial institutions, weighting indexes where women generally perform better, such as savings, credit rating and delinquency, as studies in other Latin American countries indicate. The analysis developed in 2020 by the IDB in “Bad taste: Gender Discrimination in the Consumer Credit Market” highlights the following findings:

Other important measures may include:

Better access to affordable mortgage credit through gender-based policies and regulations is, therefore, a fundamental step forward to expand women´s access to formal housing and secure tenure in the country. Socioeconomic improvements for women pass on to children, and that is precisely why women are key to breaking intergenerational poverty transmission. Moreover, lack of access to housing oftentimes prevents women from accessing better education and job/income opportunities and even from escaping an abusive relationship. Indeed, a 2014 UN Habitat report on “Women and Housing” observed the link between housing (including access to housing finance) and gender-based violence: “While some national and local governments have some policies and initiatives to support victims of violence, a comprehensive approach to housing for women and children facing violence is still not on the radar of the housing sectors as well as governments and other decision makers” Nonetheless, some Brazilian local government have taken initial steps adopting legislation that mandates setting apart a certain number of public-built housing units for gender-violence victims – see Pernambuco State and the Municipality of Campo Grande, for instance). Therefore, the importance of gender affirmative measures on housing policies and credit extends far beyond the housing issue.

Last, but certainly not least, as highlighted by the IFC report “Her Home: Housing Finance for Women” (2020), female-headed households, or those in which a woman is the primary income earner or decision-maker, represent a very large, unserved market in the developing world. Therefore, targeting women is not only about fighting gender discrimination and inequality, but also about fostering the development of a more sustainable housing market, in Brazil and worldwide.

Claudia Magalhães Eloy is an urban planner with a master’s degree from the University of Pennsilvania and a PhD from the University of São Paulo (USP), along with two MBAs, one in Public Sector Management (UFBA) and the other Construction Economics and Real Estate Development (OEB). After having worked as housing program coordinator for Bahia’s state housing company (URBIS/Conder, Bahia) and as planning manager for the Regional Development Bank (Desenbahia/Desenbanco), she has been working as an independent consultant, specialized in housing finance, funding, policy and subsidies. As such she has done work for the InterAmerican Development Bank, the World Bank, Fundação Instituto de Pesquisas Econômicas (FIPE) and the German Development Agency (GIZ) in technical cooperation with federal, state, and local governments, as well as for the Brazilian Home Builders Association (CBIC), Sinduscon-SP, Direcional/Condominium, among others. These works have involved assessing national and subnational housing policies, identifying adequate housing finance instruments for low-income households, developing strategies and programs to provide affordable housing, recommending policy and institutional reforms to expand investment and promote long-term sustainability of the housing sector. She participated in the elaboration of Brazil´s National Housing Plan (PlanHab, 2008/2009) for the National Housing Secretary/Ministry of Cities as finance lead specialist. She is the author of the Latin America and the Caribbean column of the IUHF Journal (since Jan, 2017) and cofounder of the Housing Finance Observatory blog (www.ochbrasil.blog). She is also a member of the directive board of a non-profit association based in São Paulo and winner of several prizes – Santa Fé – which assists homeless children and adolescents. Claudia has published several articles as well as chapters of books on housing finance and she has also given housing finance courses for professionals of social housing companies and local governments at Casa da Cidade-SP, as well as seminars/webinars on housing finance.