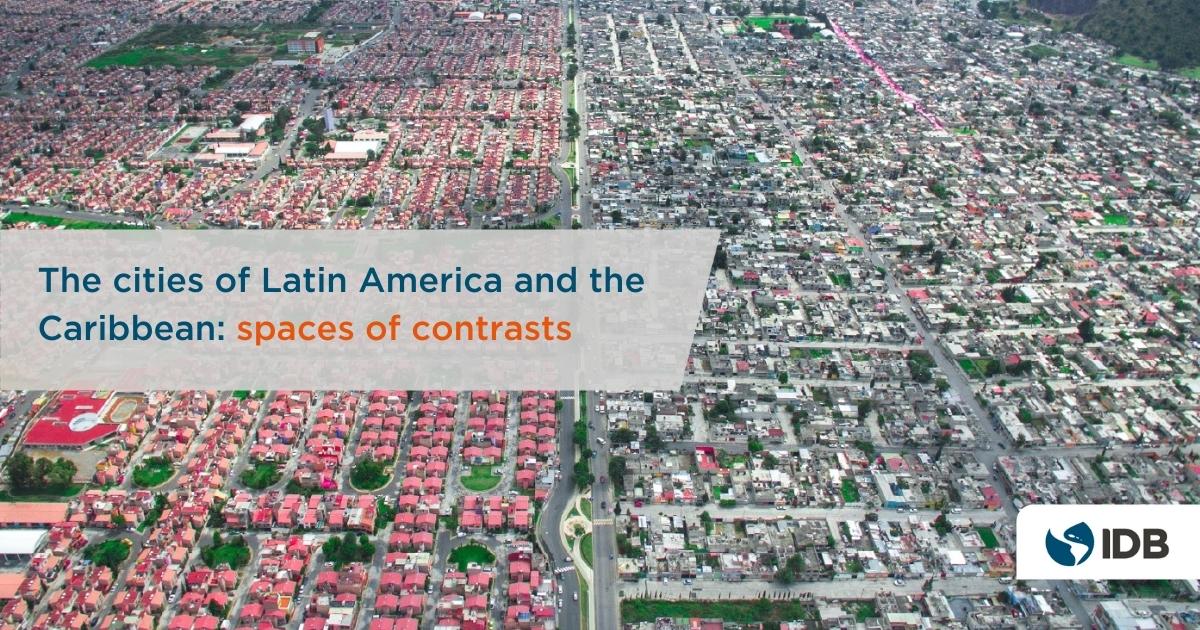 The cities of Latin America and the Caribbean (LAC) are full of contrasts. They are the place where poverty and extreme poverty rub shoulders daily with wealth and extreme wealth. Without going any further, 184 million (equivalent to 30% of the total population) of people live in poverty in the region, and 1 out of 4 people who live in urban areas live in informal settlements.

Despite efforts to improve living conditions in our region, three interrelated dynamics continue to be present in our cities: discrimination, segregation, and fragmentation. This trilogy naturalizes an endemic problem in LAC: inequality.

In this blog we address the way in which unequal societies promote unequal urban planning in our cities, something that goes beyond economic differences and affects the dynamics in which we interact. Continue reading and discover how discrimination, segregation and urban fragmentation are promoted in cities.

Urban discrimination: right to the city

Urban discrimination materializes when a person cannot enjoy their right to the city under equal conditions, nor do they have the same opportunities, beyond their capacities and potentialities.

In LAC, many women, children, LGBTIQ+ people, indigenous people, afro-descendants, older adults, immigrants, and people with disabilities, among others, experience urban discrimination. For example, in the LGBTIQ+ population, the visibility of their gender identity and expression is challenged with insults and ridicule that make daily use of open space, access to employment and housing difficult. Therefore, it is vital to recognize the intersectionality of urban discrimination.

Urban segregation refers to the concentration of a social group in a specific area of ​​the city, forming socially homogeneous or exclusive areas due to social, economic, and cultural conditions.

There are two types of segregation. On the one hand, there is the socioeconomic, which has to do with the level of income, education, technology, livelihoods. On the other, the sociocultural, which is related to language, nationality, religion, ethnicity. Both generate spatial imbalances and widen gaps, as well as social and economic stratification and hierarchy.

The population is the one who occupies the city and builds its own habitat. Although the low- and high-income population is located on the outskirts of the city, far from urban centers, there is a notable difference in the quality and access to infrastructure and services, in the organization and ways of relating, and above all in the reasons why they decide to live in the urban periphery (image 1).

It is increasingly difficult for most of the population to access urban land and housing through the formal market and the option they have is to manage their own habitat, which takes more than 20 years to consolidate.

It is important to understand and measure the multiple segregations in cities, considering the temporality, the context, and the history, in order to know the impact of who is segregated and the reasons for those who exercise segregation.

Urban fragmentation is the physical rupture (through gated communities, differences in facilities and services) and symbolic (resistance, behavior, attitudes, and practices), a consequence of unequal societies. It is characterized by homogenizing the urban space in parts physically and in the social imaginary. These practices, very common in the region, generate disintegration of the urban fabric, accessibility problems, functional disarticulation of urban activities, diffuse identity, and uprooting.

Urban fragmentation manifests itself through the creation of spaces that produce social, economic, spatial, and symbolic distance in a city. There is an interplay of dependency and mistrust. Urban fragmentation makes it difficult for the city to function and fosters inequalities in access to resources between neighborhoods where the highest-income population lives and those inhabited by poor sectors.

Therefore, there is a differentiated appropriation of the symbolic fields and the urban infrastructure, where the capacity of the population to build their relationship systems in the cities is different. For example, the displacement of a female head of household with children, who combines her time between generating income and taking care of the home. For her,  this relationship system is based on support networks and requires proximity to services; if the city is fragmented, it will make her coexistence difficult.

A call to action

Studies carried out by the Inter-American Development Bank (IDB) show that urban inequality goes beyond economic and physical aspects and has to do with learned cultural and symbolic codes. Therefore, much remains to be done. On the one hand, it must be recognized that it is not enough to study the subjects of discrimination and segregation on the poor side of the fragmented city. It is vital to understand the behaviors, attitudes, and practices of those who exercise discrimination and segregation on the side of the city in better conditions. And on the other, it is necessary to act in the material and subjective, in the learned unconscious. Only in this way will it be possible to overcome the contradictions arising from urban concentration.

Therefore, a call to action is vital to eliminate discrimination, segregation, and urban fragmentation in the cities of our region. That is why it is necessary for decision makers in cities, as well as the inhabitants, to understand and promote public policies and actions aimed at having zero tolerance for discrimination, segregation, and urban fragmentation. Thus, it is necessary to free cities from existing stereotypes, breaking learned mental barriers, promoting change in regulations and recognizing a diversity that cross-cuts every action, project and policy in the region.

Technical Consultant in the Housing and Urban Development Division of the IDB. Professional in social, environmental, economic and cultural issues in Latin America and the Caribbean. Doctor in Cultural Studies: memory, identities, territory and language from the Santiago de Compostela University - Spain; Master in Social Sciences mention in Local Development and Territory by FLACSO - Ecuador. Sociologist with a major in Development - PUCE; Specialization in Local Management for the Development of the Urban Popular Habitat. National Dance Instructor. Experience in several Latin American and Caribbean countries in project management for Urban Development, Social Housing, Resettlement, Climate Change and Cities, Rural-urban, intra-urban and international migration, Citizen Participation, Inclusive Public Policies, Organizational Strengthening, Applied Research and Mainstreaming the Approach to Law, Gender, Diversity and Climate Change. He has held positions of direction, coordination, management and consultancy of social, environmental, cultural and economic projects in various public, private and national and international cooperation institutions. Graduate and postgraduate teacher and researcher. Speaker at national and international seminars and author of several publications.