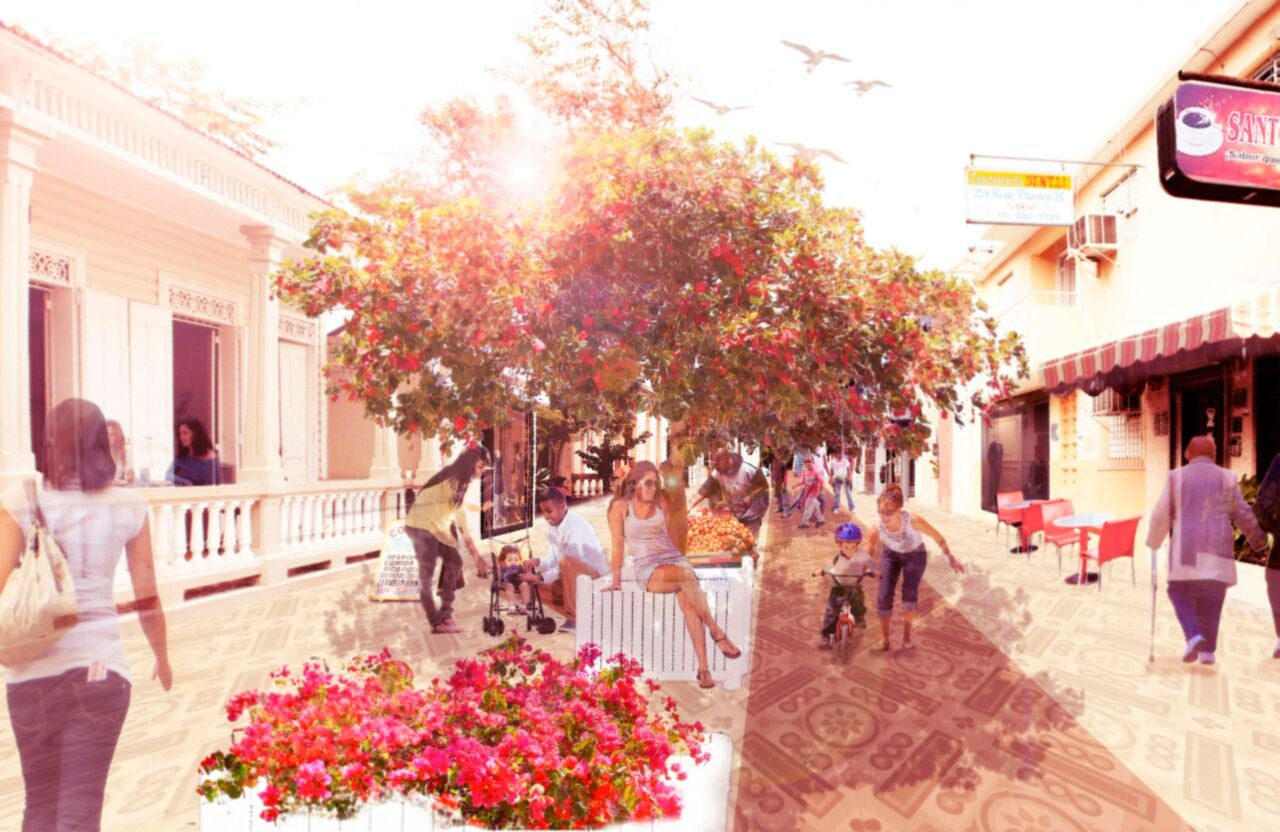 The Dominican Republic… Has it all! is the official tourism slogan.

As Europeans, what we immediately think about when it comes to the Dominican Republic are white beaches, palm trees, coconut rum and resort tourism. Last September—escaping the European winter—I arrived in a plane full of tourists from Vienna to the caribbean island. When I reached my final destination of Santiago de los Caballeros, I was confronted with a different reality than that depicted in tourism brochures.

Santiago is the second largest city in the Dominican Republic and the only caribbean city that is situated inland. This urban agglomeration grew along the Yaque del Norte river as the capital of the fertile Cibao Valley, where tobacco, rice, coffee, and cacao are cultivated. Up until now, Santiago de los Caballeros remains untouched by the effects of mass tourism unlike many other parts of the island. This is probably the reason why many people consider Santiago as the “most Dominican“ city. I had four months time to find out what this actually meant.

The goal of the Urban Design in Santiago de los Caballeros was the rehabilitation of the Centro Histórico de Santiago. So, our first step was a city walk. While exploring the historic city center, you will experience a unique sensorial experience: Streets are crowded with people, cars are honking, and informal vendors are blocking the pavement. Merengue is blasting from every corner and the smell of empanadas and exotic fruits fills the air. It is all about the street life which defines the urban spaces. However, by night time, as soon as the shops close, the streets become empty and the city center is considered a dangerous place to be.

It is hard to define what the Centro Histórico de Santiago is just by looking at it’s built structure: An uncoordinated mix of different buildings, one may find a ten-story modernist office building right next to a small scale wooden Victorian house.

On a second walk with closer inspection, in addition to learning more about the history of the city, one can find some treasures left over from former times. Buildings like the Hotel Mercedes, the Tabacalera and the Centro de Recreo are relicts of a period when the historic city center still had the function of a city’s center. It was where people used to live, where some of the most important shops of the city were found and where tourists resided (in the finest hotels of course).

So what happened? In the last decades, structural changes have influenced our cities. The appearance of cars, shopping centers, free economic zones and new lifestyles, changed the function of the historic city center from a mixed-use zone into a mono-functional comercial district, which dead at night and during weekends.

Given this situation, the questions that were brought forward were: What can we do to navigate this tendency into a different direction? How can we bring a variety of urban activities back into the city center? The slogan was Volver al Centro! (Return to the center!).

The Urban Design Lab is a participatory urban design methodology that involves explaining, listening, readjusting and the initiation of a dialogue with the community. In Santiago, we convened several focus groups and workshops to develop visions and strategies for the city‘s future. In other words, we invited citizens to dream their ideal city with us by participating in three activities:

With all this information, visions and ideas, we developed an urban design project that corresponds to a common vision: Santiago does not need any more segregated, anonymous spaces like shopping centers and private recreation clubs, which have multiplied in the last years due to insecurity and social segregation. As a result, Santiagueros forgot the importance of public spaces. The goal is to remind them of the importance of these spaces for quality of life in the city.

We decided to work in a defined zone of the historic city center that can work as an incubation area for further development. The design project proposes various interactions, from improving public spaces to reducing traffic, the rehabilitation of unused buildings and different housing prototypes. It is a simple project, which can be implemented step by step and does not require high investments.

Once the project was completed, we presented the results to the public. It was a very special occasion as all the different actors that participated in the planing process came together and gave their feedback.

It was an enriching experience to work with these different actors in Santiago de los Caballeros, all of which were very proud and emotional about their city. Collaborating with the Plan Estratégico de Santiago (PES), the municipality and other local partners was very helpful during the entire planing process.

The result of all these efforts is a design project which takes into account local interests. It is a proposal, which can create sustainable, common public spaces for social interaction. It is about creating a city center for everyone. Let’s return to the center!

Tamara Egger is currently studying her Master’s Degree in Architecture and Urban Design at Vienna University of Technology. She has completed architecture studies in Vienna and Berlin and participated in an exchange program with Tsinghua University, Beijing. Since 2014, Tamara has participated in the ESCI Internship Program, a cooperation between Vienna University of Technology, Austrian Ministry of Finance and the Inter-American Development Bank. She has been responsible for applying the participative methodology of the Urban Design Lab in Santiago de los Caballeros (Dominican Republic) and Valdivia (Chile).