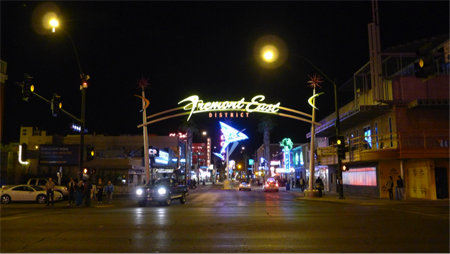 Today, the urban core of Downtown Las Vegas looks abandoned, but a leading US business is working hard to change that. While the redevelopment of old city centers has traditionally been the role of government, in Downtown Las Vegas, Zappos, the major US on-line shoe retailer, is involving itself on an unprecedented scale using a unique new urban lifestyle approach.

Such direct intervention has the potential to not only be a good investment for the private company, but also for local government and, most importantly, the city residents – that is, if it is done right. In Las Vegas, new business opportunities, creativity, entrepreneurism and a rediscovered appreciation for face-to-face human interaction are reshaping the image of the city center from a neglected, mono-functional and run-down area into a thriving, creative and human-scale community.

Indeed, there are lessons to be learned from Las Vegas!

Zappos recently moved its headquarters from Henderson, Nevada, to Downtown Las Vegas, into the former City Hall, built in 1973. Zappos had purchased the building from the city and remodeled it to better suit its purposes. For those with little knowledge of Downtown Las Vegas, this was a surprising move since run-down casinos, motels, parking lots, voids and urban decay have characterized the area for decades – in other words, perhaps not the best environment for the headquarters of a top US company.

What’s more, Zappos CEO Tony Hsieh also embarked on a real estate buying spree, purchasing underutilized properties in the surrounding area and launched the Downtown Project, using US $ 350 million of his own money to lead a renewal of the area around the new headquarters within the next five years. Instead of a single-campus model and an artificial environment for its employees, Zappos is trying to rejuvenate and activate the downtown, using the company’s 1,500 employees as economic drivers.

Krissee Danger, a tour guide for the Downtown Project, described large parts of Downtown Las Vegas as run-down and missing basic services like grocery stores and laundromats, as well as a more urban feel overall. The urban revitalization effort is comprised of US$ 200 million for investment in real estate, mainly for residential projects, US$ 50 million for small business, US$ 50 million for education and another US$ 50 million for tech startups through the VegasTech Fund. A mobility program providing shared bikes, carts, cars and buggies to employees – to be expanded to all residents in the future – will provide residents with alternative transportation options and greater connectivity within Downtown, as well as reduce the cost of traditional car ownership.  The construction of a “Downtown Container Park” will generate social and commercial life in the area.

This idea of creating community by attracting new habitants to settle in the downtown is inspired by Edward Glaeser’s Triumph of the City.  The book is prominently displayed among a wall of books in Hsieh’s apartment atop a high-rise apartment building in Downtown Las Vegas. The Downtown Project seeks to create a dense (250 habitants / hectare) and walkable urban environment with a distinctly urban feel using mixed-use developments with lively, ground-level activities.

However, it’s worth noting that Zappos is not the first to attempt to revitalize Downtown Las Vegas.  Other public and private entities have used traditional and new economy approaches to redevelop the city center.  The City of Las Vegas and its Department of Planning have been working to reinvigorate the area and several years earlier, before the recent economic slump, put flexible zoning in place.  The zoning encourages urban development and design that maintains the viability of Las Vegas’s historic gaming center, Fremont Street, and enlivens its surrounding blocks.  The City has also been encouraging a budding arts community in an industrial area nearby. On the first Friday of the month, the areas hosts “First Friday” closing local streets and throwing open the doors of art galleries in the area to create an outdoor and indoor festival featuring bands, food and art.

The El Cortez Hotel and Casino, bordering the Fremont East District, has also invested in the success of this corridor by converting a former medical office building it was using for administrative offices into an art and design center.  Called “Emergency Arts”, it is a small-scale urban intervention with co-working space for creative businesses, galleries and a café.  The El Cortez also sponsors a shuttle between Downtown and the Arts District on First Fridays.

Other actors such as the University of Nevada at Las Vegas’s (UNLV) Downtown Design Center also contribute to Downtown through urban design and urban development studies. Director of the Design Center Ken McCown spoke to us about their latest project: a pop-up park on East Fremont Street on National Park(ing) Day in September, 2013.

There is a danger that Zappos’s large-scale assault on urban decay could crowd out other traditional, but critical, players in Downtown’s ongoing revival. Not involving these entities risks returning the area to the mono-functional no-man’s land it had intended to eradicate in the first place.  Therefore, to be successful, the company needs to collaborate with the other legacy stakeholders at work in Downtown Las Vegas – city government, private property owners, local entrepreneurs, the university, and the surrounding community.  And that would be another lesson learned from Las Vegas.