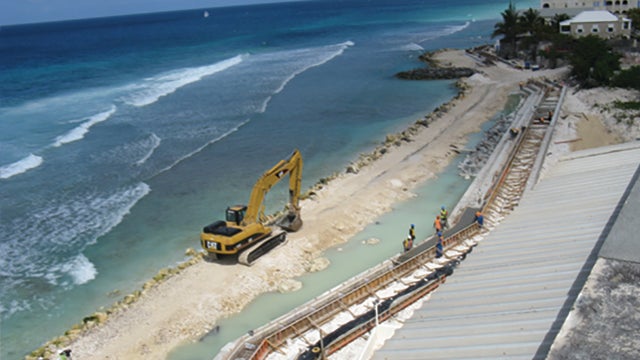 Updated building codes can help the Caribbean face disaster. But the region also needs a better way to think about preparedness.

The aftermath of Hurricanes Harvey, Irma and Maria renewed calls to fortify Caribbean cities. Recently, the Inter-American Development Bank pledged U$1 billion in loans to support a more resilient Caribbean.

The hurricanes that recently battered the Caribbean left few communities untouched. But the approximately 4.4 million people living in low-elevation coastal zones (LECZs), coastal areas less than 10 meters above sea level, paid a particularly heavy price. Coastal cities in the Caribbean face a dangerous confluence of heavy rain, erosion, and damaged mangroves which increase their vulnerability to extreme events. As a result, more than 36 million people have been affected by storms and flooding in the Caribbean since 1900, according to the Emergency Events Database (EM-DAT).

How the Caribbean Can Prepare for More Violent Hurricanes

As financing from governments, multilateral organizations and civil society grows, a variety of plans have been proposed ranging from wetlands restoration, the construction of breakwaters or, most popularly, updating building codes. Proponents of this last idea point to Florida as an example of what updated codes can achieve; after Hurricane Andrew in 1992, the state increased enforcement and instituted new building codes that have since reduced insurance claims and minimized the destruction of hurricane-force winds. Grand Cayman has drawn similar attention given its adoption of the Southern Building Code Congress International (SBCCI) Standard Building Code in 1995, which lessened the impact of Hurricane Ivan in 2004.

But while building codes indeed are a key driver of resilience, their impact should not be overestimated. Three conditions need to be in place to ensure that they fulfill their potential.

Each hurricane season provides a laboratory for climate modelers to test standards for hurricane-resistant windows, foundations and roofs. The unprecedented maximum gust speed of Hurricane Irma (185 mph) exceeded the Organization of Eastern Caribbean States (OECS) building code regulations for Antigua & Barbuda Anguilla, British Virgin Islands, St. Kitts & Nevis, and Montserrat.  As we look to the future, codes may need to accommodate higher wind speeds given the increasing size and magnitude of hurricanes. Building codes should not be viewed as static tools, but as living documents that adjust to new information on hazard modeling and rainfall.

Given that building codes are still voluntary in many Caribbean countries, it is critical that standards become embedded in government construction bids and contracts, including those structures financed by donor institutions. The UK Department for International Development (DFID), for example, requires their funding for hospitals in the Caribbean to adhere to strict codes for disaster resilience. As for the residential sector, governments are increasing acknowledging the high costs of quality building materials and the reality that compliance is economically unattainable without new partnerships and home improvement subsidies. The Government of Suriname, for instance, has provided discounted building materials to certified community-based organizations trained in housing construction, which led to the repair and expansion of thousands of homes.

Enforcement is critical. Urban planning institutions with adequate staff are urgently needed to review building proposals and inspect structures during construction. The experience of urban planners who tend to focus only on the built environment needs to be complemented with the experience of a new generation of professionals trained in hydrology, coral reef monitoring and coastal conservation. A recent publication by the Inter-American Development Bank (IDB), A Blue Urban Agenda: Adapting to Climate Change in the Coastal Cities of Caribbean and Pacific Small Island Developing States, provides examples of how city officials in the Caribbean are including this new perspective in urban planning.

One of those examples is Barbados’ Town & Country Development Planning Office, which has established coastal landscape protection zones to prevent development in erosion-prone coastal cliff areas and to protect from the impacts of extreme storm events. Planners are also evaluating construction permits using a “ridge to reef” approach  which  takes into account the impact of development on tidal zones, reefs, and seagrass beds. Likewise, planners in riverside cities such as Paramaribo are funding new linear parks that similarly control for flooding and provide vibrant public spaces.

A shortcoming of building codes when it comes to disaster preparedness is that they are often only applied to new construction in the formal market. Older structures are exempt from new rules and informal settlements are often overlooked. But low-income groups often settle in areas prone to flooding, such as wetlands and riverbanks. Indeed, more than half of the squatter settlements in Kingston, St. Andrew and St. Thomas, Jamaica are within 100 meters of a waterway susceptible to flooding.

The reconstruction of Haiti following the 2010 earthquake underscored the need to support local masons and builders with the tools and equipment they need to truly enable housing self-recovery. We must avoid cultivating isolated islands of excellence and instead promote neighborhood-based interventions that reflect beneficiaries’ needs and financial resources. As the study on post-disaster shelter response in Haiti, What Did We Learn?, declares, “the challenge is not to build houses, but to provide housing options that are economically and socially sustainable for both owners and occupants.” Guyana offers an excellent example of this approach as officials help residents improve building standards of existing homes over time. Through these efforts, the Government of Guyana has partnered with community-based organizations to improve 20,000 homes.

Beyond concrete and mortar, building resiliency in these areas also requires a sensitivity to the Caribbean’s overlapping land tenure systems, which include a centuries-old family land system that emerged from collective rights given by emancipated slaves to their descendants, informal settlements on private or state-owned land, and a modern system of titled properties in complex property registries. Efforts to recognize the continuum of land tenure, such as Trinidad & Tobago’s Certificate of Comfort, which provides land rights to occupants on state land, can open the door to climate-proofing these homes.

Preventing future destruction by hurricanes will require a serious commitment to coastal governance that transcends the false dichotomy that divides land from sea and an Urban Development Ministry from an Environment Ministry. Beyond the Habitat III global New Urban Agenda, it will also require regionalized urban policies that reflect the unique climactic vulnerability of Small Island Developing States (SIDS) in the Caribbean. ECLAC’s timely release of the draft Subregional Action Plan for Implementation of the New Urban Agenda in the Caribbean (see here for public consultation) is a strong move in the right direction.  Better coastal planning now will ultimately reduce the cost of future reconstruction and ensure a more inclusive discussion around resilience.

*  A version of this article originally appeared in Americas Quarterly.