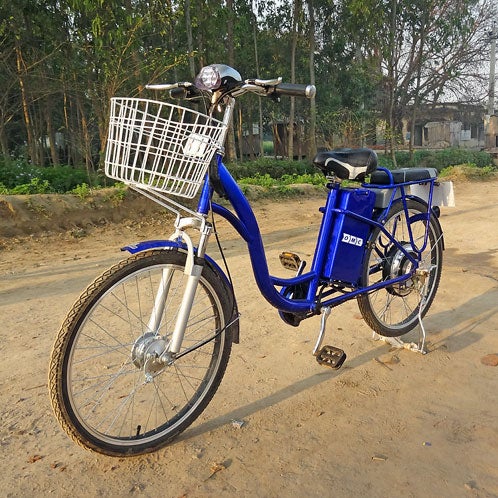 In aspect and basic design, electric bikes, or e-bikes, do not differ from the traditional two-wheel, human-powered bicycle. E-bikes simply add a nifty feature to the centuries-old crank technology: a rechargeable, battery-powered motor that supplements pedaling speed for the rider in need, whether on a steep hill or during a particularly long-ride.

E-bike users in Buenos Aires, Argentina. The small fleet was purchased by the city’s Environmental Protection Agency in 2011 and are available for public use.

I would never give up my old road bike—per Ivan Illich, “the bicycle creates only those demands which it can also satisfy [whereas] every increase in motorized speed creates new demands on space and time”—yet it is hard not to recognize the electric bike’s merits. Greenhouse gas emissions from e-bikes (which can be plugged into the wall like any other household appliance) are considerably lower than those from other motorized vehicles, such as cars and motorcycles. Indeed, recent studies carried out in China (a country with over one million e-bike owners) show that, even accounting for emissions from factory production and from the generation of electricity needed to power them, e-bikes can perform better even than electric cars, emitting only one-tenth the amount of CO2.

To the extent that e-bikes displace cars and motorcycles, their adoption can reduce net emissions from motorized transport and can be especially attractive to countries with high motorization rates that are interested in switching to low-carbon modes of transportation. A key assumption must hold true for this transition to occur: new e-bikers should be previous bus, car, or motorcycle users (this tends to be the case in China). If e-bikes compete directly with bicycles, the net environmental benefit would be questionable. Nonetheless, considering transportation trends in Latin America, e-bikes could play an important role, especially if local ventures help reduce costs through partial, local production (an entry-level bike can cost up to US$1,000 in the US versus US$500 in Colombia). Countries with prevalent motorcycle use like Uruguay (see Table 1 above) could encourage deployment, especially for drivers with relatively short and frequent commuting trips. Similarly, countries like Brazil, Colombia, and Mexico, where motorcycle use is increasing rapidly, could do well to encourage e-bike adoption (Table 2).

Needless to say, e-bikes are not without impacts. Pollution from electric bikes that use lead-acid batteries (cheaper than the comparatively cleaner lithium-ion pack) is a growing concern in China. And speedier vehicles can much more easily lead to traffic accidents, especially as the distinction between e-bike and motorcycles becomes more and more diffuse. What if the device has an on/off device to ignite the motor? Countries like France and Germany would call this an electric scooter, since it obviates the need for pedals and changes the basic mechanics of cycling. Austrians, in contrast, would still call this model an e-bike, but only if built-in speed stays below 25 km/h, and with good reason. Since ‘slow’ e-bikes can be treated as consumer products and not as motor vehicles, such as cars and motorcycles, you can still use an e-bike on a trail or bike path without particular speed restrictions and you would not need a driver’s license to do so.

The debate about what counts as an e-bike is critical if their use is to be encouraged, since one of the main factors that can encourage new users is supporting infrastructure. If e-bikes retain their character as a motor-assisted bicycle of reasonable speed and do not resemble motorcycles, then improvements to bicycle networks should contribute toward adoption. Studies show that increased bicycle usage depends largely on factors such as the availability of separated bike routes away from traffic and pollution and mixed land-use that bring destinations closer to riders. Infrastructure design would be even more challenging, as dedicated path networks would have to accommodate not just pedestrians and cyclists, but e-bike commuters as well.

We need not focus solely on urban areas. E-bikes may in fact play an even more important role toward both development and environmental conservation in rural Latin America. A few weeks ago, I spoke with Allison Archambault from EarthSpark, an organization dedicated to scaling and multiplying the delivery of clean energy in Haiti; they operate micro-grids to deliver power to rural communities as well as support local entrepreneurs to offer retail energy products and services (follow them @earthsparkintl). Allison directed me to the example of OMC Power, an Indian venture that rents e-bikes in rural communities for US$1 per day; OMC’s solar generators provide recharge power for the bikes. It is easy to see the applicability of this model in rural Haiti, where most people rely on motorbikes and crowded shared rides for short- and medium-length trips for both work and leisure. OMC’s model—provision of a full range of energy and mobility services—can be applied at a relatively smaller scale and can operate with even minimum road network requirements. With vision and entrepreneurship, e-bikes can be much more than an urban privilege.