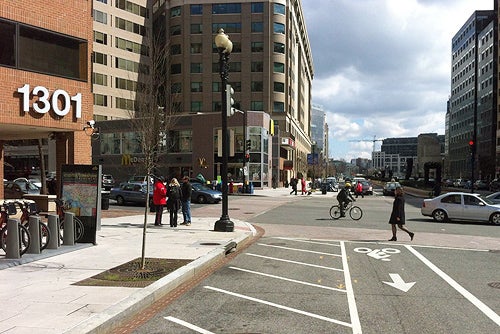 This weekend I read a very interesting study from the Brookings Institution entitled “Walk this Way,” which is an economic analysis of a sampling of Washington, D.C.’s neighborhoods and their economic value. The study had four noteworthy conclusions about D.C.’s walkable areas: 1) walkable urban places are stronger economic performers; 2) linked walkable places – or walkable districts – have higher rents and home values; 3) residents of more walkable places have lower transportation costs, higher transit access, and higher rents; and 4) residents of lower walkability areas are less wealthy and have attained less education that residents of more walkable areas.

As a resident of the District in a neighborhood within walking distance to a metro line, various bus lines, and a plethora of restaurants and shops, I was interested to learn what the premium is that I pay for my walkable lifestyle. Living in a neighborhood that has “good walkability” numerically rated with a 4 on the 1 to 5 scale in the study (1 is the least walkable, and 5 is the most walkable) costs a monthly premium of $301.76 or $3,621 per year more than a person living in a community rated with a 3 and has “fair walkability” on study’s scale.

The next logical question I asked myself is what I am getting for my money? First, let’s uncover the definition of walkability. The Brookings study conceptually defines walkable urban places as “regional serving, high density, mixed-use, and between 50 and 400 acres.” To put this concept in more concrete terms, Walk Score, a company popular in the urban planning community that numerically rates walkability in cities worldwide, describes walkable areas as having the following characteristics: a city or neighborhood center; public transit with a ridership large enough to support it; urban design oriented to promote pedestrian flow; streets designed for bicyclists and transit; mixed-use construction; and public amenities, such as parks.

It’s pretty clear from the study that if you can afford to live, work, or own a business in a highly walkable place, that you can reap tremendous benefits. But, my thoughts now turn to the social dimension of city planning. What happens to a neighborhood that changes from a less walkable place (for example, a 1 level on the study’s scale) to a 4 or 5? Will the creation of walkable neighborhoods, which command higher residential rent and home values, eventually gentrify entire areas? Appendix Table 1 from the study below shows demographic changes between less walkable urban places and more walkable urban places. The comparison shows that the population of the least walkable places (1 on the scale) has lower income, has more incidences of unemployment, is less diverse,  is less educated, commutes a long distance to work, and has less recreation space. The challenge for planners, developers, and elected officials is to create walkable places without making people walk away from their newly transformed and walkable neighborhoods in search of a more affordable one.

Considering the economic benefits, walkability should be a critical part of all strategic growth plans. The IDB’s Emerging and Sustainable City Initiative is trying to promote walkable places in Latin American, and walkability assessments are being carried out as part of the basic mobility studies. In Mar del Plata, Argentina, the IDB is currently doing this assessment and designing a concrete intervention with the Gehl Architects in three selected areas. Stay tuned for our next post describing this exiting project.