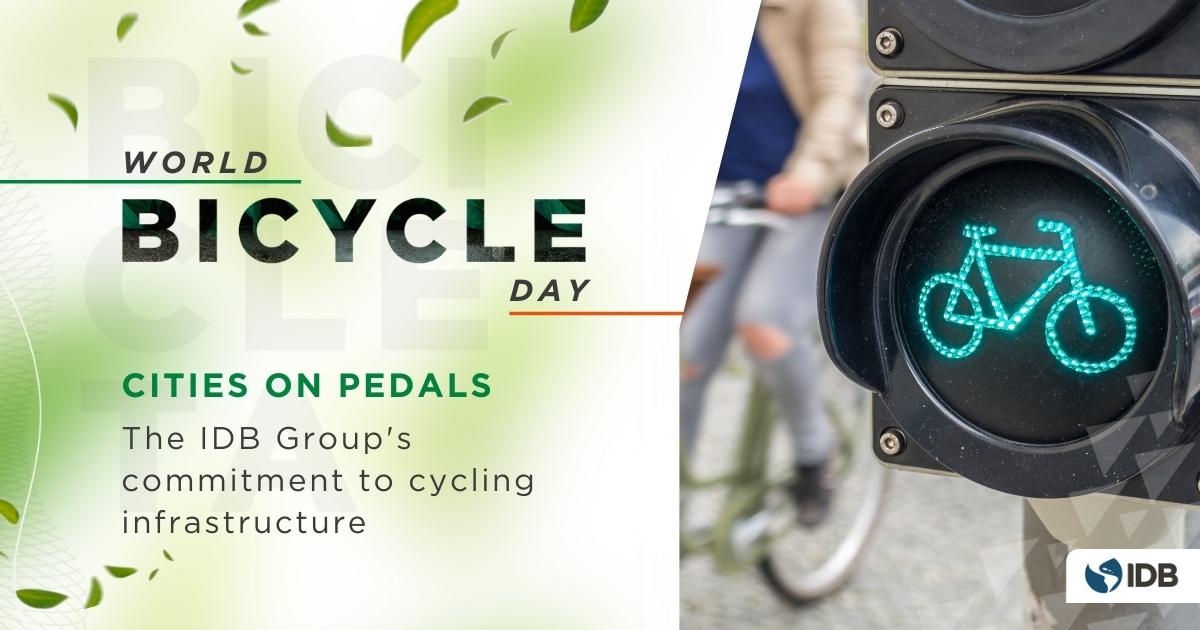 Using the bicycle, instead of motorized vehicles, to move around our cities is becoming more and more popular around the world. The health restrictions of the pandemic were, in many cases, the main incentive for some us to discover the benefits of this vehicle. Nevertheless, at the moment, the increase in fuel prices, as a result of the war in Ukraine, is making of cycling transport to become the best alternative to get around the city in an economical and healthy way. Although it is not a valid option for everyone, either due to physical limitations, health, age, or other factors, the habit of urban cycling may have come to stay.

In 2018, the United Nations (UN) decreed June 3 as World Bicycle Day to promote its use as a sustainable means of transport. On this anniversary, in this blog we address the importance of having adequate infrastructure that facilitates cycling in cities. In addition, we also address the way in which the IDB Group supports the development of cyclist-friendly urban planning in cities of Latin America and the Caribbean (LAC).

The relevance of safe bike lanes for our cities

Cyclists, along with pedestrians, are one of the most vulnerable road groups because, in the event of a collision, they are at greater risk of injury. Bike lanes, also known as cycle paths, or bike paths, are the most appropriate type of infrastructure to facilitate bicycle travel. Although they have different characteristics, in urban areas they are characterized by being an exclusive lane of public roads appropriately marked for bicycle traffic.

These types of lanes offer at least three benefits for the cyclist:

Likewise, bike lanes provide a set of benefits for the city and the neighborhood where they are located:

Given that one of the main challenges at a global level is to reduce the increase in the planet’s temperature caused by greenhouse gases, bike lanes and bicycle transport are an ally to make our cities become more sustainable and healthy spaces.

According to a Greenpeace study, urban mobility generates about 10% of total greenhouse gas emissions, of which self-motorized transport is one of the main causes. Reducing the emissions of harmful gases produced by this type of motor transport is probably the most direct way for citizens to help solve the climate crisis. Traveling by public transport, walking instead of driving short distances, and particularly using a bicycle, are an excellent way to build more sustainable cities.

A recent study in Great Britain has concluded that, if the bicycle (in its electric version) were used to replace self-motorized transport, 0.7 tons of CO2 per year could be saved individually. This is equivalent to half of the harmful gases currently emitted by cars per person. Another study shows that, if one in four residents in Europe chose the bicycle to move around the city every day, around 10,000 premature deaths per year due to pollution would be avoided. It is unbelievable, but air pollution in our cities is reducing global life expectancy by an average of 1.8 years per person. This makes it the leading cause of death in the world! Therefore, having an adequate network of bike lanes, especially in the residential areas of our cities, would not only substantially reduce pollution, but would also have an impact on the health of its inhabitants, in addition to other incredible benefits.

In LAC, the bicycle culture continues to evolve as local authorities work to improve their infrastructure. For example, the Global Bicycle Cities Index (GBCI) 2022 identifies five cities in the region in the ranking of the ninety most cyclist-friendly municipalities in the world. Although the number of kilometers of bike lanes is only one of the factors considered when preparing this ranking, it is exciting to see that the cities of the region do not stop expanding their network of bike lanes. Of the five GBCI cities, São Paulo has almost 700 km; Bogota, 564 km; Santiago de Chile, 400 km; Mexico City, 370 km; Buenos Aires, 272 km; Cali, 192 km; and Medellin, 120 km. This is not little thing…

The IDB Group has been committed to building bike lanes throughout the region for years, financing or providing technical advice to many cities to promote the creation of cyclist-friendly infrastructure. Here are some of the most recent initiatives:

Sustainability and safety with pedals

The IDB Group is firmly committed to promoting more sustainable and safer cities for all its inhabitants. Work is constantly being carried out with authorities and citizens so that the cities of LAC can be traveled and enjoyed safely by bicycle. Although the road ahead is still long, we are getting closer to achieving a cyclist-friendly urban planning.

If you liked this blog, please, do not hesitate to share your opinion in the comments section, and of course, on your social networks!

Daniel Peciña-Lopez is a specialist in international affairs, development and communication. He has more than 9 years of professional experience in diplomatic delegations, and international organizations in cities like Washington DC, New York, Chicago, Madrid, Mexico City and Hong Kong, among others. Daniel is Master of International Affairs from Columbia University, Master of Science from the University of Oxford Brookes and Licenciado from Universidad Complutense de Madrid. He currently works as a consultant managing the knowledge and strategic communication of the Housing and Urban Development Division, belonging to the Climate Change and Sustainable Development Sector of the Inter-American Development Bank.