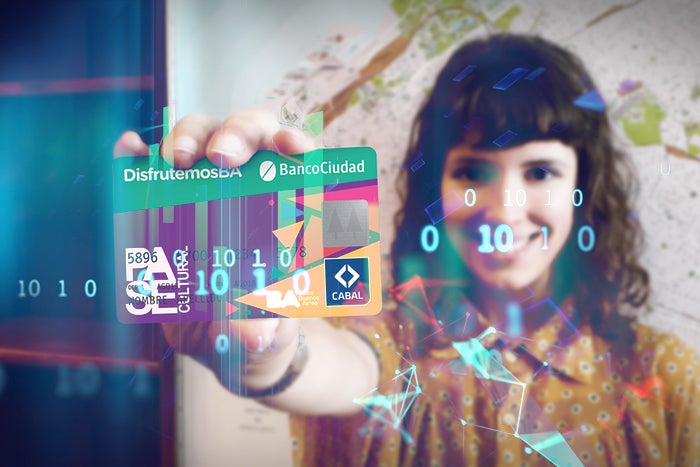 How to improve access to diverse cultural activity to Buenos Aires youth? (ages 15 to 18)

Faced with this question, the city developed the Pase Cultural or Cultural Pass program in 2018, and with the IADB cities Lab,  the first month’s results of the program were assessed to adjust this public policy on an early stage.

The Cultural Pass is a monthly credit card that allows public school youth and teachers to access local cultural offerings like theaters, libraries, and museums, among others.

In the search for a program that effectively increases cultural access for youth, we analyze a series of hypotheses: the relationship between use and gender; the differences in cultural preferences between residents in the formal versus the informal city; and the intensity of use by participants to whom the program was promoted at school versus those that didn’t. We further ask the reason why they don’t go to certain cultural places or events and consider factors like connectivity, agglomeration of supply that played a key role in the use of the pass.

Two main sources of information helped for the hypothesis’s assessment: perception surveys and use data or transactions.

A digital perception survey was developed for implementation in three different free youth cultural events: (a musical concert, literature fair, and youth design fair), to understand youth preferences in cultural consumption. The reasons behind the preferences vary (including “I’m not interested”, “it is too expensive”, “nobody would join me”, among others) and the trends within the cultural subcategories (pop culture, classics, etc).

Among the most interesting results coming from the survey was the order of preferences when given an open budget to consume culture. The cinema is the clear favorite, followed by live music concerts. On the other end, dance, theater and museums are the less favored activities, as most of the surveyed mentioned “I don’t like it” or “I don’t think it is fun”.

The strong tendency of using the cultural pass for movies only, found in both the surveys and the data collected from the transactions, invited us to review the French version of this program which incorporates a selection algorithm that nudges users towards options that are dissimilar to their previous activities. The purpose behind this is that the users experience firsthand the range of options to determine their real preferences and tastes (rather than sticking to what they know).

The cultural pass already registered 15.922 users between its launch in December 2018 and September 2019. The data collected shows the origin and destination of users, frequencies and type of use, and profile of the beneficiary. The “R” app, a programming language specialized in data analysis, facilitated a large part of the discoveries and correlation analysis that will summarized in the following paragraphs.

Georeferencing shows that the cultural offerings are concentrated in the north-central part of Buenos Aires; mapping of socioeconomic status makes immediately evident that the most economically advantaged are concentrated in the north-central area as well, while the most disadvantaged are concentrated in the south of the city (see the map in figure 3). This program has the challenge of making alliances with cultural offerings in the southern sector, distributing concentrated cultural activities, and facilitating free access to culture in all sectors. The program could be articulated with initiatives to promote development in the South – specifically, there are potential synergies with the Arts district in the La Boca neighborhood and sectors of San Telmo, the Design District in Barracas, and others.

Given this agglomeration, all the Cultural Pass transactions indicated that for the lowest socioeconomic decile, a place of cultural consumption is approximately 6,000 meters away from home, while for the highest decile this distance falls to 340 meters. In spite of concerns that the distance to the cultural spots discourages the use of the pass to access culture, we found that the average use among active beneficiaries living in areas of lower socioeconomic level is similar to that of beneficiaries residing in neighborhoods of high socioeconomic status, closest to the supply sites (fig. 4).

By adding the accessibility factor, through public transport, to the net distance and found that the average travel time to use the pass is 37 minutes. Cinema is the most dispersed and recurring sector that receives people nearby or by neighborhood – which may contribute to its popularity. However, there are no clear patterns between distance via public transport and consumption. Young people, both men and women, would be willing to travel not insignificant distances to access the cultural offering of their choice. Furthermore, the subgroup of beneficiaries who live in better-connected, more central informal settlements do not consume more culture through the pass than those who live in settlements on the periphery. However, according to the transaction data, the cost of the trip would directly harm the lower and peripheral deciles. This analysis has consequently suggested an integration of weekend or after school hour trips for Cultural Pass users on the student transport card SUBE.[1]

The consumption of cultural activities within walking distance of beneficiaries’ schools and homes mirror the general preferences for cinema and bookstores, but also shows less willingness to walk for cinemas, considering that the movie projection is the same in all cinemas. Moreover, the walking distance analysis incorporated influence radii from the supply points, showing the areas of the city that would not have access to culture in proximity.  This radio mapping can guide the search for new partners for the cultural pass program.

If we isolate those beneficiaries that subscribed to the pass but have not used it yet, there is not a common profile of the passive pass holder. There is a direct (and logical) relationship between the intensity of use and the motivation of application to the program: as expected, the most frequent users are the ones with previous interest in the program who decided by themselves to go to the webpage for subscription, rather than applying in response to a promotional activity. Moreover, no higher activity was registered among beneficiaries from schools that received an in-person promotion by the ministry (See fig 6a). Therefore, the cost-benefit of the in-person promotion campaign might not be the most effective, and new promotion strategies should be explored.

Inactive pass holders decreased by 3% for each increase in socioeconomic decile. In other words, most of the passive beneficiaries are part of the most vulnerable deciles (See figure 6b).

Finally, there is a clear tendency of higher intensity use of the cultural pass by female beneficiaries. The only users that max out the benefit – spend every cent available per month – are women. This can be attributed to the fact that men selected sports activities over cultural activities in the perception surveys. This highlights the challenge the program faces of capturing male interest.

In summary, the cultural, gender, and socioeconomic factors played a more relevant role than the location for the access to culture (with the exceptions of cinema and libraries where the user seeks proximity).  The analysis even corroborated that the presence of parks, pedestrian areas, and cafes does not have any correlation in the use trends of the cultural pass. While not apparent in current use patterns, the combined use of public spaces and cultural activities might increase recreation and quality of life of beneficiaries. Therefore, this study suggested adding local recommendations on the cultural pass platform, as Airbnb experiences do[2].

The analytical techniques developed to evaluate this program (coding, workflow, testing, etc.) can be reused for the georeferenced analysis of public policies, not just in the cultural sector but in any government area implementing people-based and place-based programs, such as health or education. The code is available for replication or scaling up in any city or program, more details in the upcoming technical blog. Let us know if this approach contributes to your work and how.

[1] SUBE is the public transport system in the city of Buenos Aires. Schoolchildren have 40 free rides in this system per month during school days.

[2] Usually providing just physical or in-place experiences, due to COVID/19 this has also opened to include digital experiences.