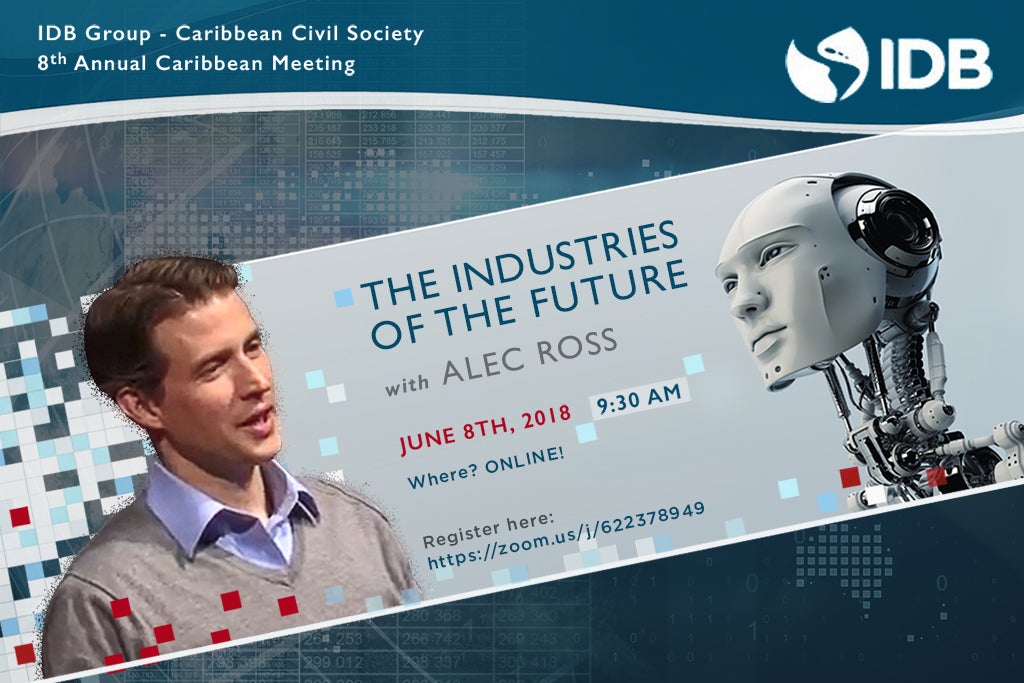 Digital Transformation and Industries of the Future: How can technology and innovation improve people’s lives?

This webinar has concluded. Watch the replay:

Good morning ladies and gentlemen and welcome to this Next Wave livecast that is coming to you from the 8thAnnual Caribbean Civil Society Meeting in Georgetown, Guyana.

In Frey and Osbourne’s seminal paper as well as in Acemoglu and Robinson’s book, they share a great story that somewhat summarizes some of the discussion about technology in the Caribbean. Interestingly enough, it comes from more than 400 years ago:

William Lee had invented the stocking frame knitting machine in 1589, hoping that it would relieve workers of hand-knitting. Seeking patent protection for his invention, he travelled to London where he had rented a building for his machine to be viewed by Queen Elizabeth I. To his disappointment, the Queen was more concerned with the employment impact of his invention and refused to grant him a patent, claiming that: “Thou aimest high, Master Lee. Consider thou what the invention could do to my poor subjects. It would assuredly bring to them ruin by depriving them of employment, thus making them beggars.” I wonder how many of us today know anyone who is raking in the dough by hand-knitting?!

Today we are joined by Alec Ross, New York Times Bestselling author of “The Industries of the Future.” This book explores the technological and economic trends that will shape the ensuing decades, including cybersecurity, big data, genomics and cryptocurrencies. Alec has been recognized as one of the Top 100 Global Thinkers by Foreign Policy Magazine and as one of the ten game changers in politics by Huffington Post. He is the former Senior Advisor for Innovation of Secretary Hillary Clinton. We are also joined by Caribbean visionary, economist and technophile, Therese Turner-Jones, who serves as General Manager of the Caribbean Country Department at the Inter-American Development Bank. Welcome…

Alec Ross is the author of The Industries of the Future, a New York Times bestseller that explores the technological and economic trends that will shape the next ten years, including cybersecurity, big data, genomics and cryptocurrencies. He has been recognized as one of the Top 100 Global Thinkers by Foreign Policy Magazine and as one of the ten game changers in politics by Huffington Post. Alec Ross is the former Senior Advisor for Innovation of Secretary Hillary Clinton.

A national of The Bahamas, Ms. Therese Turner-Jones is the General Manager of the Country Department Caribbean Group (CCB), which oversees the Bank’s operations in Barbados, Guyana, Jamaica, Suriname, The Bahamas, and Trinidad and Tobago. While serving in this position, she will continue to carry out the functions of Country Representative for Jamaica.Ms. Turner-Jones joined the IDB in 2013 as the Country Representative in Jamaica. She has over 20 years of experience in the areas of macroeconomics and economic development, with emphasis on the Caribbean. She has held key positions in the International Monetary Fund (IMF) including, most recently, as Deputy Division Chief for the Caribbean II Division, Western Hemisphere Department, and previously as Advisor to the Executive Director for Canada, Ireland, and the Caribbean. Previous to her work at the IMF, she was the Deputy Manager of the Research Department for the Central Bank of The Bahamas.